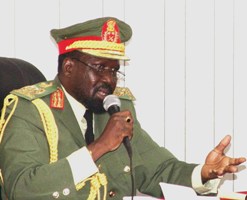 October 6, 2010 (JUBA) – The President of the semi-autonomous Government of Southern Sudan (GoSS) and Commander-in-Chief of the Sudan People’s Liberation Army (SPLA), General Salva Kiir Mayardit, has issued an Executive Order, pardoning senior army officers who rebelled or fought against the SPLA forces before and after April’s elections.

Kiir’s order issued on Wednesday bestows amnesty on Major General Gabriel Tanginye, Lt. General George Athor Deng and Colonel Gatluak Gai. It also urges them to rejoin the rank and file of the SPLA forces and move freely in the South.

The SPLA accused its ex-foe, Sudan Armed Forces (SAF) of supporting the renegade officers saying they serve to destabilize the southern region.

The southern Sudan authorities said last August they impounded in Upper Nile state, a Khartoum-destined cargo helicopter carrying men loyal to Gen. George Athor. However, Khartoum denied the accusation and the plane was moved to Juba for investigations.

Major General Tanginye was accused by GoSS of causing military confrontations with the SPLA in 2006 and 2008, which left about three hundred people dead in the Upper Nile state’s capital of Malakal. General Athor and Colonel Gai have also rebelled and clashed with the SPLA in protest of the outcome of the gubernatorial elections in Jonglei and Unity states, respectively.

Athor, who served and held senior positions within the SPLA, refused to concede defeat and claimed the vote was rigged.

Kiir said that the pardon will not come into effect unless the three officers unconditionally lay down their arms and rejoin the SPLA.

The move comes one day after the ruling Sudan People’s Liberation Movement (SPLM) kicked off preparatory meetings with all the Southern Sudan political parties for the purpose of reaching a consensus on the referendum and post-referendum era.

South Sudan is due to vote early next year on whether it wants to remain united with the north or to become a independent nation.

On Tuesday and Wednesday the Vice President and the Deputy Chairperson of the SPLM, Riek Machar, chaired meetings with 17 southern political parties to discuss the way forward and prepare for next week’s conference.

In a press statement after Wednesday’s meeting, the Minister of Agriculture and Forestry and the SPLM Deputy Secretary General for Southern Sector, Ann Itto, said the parties have agreed on the agenda.

Itto who will also head the Information sub-committee in the preparatory committee added that the conference is to reconcile and achieve a consensus on the upcoming Southern Sudan referendum which should be free, fair and transparent.