Southern Sudan has an area of 640,000 Square kilometers, which is equivalent to 25 % of the total area of the Sudan. It is located at the centre of Sub-Saharan Africa, bordering Ethiopia in the East, Kenya, Uganda and the Democratic Republic of Congo in the South and Central African Republic in the West and Northern part of the Sudan in the North. 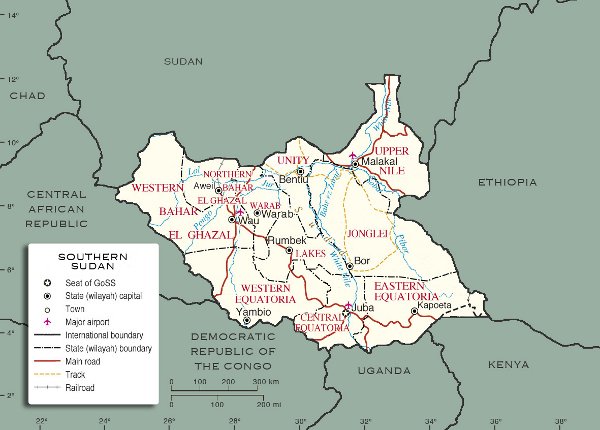 Ecologically, the area has a sub-humid climate and favorable rainfall which is divided into seven agro-ecological zones namely; The Greenbelt, the Ironstone Plateau, the Central and Southeastern Hills and Mountains, the Flood Plains, the Nile and Sobat rivers zone, the arid and pastoral zone and the Central Rain lands.

The rainfall pattern varies by region ranging from 500 -2000 mm per year and provides growing season of 130 - 300 days. Therefore, agricultural performance varies considerably from climate zone to climate zone and from year to year. Furthermore, the temperatures are typically above 25°C, but rise above 35°C, particularly during the dry season, which lasts four months per year from January to April. In terms of resources, the region is blessed with ample natural and human resources that include vast fertile lands, extensive hardwood forestry, large amounts of fresh water and minerals, and variety of livestock. These endowments have made the region suitable for different kinds of agricultural and economic activities, such as production of food and cash crops, livestock and fisheries, production of wood and furniture, minerals, construction of tourism hotels and oil.

The sector is divided into two sub-sectors:

This subsector is largely practiced by majority of rural population for subsistence purposes, with minimal cash crop production. the major crops produced in this subsector includes, Sorghum, maize, Rice, Sunflower, Cotton, sesame, Cassava, beans and peanuts. Other crops that are produced in small scale include: coffee, tea, sugar and tobacco. There is also great potential for growing fruits and vegetables such as bananas, mangoes, lemons, pineapples, onions, okra, tomatoes, eggplants, potatoes and cabbages.

Currently, the region depends totally on food imports from neighboring Countries such as Uganda and Kenya as well as northern Sudan as a result of long civil war. However, the region is rich in forest resources which cover about 29% of the total land area. These forests have different varieties of trees that include indigenous African trees such as, Acacia, Mahogany and Teak which constitute major sources of timber, Gum Africa (Arabic), charcoal and firewood.

Livestock is of great importance to the economy of the Southern Sudanese, especially for food security, employment and culture. It is estimated that Southern Sudan has a total population of 12 million heads of cattle and 11 million heads of sheep and goats. The larger proportion of the livestock is found in Greater upper Nile and Greater Bahr El Gazal regions. Furthermore, the area enjoys a large stock of fish resources in the River Nile and its many tributaries. Therefore, there are more chances for investment in the area of fisheries in Southern Sudan.

The principal constraints among others that face the development of agricultural sector in Southern Sudan include:

The SPLM, which is the main ruling party in Southern Sudan, has critically reviewed agriculture in 2010 to identify its weaknesses, constraints, strengths and opportunities. As a result the party leadership developed comprehensive policies aiming at improving the sectors of agriculture, forestry, livestock and fisheries in order to achieve food security through transforming the subsistence agriculture system to a surplus production system well connected to markets and guarantee households access to food. These policies include the following:

The long war in the Sudan has devastated the basic infrastructure and other all sectors including human resources in Southern Sudan. After the signing of the Comprehensive Peace Agreement (CPA) in 2005, the region was farced by severe difficulties in meeting the expectations of all citizens in food availability and the basic needs. Over the last five years, the international community and friendly countries have supported the GOSS in addressing the following fields:

Although Southern Sudan is currently a net importer of agricultural products, the region has an outstanding natural resource base for the production of wide range of crops, forest trees, fisheries and livestock. Thus, the following sectors are suggested as potential fields for domestic and international investors: