Jieng Council of Elders - UNMISS needs to adhere to its mandates 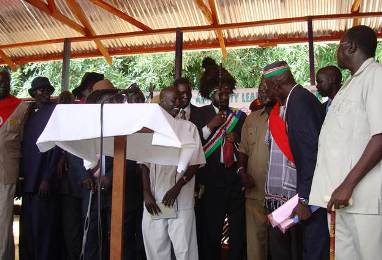 UNMISS NEEDS TO ADHERE TO ITS MANDATES

The Jieng Council of Elders (JCE) is alarmed and deeply regrets the recent remarks by UNMISS Chief with respect to the status of the 28 States establishment order, (EO 36/2015). The UNMISS head said that she does not recognize the 28 states. Obviously, there are pockets of political opposition in the country to the creation of 28 states and so for her to take the same position, as the opposition, is an act of partiality and goes counter to the spirit of the agreement and inconsistent with the mandates of the institutions they lead.

Notwithstanding the fact that she is siding with the opposition on this issue, the UNMISS leader appears bent on encroaching deliberately into the affairs of a sovereign state. It may serve her well to stay out of South Sudanese politics and administrative matters and allow the South Sudanese to chart their course on these matters without prejudice. The council therefore advises the two institutions to adhere strictly to their respective mandates by avoiding unwarranted meddling in the affairs of a sovereign state. With respects to the 28 states establishment order, the council would like to unequivocally reiterate its position as follows:

In light of the aforementioned, the UNMISS leader should conduct herself with utmost composure and great sensitivity required in a divisive political situation such as this and to maintain high level of integrity and impartiality. Instead of fanning political brinkmanship and hatred among South Sudanese with their statements, the  UNMISS leader ought to help the parties to the agreement to expeditiously implement it in spirit and letter, see to it that the badly torn social fabric, which binds our people together at the grassroots, is fully repaired. This is the priority of the highest order for the people of South Sudan and those who are invited to assist the people of South Sudan in this transition should embrace the same categorically.

The council reiterates that this is not the time to play political hardball with the stability of the country.  Any attempt to scuttle the 28 states establishment order will be inconsistent with the ongoing efforts to bring peace and reconciliation in the country. It is therefore imperative to give peace a chance by making sure that the people’s legitimate demands are not subjected to dangerous international machinations. The council stands opposed to any efforts that are flagrantly aimed at delaying South Sudanese’s popular demand for self-government and calls on all peace loving people to reject any misguided actions that go contrary to peace objectives.