By NICHOLAS BARIYO in Kampala, Uganda and JENNY GROSS in London

KAMPALA, Uganda—The presidents of Sudan and South Sudan on Thursday signed several agreements paving the way for resuming vital oil exports and creating a demilitarized zone along their contested, oil-rich border, officials from both countries said.

The pacts mark a partial resolution of issues that have raised the threat of armed conflict between the two states, which created a little over a year ago when the South seceded from Sudan. The deals will allow for the gradual return of about 350,000 barrels a day of South Sudanese crude oil to world markets, where prices remain high.

But uncertainties remain. The countries have yet to resolve at-times lethal disputes over five border areas, including the oil-rich Abyei region. The status of these border areas were left unclear in last year's breakup of Sudan after decades of armed conflict, including two civil wars believed to have left more than 2 million people dead.

“This is a big step forward regarding our relations with South Sudan.” Rabie Abdelaty, Sudanese government spokesman

President Omar al Bashir of Sudan and President Salva Kiir of South Sudan signed eight deals Thursday in Addis Ababa, Ethopia, including those creating a demilitarized zone of 10 kilometers, or about six miles, along their border and allowing the resumption of oil exports.

The presidents of Sudan and South Sudan reached in September a partial resolution of issues that had raised the specter of armed conflict between the two states after the South seceded from Sudan last year. 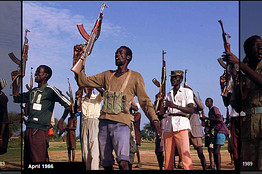 "The presidents have just signed the agreements. This is a big step forward regarding our relations with South Sudan," said Rabie Abdelaty, the Sudanese government spokesman. A South Sudanese spokesman confirmed an agreement had been reached on oil exports and a demilitarized zone.

Sudan and South Sudan are setting dates for resuming talks on Abyei and working out the other unresolved issues, said Mr. Abdelaty. He said Sudan is demanding the South cut ties with and disarm rebels of the Sudan People's Liberation Movement North, who continue to battle Sudanese military in the border states of Blue Nile and South Kordofan.

The White House welcomed what it called groundbreaking deals that make substantial progress in creating two viable, peaceful neighbors and said the U.S. is committed to helping to implement the deals and resolve outstanding issues.

"The leaders of Sudan and South Sudan have chosen to take another important step on the path away from conflict toward a future in which their citizens can live in dignity, security, and prosperity," President Barack Obama said Thursday. "We are hopeful that today's deal can help spur broader progress on resolving the conflict in Southern Kordofan and Blue Nile, securing unfettered international humanitarian access in those areas, and bringing peace to Darfur."

Paul Jenkins, the International Monetary Fund's representative in Sudan, said that the deals are encouraging and enormously beneficial to both countries, but that challenges remain.

"We can only hope that the political and security difficulties do not unwind what is actually a very important and critical agreement," Mr. Jenkins said.

South Sudan gained formal independence from Sudan in July last year after a two-decade civil war. South Sudan retained at least 75% of the former nation's oil fields. But the pipelines, refineries and ports it needs to get its crude to market lie in the north.

Initial optimism over the split soon dissipated as Sudan halted South Sudan's oil exports in January over a dispute about how much the landlocked South should pay to access an export port on the Red Sea. South Sudan refused to pay the high transit fees Khartoum was demanding. It accused the north of stealing its oil, a charge Sudan denied.

The two countries came close to war in April after South Sudanese troops captured and occupied the Sudanese oil town of Heglig. Days of deadly clashes destroyed oil facilities, including a refinery and a processing plant. Both nations' economies have suffered because of the halt to oil shipments, which provided crucial foreign-exchange revenue.

The agreement is a positive step, said Luke Patey, a researcher on Sudan for the Danish Institute of International Studies, adding that continuing fighting in oil-rich Southern Kordofan and the Blue Nile states is a big cause for concern.

"This keeps the ball rolling, but there are a lot of thorny issues still out there," Mr. Patey said. "There are a lot of disturbances out there to disrupt oil should it come on stream in the next couple of months."

The full resumption of Sudanese exports would help ease global oil supplies, as Saudi Arabia and others in the Organization of the Petroleum Exporting Countries have stepped up production to meet rising global demand.

About 1.5 million barrels a day of oil production from countries not in OPEC have been shut over the last several months because of a combination of technical and security issues, according to the International Energy Agency. The supply disruption from Sudan and South Sudan accounts for roughly one-fifth of that.

Ole Hansen, head of commodity strategy at Saxo Bank, said the new agreement will "alleviate some supply worries in the [oil] market," but added that it is unlikely to prompt anything more than a limited slide in oil prices because of nagging fears of a conflict between Israel and Iran.

By mid-afternoon, international oil benchmark Brent crude was trading $1.55 higher than Wednesday's close at $110.24 a barrel.

South Sudanese officials said it may take at least three months to resume shipments. Others predicted a slower return. Consultancy JBC Energy said a full resumption of oil exports from South Sudan could take six to 12 months. Michael Poulsen, an oil analyst at Global Risk Management, said that important oil-production equipment could have been damaged during recent fighting in the border zone and would take time to repair.

The deals signed Thursday were the product of weeks of negotiations. They also include an understanding on the parameters to follow in demarcating the border, an economic-cooperation agreement and a deal on the protection of each other's citizens, Mr. Abdelaty said. Both sides have previously agreed to a referendum over the future of the dispute border region of Abyei, but the terms of the vote haven't been settled.

We have 235 guests and no members online