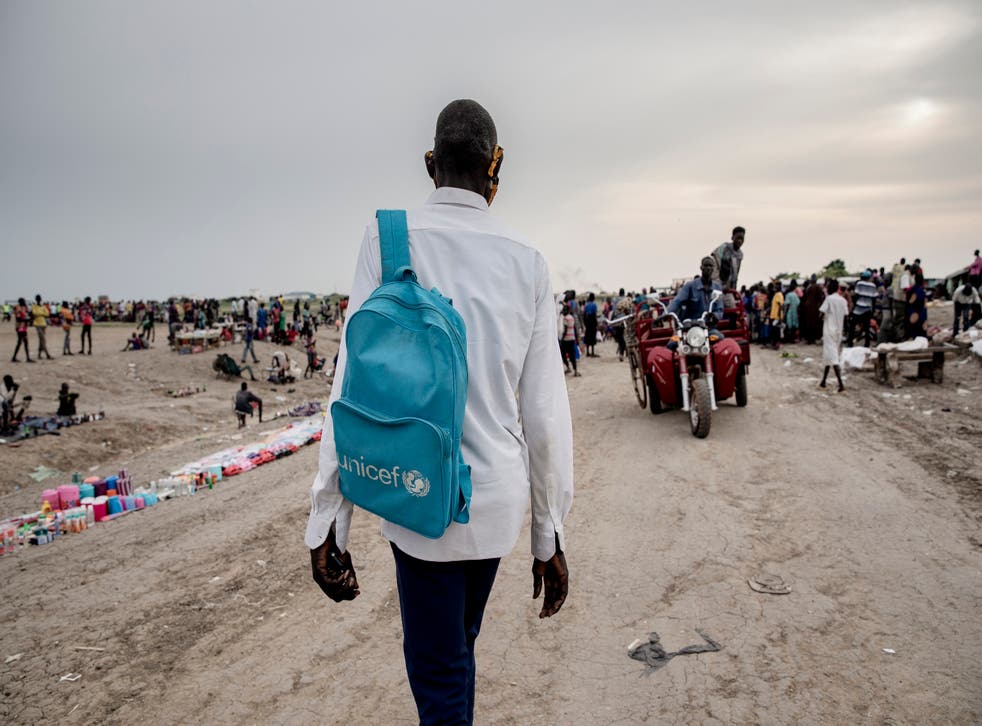 The night after he watched government-allied forces burn his village to the ground, Dhoal Gatwich Gatjani gathered his family and started walking north. He had heard that a United Nations[1] base was offering protection.

As civil war devastated the country in the years that followed, Gatjani and his family were among the 108,000 people who built a life in what became South Sudan[2]'s largest camp for internally displaced people. Inside the barbed-wire fences of the camp in Bentiu, UN soldiers in guard towers provided a measure of comfort.

Then one day this spring, nearly seven years after he arrived, Gatjani looked up and saw that the towers were empty – the UN troops were gone, unable to guard the maze of shelters indefinitely. Replacing them, he soon learned, would be a new police force made up of officers loyal to the two political parties whose fighting had led him here: both the one that he supported, and the one that had sent him running for his life.

“Those who displaced us, who burned down our villages,” the 40-year-old father said, “are the ones who are now supposed to be protecting us?”

As South Sudan marks the 10th anniversary of its independence, the world's youngest country is at a crossroads. Violence remains so entrenched, even though the civil war technically ended in 2018, that Gatjani is among 1.6 million people who have been internally displaced, with 2.3 million more in neighbouring countries.

Frustrated by the lack of progress in a country where two-thirds of residents rely on humanitarian aid, the international community is reassessing the amount of help it can give South Sudan. Donor countries, hit hard by the coronavirus pandemic, have decreased funding, and UN protection forces have shifted from displacement camps to the country’s conflict hot spots. Lawmakers in Washington are calling for an overhaul of US policy on South Sudan, which receives about $1bn (£750m) in US aid annually.

He watched the smoke rise as his village burned. His brother and brother-in-law were fatally shot

The experience of residents in the Bentiu camp may offer a preview of what will happen to the vulnerable as foreign support is withdrawn. Slashed food rations meant Gatjani started eating one meal a day so his children could have two. The deterioration of latrines meant he and his family started using sewage-filled channels. The departure of the UN forces meant they do not leave their hut after dark.

South Sudan's government would like to see the camps close, said deputy foreign minister Deng Dau Deng Malek, because officials believe that cooperation between President Salva Kiir and Vice President Riek Machar – the same two men who plunged the country into civil war – should engender the confidence residents need to return to their villages. But he acknowledged that people could remain in the camps for years, stymied by what he described as a mixture of dependence and genuine fear.

Sitting outside his shelter, covered by a faded UN tarpaulin so old it no longer keeps out the rain, Gatjani put it like this: “I am not happy here,” he said. “But I do not want to die outside.”

Gatjani was among the more than 98 per cent of people in what is now South Sudan who voted in 2011 for independence from Sudan, breaking the nation in two after generations of conflict between the mostly Black Christian south and mostly Arab Muslim north.

The farmer from the village of Nhialdiu hoped that independence would bring roads, schools and hospitals. But this land ranked then as one of the world's least developed nations and still today is near the bottom of the list.

The move for independence was backed by a bipartisan coalition of lawmakers on Capitol Hill and first by the George W Bush administration, which championed the peace deal that led to the independence referendum, and then by the Obama administration. It was Vice President Joe Biden who in 2010 was charged with convincing African leaders that the referendum should go ahead.

Peace did not last long. By the end of 2013, fighting in Juba, the capital, between forces loyal to Kiir and Machar had erupted. Their respective tribes – Dinka, the largest, and Nuer, the second-largest – had long clashed over resources including land and cattle. The fighting quickly spread to the villages, fuelled by outside weapons that in the years that followed would be funnelled through neighbouring countries in violation of arms embargoes. An estimated 400,000 people were killed in the fighting.

Gatjani, a Nuer, was in his home in August 2014 when he heard gunshots. He ran for cover in the trees.

In his absence, his wives were raped and tortured. Both survived. “Torture was the easy thing for them,” he said, compared with the sexual assaults they experienced. “The women who resisted rape were killed.”

Toilets and showers at the Bentiu camp have been left to deteriorate, and no new ones are being built

He watched the smoke rise as his village burned. His brother and brother-in-law were fatally shot.

Fighting led in 2017 to famine in the state Gatjani had fled, with UN agencies estimating that 100,000 people faced immediate starvation. The government was accused of blocking aid for political purposes.

Today, violence is still widespread, with the UN Commission on Human Rights in South Sudan saying “staggering levels” in several regions threaten to spiral out of control. Core tenets of the 2018 peace deal, including creating a unified army, have been repeatedly delayed. Analysts warn that divisions within Kiir’s and Machar’s parties – including recent calls for a leadership change that prompted a government crackdown – risk further instability.

And the population of the Bentiu camp, rather than shrinking as officials had hoped, has grown by more than 10,000 since last year, ballooning in part because of record floods.

The level of US engagement in South Sudan has shifted over time. Biden’s administration has not appointed a permanent ambassador and has not named a replacement for the special envoy to South Sudan. After years of touting the creation of a war crimes court, the State Department this year reverted to the US Treasury the bulk of funding initially put toward the court’s creation. A State Department spokesman cited slow use of the funds by the African Union as the reason for the shift.

Cameron Hudson, a senior fellow with the Atlantic Council's Africa[3] Centre, said many of those who pushed for independence have been too disenchanted in recent years to get involved.

“We've owned it before,” Hudson said of the crisis, “and we don’t want to own it any more.”

He wishes he could work but doesn’t know what he would do. He hears regular reports about violence near his village. And with his home destroyed and the area from which he came facing emergency levels of hunger, remaining in the camp seems the better of two bad options.

Although he feels shame for relying on aid, he said, it means he and his children have a school where they can study each day and hospitals to go to when they are sick.

Every afternoon, he puts on blue trousers and a white button-down shirt and heads to school, where he is learning to read and write English. As he walks, he passes the signs of international investment: the UN tarpaulins covering shelters. Food rations in bags decorated with American flags. A malaria clinic run by Medecins Sans Frontieres (MSF).

The aid has been essential to keeping people alive, said Luka Biong Deng Kuol, a former minister of presidential affairs in South Sudan. But he said it has also propped up a weak, largely transactional national government that has mostly failed to build institutions. Many government leaders, including Kiir and Machar, have been accused of amassing fortunes as the violence escalated, and a recent UN report detailed the extent of continued corruption since 2018.

“The problem is that the aid has become a part of perpetual suffering,” said Kuol, now academic dean at the Africa Centre for Strategic Studies at the National Defence University in Washington.

In Bentiu this year, a void was left when the international community withdrew services.

When the World Food Programme cut rations because of pandemic-related donation gaps – and to make sure it had enough to give to the six counties that the United Nations declared “one step away from famine” – Gatjani started fasting so his children would have more to eat. Still, some of their hair is tinted with the orange that is a telltale sign of malnutrition.

Gatjani's neighbours came down with hepatitis E after maintenance of the latrines was ended, also because of funding cuts. MSF’s head of mission, Bernard Wiseman, described an explosion of cases as part of the camp's “staggering” deterioration.

The UN decision to transfer control of the camps to the government was both a recognition of how the conflict had changed, with more forces needed elsewhere, said Nicholas Haysom, the head of the UN Mission in South Sudan, and an acknowledgement that the United Nations was unable to provide security for so many in perpetuity.

“We’re facing in 2022 a world that is recovering from Covid, that faces a number of other really significant humanitarian crises, not least in this region with Ethiopia,” he said, adding that South Sudan could not “continue to expect that same level” of security support.

The Bentiu police force, he added, is still monitored and mentored by UN forces.

But in the camp, Gatjani and others said, the young-looking forces carrying guns have brought a sense of unease. Gunshots have started ringing out more frequently, he said, and he worries that the forces could turn on the mostly Nuer residents, or turn on each other.

“People are asking,” he said, “what if the fighting starts again?”

He increasingly finds himself regretting his vote for independence. If war begins again, as he expects it could, Gatjani said he imagines people here will be unprotected. He has already plotted how to sneak his children to safety.

Then he said, as he stared toward the barbed-wire fencing, he would see no choice but to return and fight.