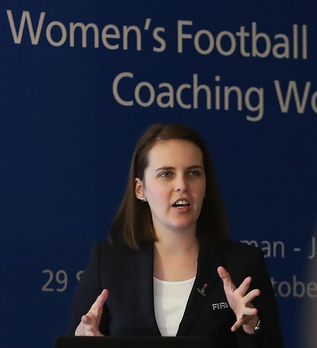 The International Federation of Association Football (FIFA) head of women's football development on Friday inspected the Juba National Football Stadium to evaluate the progress of the construction works.

The FIFA team arrived in Juba Wednesday to make plans to launch a pilot project for women’s football in the country.

Speaking to journalists during the visit to the national stadium, Arijana Demirovic, FIFA’s head of women's football development, said they were looking forward to the completion of construction works at the stadium so that both the men and women national teams can have a home ground.

"As part of this visit, we are also listening to the international stadiums and federation headquarters to understand the progress of the construction of the national stadium,” Demirovic said. “We are very much looking forward to seeing this stadium being finished in order to allow both the men and women national teams to compete and have a home ground. We need to understand that we are here to develop football for both boys and girls, men and women and this stadium will allow them to grow.”

She also said part of her visit includes the plan to launch a pilot project for women football in South Sudan.

“We are here this week visiting the South Sudan Football Association (SSFA) for a women’s football feasibility project that we want to launch in South Sudan as a pilot project. It is a very exciting time for women’s football, particularly because we will be launching many projects here,” she added.

For her part, Nyakoang Gai, the head of women’s football in South Sudan, welcomed the delegation and said the FIFA projects will grow football in the country.

In August, FIFA secretary general, Fatma Samba Diouf Samoura, while on an assessment visit to South Sudan, unveiled plans to launch several projects for football in the country.

We have 190 guests and no members online