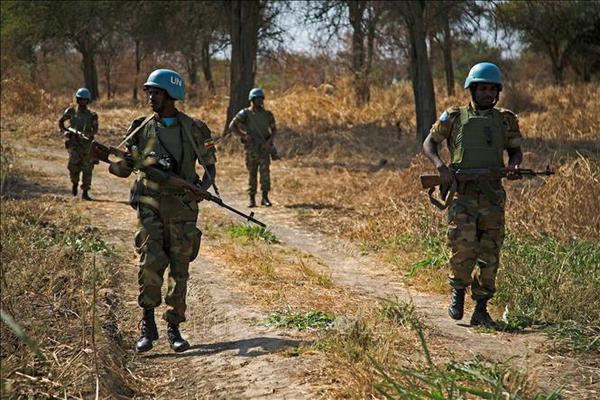 UN peacekeepers patrolling Abyei town in Sudan (Photo: AFP/VNA)
Hanoi (VNA) – The United Nations Security Council (UNSC) on October 27 held a meeting on the situation of Abyei, a disputed area between the Sudan and South Sudan, and operations of the UN Interim Mission in Abyei (UNISFA).

Addressing the event, Ambassador Pham Hai Anh, Charge D'Affaires ad interim of Vietnam to the UN, recognised improvement of bilateral relations between the Sudan and South Sudan, and called on both sides to soon resolve the issue through peaceful means, in accordance with international law and the UN Charter[2].

Expressing concern about challenges facing the UNISFA recently, the ambassador urged all relevant sides, including Sudan and South Sudan to effectively ensure the safety and security of UN personnel and to create favorable conditions for UNISFA to carry out its mandate effectively.

He lauded the efforts of the UN, UNISFA, organisations as well as neighbouring countries and international partners for their engagement with the relevant sides in finding a peaceful solution to the Abyei issue and resolving the ongoing challenges related to UNISFA[3].

Vietnam supports the renewal of UNISFA's mandate, as recommended by Secretary-General and will engage actively with Council Members in the upcoming discussions, he said.

Participants recognised the improvements in the relations between Sudan and South Sudan over the years as well as efforts to resume dialogues on Abyei. However, they also showed concern about the slow progress of the settlement of the Abyei issue as well as difficulties facing UNISFA. They reaffirmed support for the mission and called on Sudan and South Sudan to promptly seek peaceful solutions to the AByei issue and create favourable conditions for the mission to implement its tasks in a full and effective manner.

During the session, the UNSC adopted a Presidential Statement on South Sudan./.

We have 239 guests and no members online