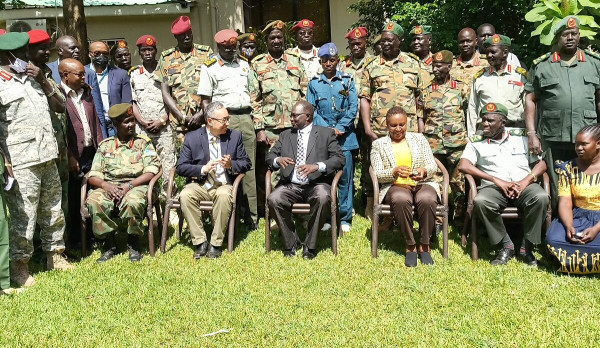 Protecting child rights is a key aspect that the Government of South Sudan and the United Nations Mission in South Sudan (UNMISS) are collaborating on as part of the nation’s bid to establish itself as a true democracy with a spotless human rights record.

A major step forward was the signing of the comprehensive action plan to end and prevent all grave violations against children by all parties to the conflict in February 2020.

Since then, UNMISS, UNICEF and the Government have embarked on a nationwide sensitization and capacity building programme for all stakeholders.

The main aim of the workshop: To educate participants on the six grave violations against children as well as their collective responsibility in ensuring that such abuses do not take place under their command.

“This is a very special day for me because this is fundamental to the work we do jointly with UNMISS in ensuring all efforts are made to implement the comprehensive action plan,” said Hamida Lasseko, Country Representative of UNICEF in South Sudan.

“South Sudan has signed and is observing the Convention of the Rights of Children, so this is extremely important for the children of this nation,” she added.

For his part, Guang Cong, Deputy Special Representative-Political, UNMISS, echoed Ms. Lasseko. “Your presence today strongly signifies the commitment of the Government of South Sudan and the parties to the conflict to protecting children in armed conflict,” he stated, adding that the participation of high-ranked military officers also sent out a clear message of national ownership on child protection concerns as the primary onus of protecting all citizens, including children, lies with the national government.

The long-term objective when it comes to such advocacy is to protect and prevent the occurrence of grave violations against children perpetrated by armed forces and groups. This would ensure that South Sudanese armed groups will, finally, be removed from what is known as the list of shame. The list being referred to is part of the UN Secretary-General’s report on the situation of children in armed conflict and contains national armies and other military groups known to violate one or more of the six grave violations.

These consist of the recruitment and use of children, killing and maiming, sexual violence, attacks on schools and hospitals, abductions, and the denial of humanitarian access to children in need.

Some progress towards this end has already been achieved: By adopting the comprehensive action plan to stamp out violations of the rights of these children, both the South Sudan’s People Defense Forces and the main opposition force have been moved from Section A to Section B of the Secretary-General’s annual report, in recognition of the country’s efforts to implement the action plan and commit to ending grave child rights violations.

But much more remains to be done, as pointed out eloquently by Ayuen Alier Jongroor, Chairperson of the Disarmament, Demobilization and Reintegration Commission.

“The children of South Sudan, our children have suffered immensely. They need all the support they can get, have every chance to complete their education and forge a bright future for themselves. We are obligated to ensure we do everything in our power to make this happen,” he stated.