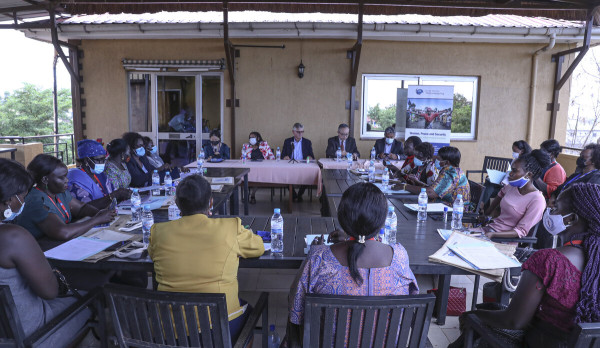 Women and girls suffered huge harm during the civil war in South Sudan. Many were killed or injured. They lost their children and husbands, their homes, and access to education and jobs (UNMISS)

They demonstrated their resilience during the conflict by working the land, risking their lives to support their families by finding food and firewood amidst fighting and the threat of sexual violence, while continuing efforts to resolve conflict within their communities.

Their contribution has never been fully recognized and, following the signing of the 2018 peace deal, they continue to largely be shut out of leadership roles in recovery and peace-building processes, despite repeated calls for inclusion.

Women representatives held a robust discussion with the United Nations Under-Secretary-General for Peace Operations, Jean-Pierre Lacroix, during his visit to the country, expressing the need for urgent action to empower women. For starters, they want parties to the peace deal to live up to their commitment to 35 percent participation by women in all political and governance structures.

“We call on the Government to fully adhere to the gender provision in the peace agreement to ensure women are represented and meaningfully participate at all levels,” said the Chairperson of the South Sudan Civil Society Alliance, Alokiir Malual.

“We also call on the UN and donor agencies to provide finance and technical resources to women to strengthen their leadership, and expand their space, and capacities to engage more effectively and efficiently at all sectors.”

A key concern is the need to urgently progress reform of the security sector, to increase the participation and leadership of women in unified forces and ensure respect for their roles.

“We have reports from uniformed women that, despite the fact they have the same ranks as men, they are treated differently. For example, they are asked to do domestic work in addition to the same official duties as their male counterparts,” said the Chairperson of the South Sudan Women Peace Monitoring and Advocacy Group, Theresa Siricico.

Increasing the presence of women in security forces would have a number of benefits, including improving justice and accountability for crimes against women.

“The inclusiveness of women in uniformed forces will help improve the management of sensitive cases related to sexual and gender-based violence. Instead of exercising their right to silence, those victims will be more open to discussing it and ensure that issues of sexual violence are addressed, said Theresa Siricico.

The women’s groups said there was also a need to urgently progress the constitution-making process and expressed concern about a crackdown on freedom of expression in relation to media and civil society which is vital to establishing a safe space for public debate in the lead-up to elections.

“The empowerment of women in South Sudan is absolutely critical, particularly in view of the fact, that the transitional agreement itself has a very important provision regarding the role of women and the proportion of positions that have to be assigned to women,” said USG Lacroix.

“South Sudan, as well as other countries in this kind of this situation, can achieve durable peace only if there is strong empowerment as well as involvement of society in its diversity and entirety.”

The women also called on the UN to increase the participation of women in peacekeeping in South Sudan, particularly in military roles, to inspire and build the capacity of counterparts in local security forces.

In this regard, the USG held a working breakfast with women peacekeepers, organized by UNMISS’ Gender Affairs Unit, to understand the challenges of working in South Sudan and to seek their advice on how to encourage more women to participate in peace operations.

The peacekeepers explained that their needs must be considered when setting up missions in conflict zones, including ensuring adequate living conditions. There is also the challenge of male colleagues accepting and respecting their contribution, particularly when women are in leadership roles.

“The leadership at the senior level in the UN must understand and address these challenges effectively and ensure the deployment of women across all sectors of peacekeeping missions. I never think a woman can only have certain roles, like being a teacher or a nurse. No, they have the same capacity as peacebuilders, and in fact, can be better peace mediators,” said the Head of the UNMISS Field Office in Juba, Geeta Pious.

It is the same issue when dealing with local society and key stakeholders.

“In conflict-driven countries, men always dominate armed groups and political positions. They don’t always accept a woman coming to talk to them about peacebuilding or peace negotiations, so we have to work for that acceptance. We constantly have to go the extra mile and be thick-skinned, stay strong and build our own confidence,” continued Ms. Pious.

The USG reiterated the strong commitment of the UN to gender parity at all levels of the organization to enhance its credibility, effectiveness, and impact as an organization on the lives of the people it serves.