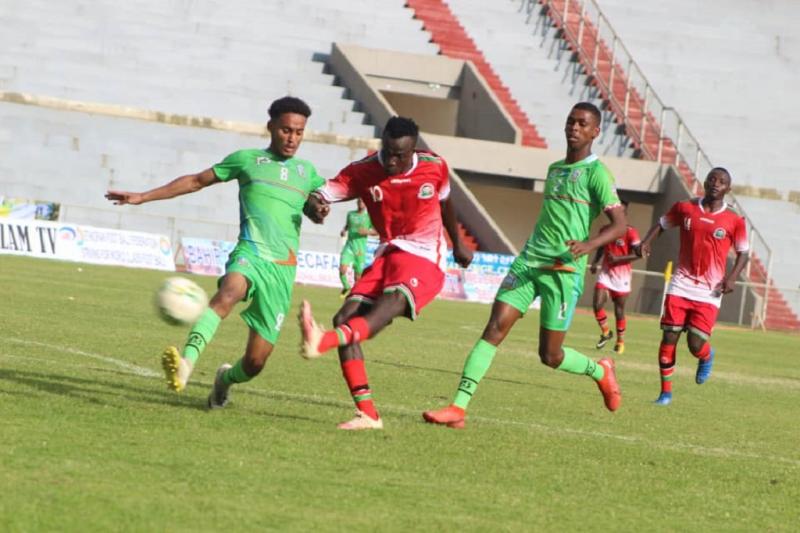 Kenya U23 national team, Emerging Stars, will be seeking to qualify for the semifinals of the ongoing Cecafa U23 Championship in Ethiopia with a win over South Sudan in today's Group C match in Bahir Dar, Ethiopia.

Though the junior national team are considered as favourites heading into the match, head coach Stanley Okumbi has urged his players to draw motivation from their 3-0 thrashing of Djibouti 3-0 in the opening match on Sunday.

The victory saw Kenya go on top of the group with three points, followed by their today's opponents South Sudan who will be playing their first fixture of the tournament, while Djibouti are third.

“Our display against Djibouti was very solid and I know the boys will up their game against South Sudan. I am confident we will get our second win and hopefully progress to the next round of the tournament,” said Okumbi.

“We dominated the game especially in the second half and we deserved to score more than we did but a win is a win and we are all happy for the positive start.”

Emerging Stars only need a draw in their match against South Sudan to proceed to the semifinals of the regional tourney.

Omalla, who scored in the opening match, said he is not only looking forward to increasing his goals tally in the championship but also helping Kenya reach the finals.

“We have been training well and preparing for this championship for a while. We are now here and ready to prove our worthiness. The result in the opening match showed how serious we are and I hope I continue getting the goals to help Kenya reach the finals and win it eventually,” said the former Kisumu Day striker.

The semifinals are slated for July 27 while the final is expected to be played on July 30.

We have 109 guests and no members online