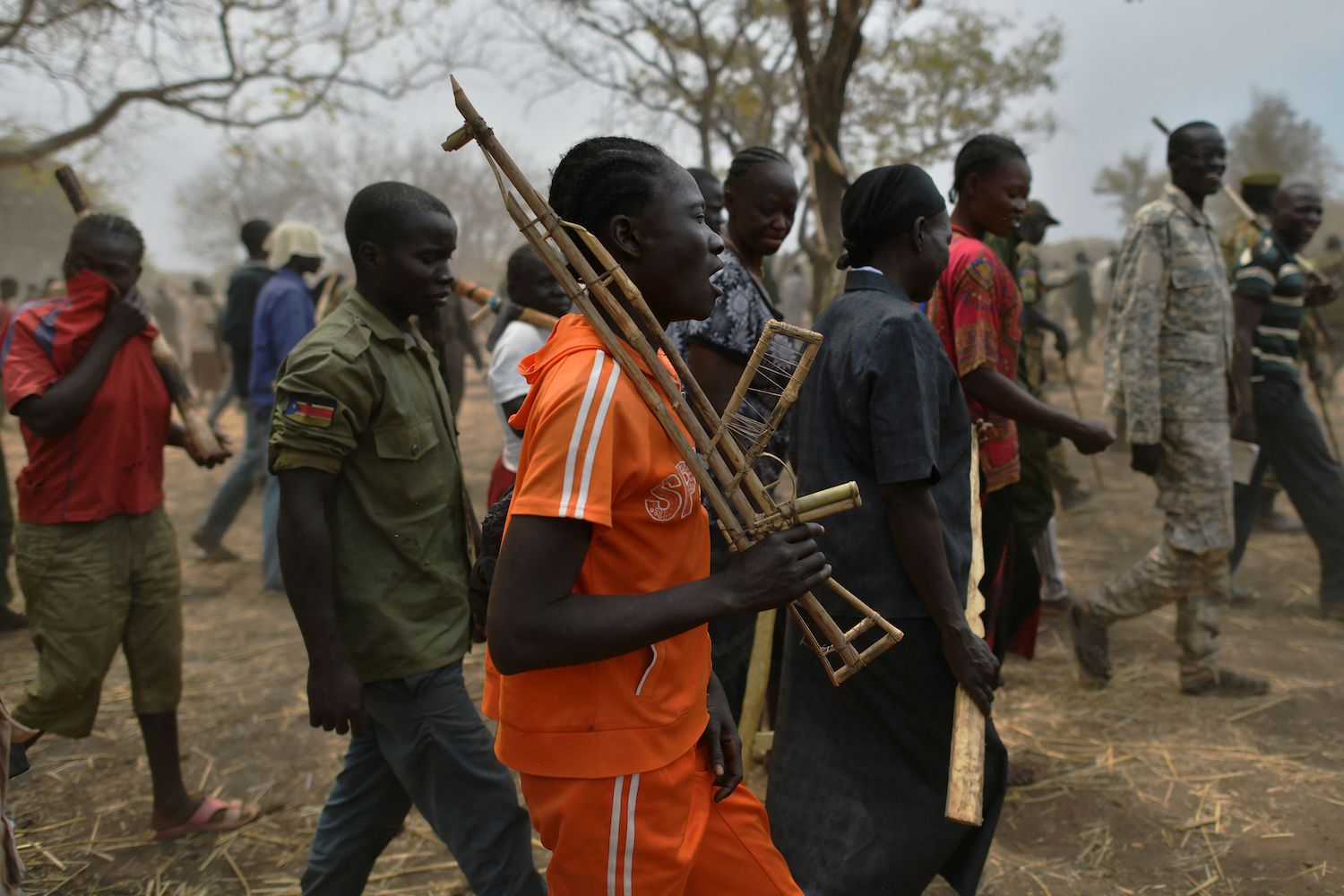 Trainee soldiers for a new unified army attend a reconciliation program at a makeshift barracks run by the United Nations in Mapel, South Sudan, on Jan. 31, 2020. Tony Karumba/AFP via Getty Images

For several years, the United States championed the establishment of a criminal court in South Sudan to hold war criminals accountable for atrocities committed against civilians during the country’s devastating 2013 civil war. But the Biden administration appears to be giving up on the court in the face of South Sudan’s persistent refusal to set up a tribunal that could potentially uncover serious war crimes. In recent weeks, the U.S. State Department has signaled it is planning to reallocate most of the $5 million in funding it had earmarked for the court, sending some back to the U.S. Treasury and another portion to other programs in South Sudan.

The decision to take back the money reflects mounting frustration with South Sudanese President Salva Kiir Mayardit, who recently claimed the court is unnecessary, as well as with his chief rival, Vice President Riek Machar. But it also reflects a certain exasperation with the African Union (AU), which played a critical role in advocating for a regional tribunal to be staffed by AU and South Sudanese lawyers and judges. The AU—which has the authority to set up the court—has been reluctant to move ahead without buy-in from South Sudanese parties.

In 2015, the Obama administration pledged to donate some $5 million[1] to help the court get on its feet. Then-Chairman of the Senate Foreign Relations Committee John Kerry urged the establishment of a “credible, impartial and effective justice mechanism, such as a hybrid court, in order to hold perpetrators of violence to account.”

Six years later, the so-called “AU hybrid court” has still not been formed, and the bulk of U.S. money for the court is set to be quietly returned to the U.S. Treasury or allocated into other programs on South Sudan. The procedural move, though small in monetary terms, signifies a defeat for human rights advocates and the U.S. government’s leadership role in South Sudan’s transition to independence, according to half a dozen U.S. officials and experts familiar with the matter. In their eyes, the move is also a blow to U.S. President Joe Biden’s ambitious agenda to promote democracy and human rights worldwide—and a victory for Kiir’s efforts to stonewall the establishment of the court.

In 2019, the South Sudanese government signed[2] a multimillion-dollar contract with a lobbying firm that included former senior U.S. diplomats to try and convince the United States to “delay and ultimately block establishment of the hybrid court,” according to the contract. The lobbying firm and the South Sudanese government later scrapped the contract and replaced it with a new one that removed[3] the language on blocking the hybrid court, following public outcry from former U.S. officials and human rights groups.

International human rights watchdogs and Western governments have accused Kiir and Machar of running a government riven with corruption and mismanagement and backpedaling on promises to build up a democratic government in South Sudan, despite it receiving more than half a billion dollars in U.S. aid per year since war broke out in 2013. Around two-thirds of South Sudan’s population—7.7 million people[4] out of 11.3 million people—require food assistance, according to data from the U.S. Agency for International Development (USAID), and the United Nations has warned that portions of South Sudan’s population face famine-like conditions.

Without the court, human rights experts fear South Sudanese soldiers and militia responsible for carrying out atrocities, such as mass executions, gang rape, torture, sexual slavery, and the orchestrated starving of civilians, will never be held accountable.

An estimated 400,000 people[5] were killed in South Sudan’s civil war, which erupted in 2013, nearly two years after the country’s independence from Sudan. There are only three recorded cases of conflict-related crimes that have ever been prosecuted from the conflict in South Sudan, according to Nicole Widdersheim, senior policy advisor for the Simon-Skjodt Center for the Prevention of Genocide at the U.S. Holocaust Memorial Museum.

“Thus, the establishment of this court has come to symbolize the only hope for justice for so many,” said Widdersheim, who previously worked on African affairs for USAID and the National Security Council. “If this court is not established, there is no deterrent to committing atrocities against civilians, and there doesn’t seem to be an alternative accountability or justice mechanism for the South Sudanese people.”

A U.S. State Department spokesperson who spoke on condition of anonymity confirmed that $2.15 million in funds unused for the hybrid court would revert back to the U.S. Treasury Department, and a separate $1.5 million grant awarded to the African Union’s Office of the Legal Counsel to set up the court would not be renewed, with that money instead being reallocated to other programs “to advance justice and accountability in South Sudan through other means.”

“We recognized that forming the court without consistent cooperation and support from the government of South Sudan would be a challenge and have regularly engaged with the AU on ideas to make progress on justice even in the absence of clear cooperation from South Sudan,” the spokesperson said.

Behind the scenes, several officials describe frustration and exasperation with the African Union for bungling the efforts to establish the court.

Their public account of the situation appears to differ from what the U.S. State Department has presented on its efforts to support the hybrid court’s creation. In the State Department’s 2021 annual report[6] to Congress on genocide and atrocities prevention, released on July 12, the department reported: “In South Sudan, State coordinated financial and political support to establish an African Union hybrid court to investigate and prosecute perpetrators of war crimes and crimes against humanity.”

The State Department spokesperson said the department’s focus is on “pressing the government of South Sudan to live up to its commitments and to manage our foreign assistance resources as effectively as possible to advance U.S. priorities, including achieving justice and accountability in South Sudan.”

Several U.S. officials and congressional aides said they are frustrated that senior leaders in the Biden administration aren’t doing enough to use the United States’ significant diplomatic and financial clout to publicly or privately pressure either the African Union or the government of South Sudan to break through six years of impasse and establish the court.

“Our diplomatic might has not matched our investment and our responsibility,” said one Senate aide, speaking on condition of anonymity. “Pumping close to or more than a billion dollars a year into a country to keep people alive, to help keep the peace, and then also having that historical tie to helping establish an independent South Sudan … does not match the kind of investment we are putting into this.”

“It’s our impression that everyone agreed to support this, and then nothing happened,” added another senior Democratic Senate aide. “The South Sudanese, who agreed to it, may have never intended to do it, and the Trump administration probably didn’t care. It is also quite possible that the international community never considered it a priority and just dropped the ball. We are concerned about this because many atrocities were committed in South Sudan and people should be held accountable, so we are trying to get to the bottom of it.”

The proposal for a South Sudanese hybrid court has its roots in a 2015 African Union commission of inquiry report[7], which established that forces loyal to South Sudan’s Kiir and his renegade vice president, Machar, engaged in mass atrocities during the country’s civil war.

Both Kiir and Machar committed to creating the mixed tribunal, which was to be administered by judges and prosecutors from the African Union and South Sudan, in two U.S.- and African Union-backed peace agreements. First, in 2015, the Sudanese leaders agreed to participate in an AU-led effort to establish the tribunal. But the government never moved forward. In 2017, the effort got a boost when South Sudanese leaders, along with the African Union and the United Nations, negotiated the terms of a memo of understanding and a draft statute for a new court. Again, the South Sudanese government dithered.

Kiir and Machar agreed again in 2018 to set up a criminal tribunal, but the commitment has been short lived. In a recent interview with Kenyan news outlet Citizen TV, Kiir said it would be better to establish a truth and reconciliation commission, along the lines of what South Africa did.

“[The] hybrid court will not solve the problems of South Sudan,” Kiir said. “You cannot bring justice or peace through [a] hybrid court. We would want the truth and reconciliation process to start.” Kiir warned that the prospect of war crimes prosecutions or indictments would prompt powerful South Sudanese to “pack and go back to the bush with their forces.”

The effort to stand up the court has “hit roadblock after roadblock, and identifying the precise obstruction has been a challenge,” said Elise Keppler, an expert on the court negotiations at Human Rights Watch. Keppler said much of the responsibility for inaction rests with the African Union, which she insists has the legal authority to stand up the court even in the face of opposition from Sudanese parties.

Keppler defended the U.S. role in pursuing a South Sudan court, saying, “I assure you the U.S. is not the problem here.”

“The U.S. has been a huge proponent of justice for grave crimes in South Sudan; they have encouraged the creation of the court and made significant funding available for its creation,” she added.

Peter Ajak, a South Sudanese scholar and former political prisoner in the country, said part of the problem was the United States largely stopped paying attention to South Sudan under both the Trump and now Biden administrations—despite the U.S. role in midwifing the country and pouring billions of dollars’ worth of aid into it.

“Since the time the peace agreement was signed and John Kerry made that pledge and the money was put on the table, South Sudan has just dropped off the list of priorities for U.S. foreign policy,” Ajak said.

Many of the officials who helped orchestrate South Sudan’s independence—including Susan Rice and former U.S. ambassadors to the United Nations Samantha Power—now hold senior positions in the Biden administration. Other government posts remain empty; Biden’s nominee to be the top diplomat for African affairs, Mary “Molly” Phee, has yet to be confirmed, although her Senate nomination hearing is scheduled for Tuesday. The U.S. ambassador post in South Sudan has been empty for more than a year, held on an interim basis by a lower-level diplomat in an acting capacity. U.S. Special Envoy for Sudan and South Sudan Donald Booth is scheduled to step down from his post in the next two months, and it is unclear if he will be replaced, according to several diplomatic sources.

“Many of these people that would actually be shaping South Sudan policy have not yet even been confirmed,” Ajak said.