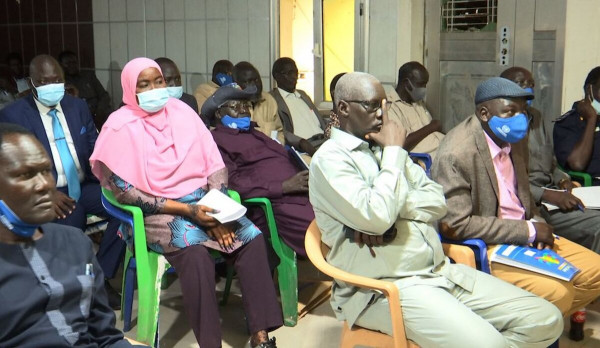 The thirteen county commissioners in Upper Nile State have pledged to work tirelessly to promote peace, reconciliation and development in their respective areas.

“We need to embrace unity in our counties, divide things equally and establish new policies that create harmony. We must set aside our political difference and work for a common, greater purpose,” boomed Dok Guot Ngor, Commissioner of Renk County.

Mr. Ngor spoke at the first get-together of the county commissioners since the appointment of the Upper Nile State Governor, in March. Like his peers, and due to precarious road conditions, he was transported to the workshop in Malakal, organized by the United Nations Mission in South Sudan, by means of boats and aircraft made available by the peacekeeping mission.

“We have brought you together with the hope of helping you build a way of governance that is participatory, consensus-oriented, accountable, transparent, responsive, effective and efficient, equitable and inclusive and that follows the rule of law,” said Christian Mikala, Acting Head of the UNMISS field office in Malakal, adding that working in this manner will also help advance the implementation of the revitalized peace agreement.

Apart from the all-male group of county commissioners, a number of executive directors, ministers and advisors participated in the discussions, and four women could be spotted amongst them. Exchanging views on how they, as local authority figures, can work to prevent local intercommunal conflicts and hence also facilitate the creation of a unified national army was a key element of the workshop.

The transitional state unity government of Upper Nile State, established as part of the revitalized peace agreement signed in September 2018, was the last one in South Sudan to be formed. The major political parties are represented at the county level, and workshop participants stressed the importance of them having opportunities to get together.

“They [these meetings] are key to bring peace to our people, because when we can share our views and experiences, we can learn from each other and move forward,” said Dak Tut from Longichuk County.

According to Jimmy Okumu, a Civil Affairs Officer serving with the peacekeeping mission, the plan is that all the county commissioners will meet again in six months to evaluate achievements, challenges and the best ways to move forward towards the elusive holy graal: peace for all.

We have 112 guests and no members online