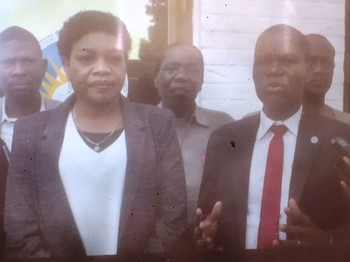 The South Sudan minister of public services Joseph Bangasi Bakasoro is in Wau, Western Bahr el Ghazal state to streamline the pension system as the ministry plans to pay off pensioners across the country.

Speaking after he arrived in Wau on Thursday, Bakasoro said the ministry could not pay pensioners since independence because the plans were disrupted by the civil conflict in the country.

“I have just arrived in Wau on two important issues the key one is to discuss and understand the pension scheme in Wau. We had been receiving a lot of pensioners coming to Juba asking for their pension money and their files and so far. So we decided to come here with the managing director of the pension to come and study, to know and verify what are those problems that are facing pension in Wau,” said Bakasoro.

The minister stressed that his ministry will ensure all pensioners are paid their dues.

“We need to take care of the pension money of all the pensioners because, at the end of the day, every person would want the pension on time but because of the conflict, we were unable to prepare ourselves to pay the pensions,” he said.

Bakasoro added that his visit is also to disseminate the revitalized peace agreement in the region urging the people to participate in its implementation.

On her part, Western Bahr el Ghazal State Governor Sarah Cleto welcomed the visit and underscored the importance of an effective pension system.

“We welcomed the visit because it's important for us to ensure that the pension scheme and system is going well and also our public service servants also are taken care of when they reach their pension ages in the future," she said.

The governor also said the state ministry will work with the national ministry to streamline the pension system.