How British aid abandoned the girls of South Sudan 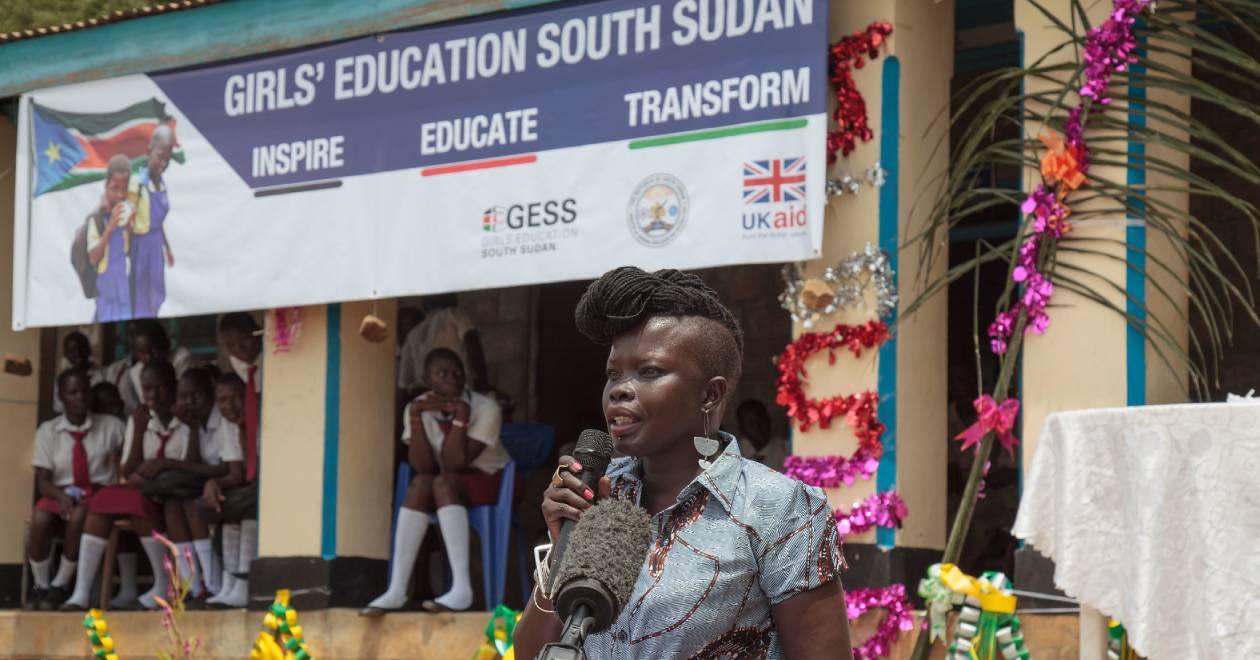 After fleeing South Sudan when she was eight years old, Akuja returned in 2004 to help leads the Girls’ Education South Sudan (GESS) programme which, up until this year, was supported by UK aid.
Credit: Bruno Bierrenbach Feder/DFID - UK Department for International Development. Licensed under CC BY-NC 2.0

UK funding must urgently be restored to those in desperate need, says educator Rod Hicks.

After fleeing South Sudan when she was eight years old, Akuja returned in 2004 to help leads the Girls’ Education South Sudan (GESS) programme which, up until this year, was supported by UK aid. Credit: Bruno Bierrenbach Feder/DFID - UK Department for International Development. Licensed under CC BY-NC 2.0[1][2]

Last month I was reading the BBC’s report[3] about Boris Johnson urging more support for girls education in poor countries where he stated – correctly in my view – that educating girls is the smartest post-Covid investment. As I was reading it, an email dropped into my inbox telling me that the programme on which I had worked for several years, funded by the Girls’ Education for South Sudan (GESS), was being suspended due to budget cuts.

The programme was just one victim of the UK government’s deep cuts in aid from 0.7 per cent of our Gross National Income to 0.5 per cent. This might not sound so dramatic until you factor in that our national income has also fallen this past year and that much of the aid budget is in fixed costs, such as to commitments to UN bodies and long-term employees, which means that the cuts amount to a 50-per-cent drop in funding for aid programmes.

This is a tragedy for girls of South Sudan. Over the last five years the GESS programme has been transformational. Funded jointly by the government of South Sudan and the UK, it enabled hundreds of thousands of girls to go to school by tackling obstacles such as poverty, insecurity and discriminatory cultural norms. It was a model of British aid at its best, working with both communities and the South Sudan government in a long term, collaborative initiative.

Now, as a result of the British Government’s foreign aid cuts, not only will such programmes no longer be implemented but those already running successfully are being cut midway leaving the girls concerned stranded and out of school.

Under the GESS programme in which I was involved, close to 2,000 untrained teachers (male and female but the latter prioritized) were selected for accelerated courses specially designed to enable them to become professionals. The programme was led enthusiastically and actively by the Ministry of Education, who saw it as central to their plans for improved quality in education as over half the teachers in South Sudan are at present untrained, and was supported by Windle Trust International (WTI).

It was one of several exceptional programmes funded by GESS. It would give these teachers a career, make them better educators and improve learning for the children they taught. By withdrawing funding at short notice, the UK government has reneged on its commitments to communities and partner governments and is guilty of outright hypocrisy in claiming to support and prioritize girls’ education on the one hand while axing a proven success story.

It doesn’t make financial sense either. The $500,000 that has already been spent on this programme will be wasted – these teachers are being abandoned half way through their courses; what kind of value for money is that? How will these teachers, pupils and parents trust the UK government again when it breaks its promises so easily? The money that has been ‘saved’ is much the same as that already spent (now wasted): a further $600,000 that was needed to complete the project and fulfil the commitments – hardly an amount that will make any difference to the overall budgets of the sixth richest country on earth.

That is just the programme in which I happened to be involved. Many other similar programmes are also being cut or reduced. Girls who had for several years relied on micro-grants to enable their families to keep them in school may now have to join the many drop-outs with no future.

This disaster for girls’ education in South Sudan comes on top of the disaster of Covid-19. School closures have led to many girls dropping out – as many as 85 per cent of girls disappeared in their final two years of secondary school, according to the WTI[4]. This means that only 15 per cent of those attending school 18 months ago are still registered to take their final exams. Without these exams and a secondary-school leaving certificate they are not eligible for any higher education and will find it very difficult to get a job in the formal sector.

A similar pattern occurs for those in the final years of primary school. It is a real emergency, which requires immediate international support to get girls back into school as they re-open – not after another round of funding discussions – otherwise all the progress made by GESS over the last five years will be lost and the millions spent to date will be wasted.

For individuals, the UK pulling out midway is calamitous. The untrained teachers may carry on for a few years but will be unappreciated and have no respect within the schools. As more teachers qualify they will be dropped, and as with other school drop-outs, will return to being girls within the family whose only role is to look after and obey the men.

However, the tragedy is wider than the loss of any future for individual girls. Had they qualified as teachers or gone on to university would have been the role models for all the girls in their individual communities, encouraging the next generation to aspire similar futures and to the society starting to accept that the natural progression for able girls is to study and get professional jobs and take lead roles in the schools and their communities.

One excuse for these cuts is the strain that Covid-19 has imposed on the government’s budget. However, that strain is negligible compared to the burden that impoverished South Sudan schools and community has been put under by Covid-19.

The increased poverty in South Sudan as result of the Covid-19 lockdown has resulted in early pregnancies and early marriage of girls due to desperate parents trading in their daughters for dowries (paid in cattle and goats) in order to survive. (These are the two main reasons given by parents to WTI for their girls leaving school in the last year in such numbers). The UK is cutting aid at the moment when it is most desperately needed by the girls of South Sudan.

And it is not only happening in South Sudan. The Director of Street Child wrote in The Independent about how they have also had to close down their very successful girls’ education programmes in Nepal and in the Democratic Republic of Congo. Street Child showed courage in publishing this – it begs the question, why are all the larger NGO’s in education not shouting out louder and protesting for the girls whose education is being curtailed?

We must push for the aid budget to be restored. While it was disappointing that the House of Commons bid to reverse the cuts was defeated in its first attempt earlier this week, MPs must push for a bill or an amendment that ensures the aid commitment – stated in the Conservative Party manifesto and the law as it stands – to 0.7 per cent is maintained.

It’s time to protest when a government can waste money already spent, destroy the future they had promised girls, let down their partners on the ground and reverse so many promises already made and then chair the G7 group as it opens today on 8 June and claim to be leading the fight for girls’ education.

Rod Hicks is an Education Adviser to WTI in South Sudan.

* An earlier version of this article said that micro-grants to girls in South Sudan had been cut when they in fact are being reduced. This has now been corrected.

Patreon is a platform that enables us to offer more to our readership. With a new podcast, eBooks, tote bags and magazine subscriptions on offer, as well as early access to video and articles, we’re very excited about our Patreon! If you’re not on board yet then check it out here.

We have 268 guests and no members online