S. Sudan bandits to face the court martial over illegal possession of firearms 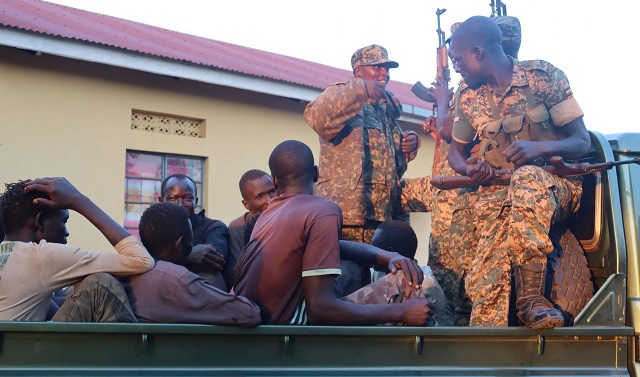 Kitgum, Uganda | THE INDEPENDENT | Four suspected South Sudan bandits intercepted in Orom East sub county in Kitgum district will appear before the Military Court-martial for illegal possession of a firearm and ammunition, the army has revealed.

The suspects were arrested by Uganda People’s Defense Forces soldiers following a botched cattle raid in Lucom village in Okuti Parish on April 10, 2021. The army recovered three guns including a mark five and two submachine guns with live ammunition from the suspects.

Although Kitgum district security committee had announced plans to return the suspects to South Sudan for trial, the army says the suspects will now appear before a Ugandan military court.

Brig William Bainomugisha, the Fifth Infantry Division Commander confirmed to Uganda Radio Network on Tuesday that the suspects are in their custody and won’t be handed over to South Sudan authorities.

Brig Bainomugisha says the suspects will be arraigned before the fifth Infantry Division Headquarters in Achol Pii on an undisclosed date pending the completion of their investigations. He says the suspects contravened the law when they crossed into Uganda illegally with firearms and live ammunition and must face justice.

The army along with Kitgum district leadership released 15 South Sudan bandits without charge in January this year after illegally crossing into Kitgum and Lamwo districts with firearms. The suspects were arrested on separate dates between October and December 2020.

However, Brig Bainomugisha says that the kind act performed with respect of the East African treaty on regional peace and security won’t be extended to the suspects due to repeated incursions of armed men from the neighboring South Sudan.

He assured the locals of Orom sub-county and other border areas that the army has heightened deployment to avert further influx of armed men both from South Sudan and Karamoja region.

The development has since sparked applause from some local leaders in Orom and Orom East sub-counties who had earlier demanded punitive action against the suspects. Tiberio Oyul, the LCI chairperson of Orom East village has welcomed the move taken by the army to try the suspects in the Court Martial rather than repatriate them.

Oyul says the move will deter other groups who have been taking advantage of the repatriation to cross into Uganda. Illegal possession of firearms without valid licenses is an offence in Uganda contrary to section 3 (1), 2, (a) and (b) of Uganda’s Fire Arm Act 299 and can attract a jail sentence not exceeding ten years in prison.

We have 279 guests and no members online