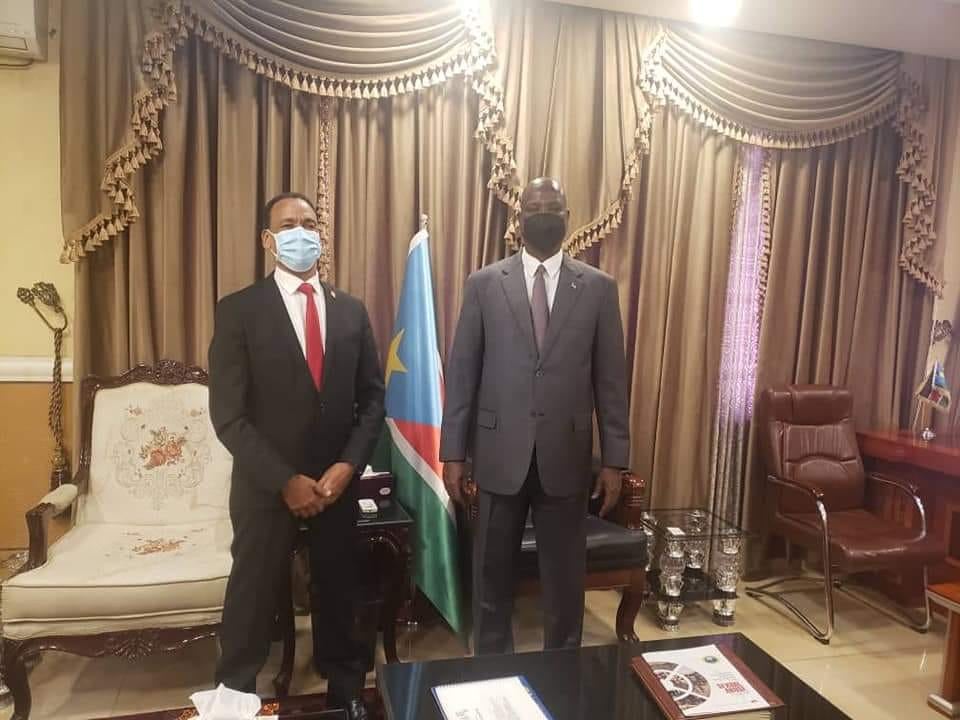 Ambassador Nebil Mahadi met with Taban Deng Gai, Vice President and Chairman of Infrastructure cluster of the Republic of South Sudan, and discussed issues of common concern of the two countries.

At the occasion, the ambassador stated despite changes of governments, Ethiopia’s support to South Sudan is consistent and he reiterated this continues in ensuring peace implementation, infrastructural and economic linkages.

Highlighting the recent status of the situation in the Tigray region, the ambassador briefed about the Ethiopian government’s law enforcement operation’s aftermath humanitarian relief engagements amounted up to more than 70% and restoration commitments of infrastructures that were deliberately damaged by the TPLF clique in the region.

Concerning the GERD, he expressed that it is a pan-African project and intended for power generation. Affirming the fact of more than 65 million Ethiopians have no access to electric power, the ambassador said, Ethiopia is urging Egypt and Sudan to respect its sovereign right to use Nile water for current and future generations.

Clarifying Ethiopia’s position is a win-win solution; he stated that Ethiopia has never an agenda of harming downstream countries.

The ambassador also underscored that GERD has so many advantages for the downstream countries, for instance, the first filling of it rescued Sudan from the devastative flooding, he added.

Taban Deng Gai, on his part, expounding the deep-rooted and interrelated people-to-people good relation of the two countries, said Ethiopia is a giant of the region and its peace is very vital to South Sudan and the whole region as well.

Stating his pleasure on that peace is being ensured in the Tigray region and the Ethiopian government’s commitment in engagements of humanitarian and restorations of normalcy in the region, the vice president denounced those who try to exploit Ethiopia’s internal situation for their own political means at the expense of Ethiopians.

The vice president also said the GERD, since it is the source of green energy, is believed to benefit Ethiopia and the region. He stated further Nile River-nature’s gift is the resource of all the riparian states, more than enough for all, and should be utilized among all the states to not harm one another.

Finally, the vice president explained the importance of linking the region through road infrastructure.

We have 299 guests and no members online