Death toll from violence in Sudan's West Darfur rises to 83 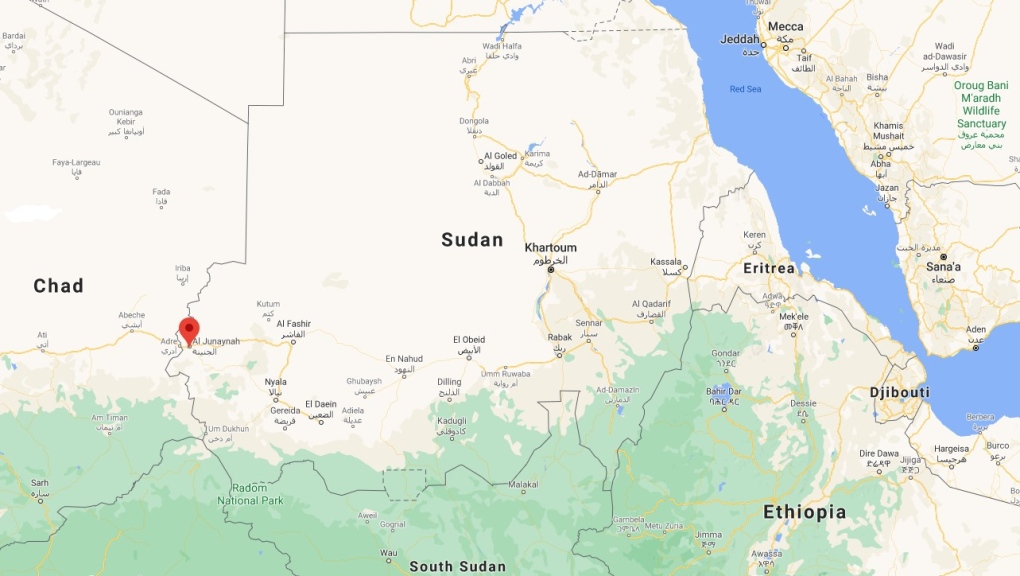 Sudan, with Genena marked, is shown in this Google Maps image. (Google Maps)

CAIRO -- The death toll from violence between Arabs and non-Arabs in Sudan's West Darfur province climbed to at least 83, including women and children, a doctor's union and aid worker said, as sporadic violence continued Sunday.

The ruling sovereign council met Sunday and said security forces would be deployed to the area.

The deadly clashes grew out of a fistfight Friday between two people in a camp for displaced people in Genena, the provincial capital. An Arab man was stabbed to death and his family, from the Arab Rizeigat tribe, attacked the people in the Krinding camp and other areas Saturday.

Among the dead was a U.S. citizen. Saeed Baraka, 36, from Atlanta, had arrived in Sudan less than two months ago to visit his family in Darfur, his wife, Safiya Mohammed, told The Associated Press over the phone.

The father of three children rushed to relieve a neighbour amid the clashes in the Jabal village in West Darfur, when he was shot in his head Saturday, his brother-in-law Juma Salih said.

Baraka's wife said the U.S. Embassy in Khartoum phoned her to offer condolences. The embassy did not return phone calls and emails from AP seeking comment.

The violence led to local authorities imposing a round-the-clock curfew on the entire province. Besides the 83 killed, at least 160 others were wounded, according to Sudan's doctors' committee in West Darfur. It said there were troops among the wounded.

It said clashes subsided by midday on Sunday and the security situation started to improve.

The committee is part of the Sudanese Professionals Association, which spearheaded a popular uprising that eventually led to the military's ouster of longtime autocratic president Omar al-Bashir in April 2019.

The clashes pose a challenge to efforts by Sudan's transitional government to end decades-long rebellions in areas like Darfur, where most people live in camps for the displaced and refugees.

Sudan is on a fragile path to democracy and is being ruled by a joint military-civilian government.

UN Secretary-General Antonio Guterres "is deeply concerned" about the violence and "calls on the Sudanese authorities to expend all efforts to de-escalate the situation and bring an end to the fighting," his spokesman, Stephane Dujarric, said.

The bout of violence came two weeks after the UN Security Council ended the joint UN-African Union peacekeeping force's mandate in the region. The UNAMID force, established in 2007, is expected to complete its withdrawal by June 30.

It also puts into question the transitional government's ability to stabilize the conflict-ravaged Darfur region.

Salah Saleh, a physician and former medical director at the main hospital in Genena, said clashes renewed Sunday morning at the Abu Zar camp for internally displaced people, south of the provincial capital.

He said most of the victims were shot dead, or suffered gunshot wounds.

Adam Regal, a spokesman for a local organization that helps run refugee camps in Darfur, said there were overnight attacks on Krinding. He shared footage showing properties burned to the ground, and wounded people on stretchers and in hospital beds.

Authorities in West Darfur imposed a curfew beginning Saturday that includes the closing of all markets and a ban on public gatherings. The central government in Khartoum also said Saturday a high-ranking delegation, chaired by the country's top prosecutor, was heading to the province to help re-establish order.

A database by the UN Office for the Coordination of Humanitarian Affairs, OCHA, showed that inter-communal violence across Darfur region doubled in the second half of 2020, with at least 28 incidents compared to 15 between July and December 2019.

West Darfur province experienced a "significant increase" of violence last year, with half of the 40 incidents reported in the entire Darfur region, OCHA said Sunday.

We have 263 guests and no members online