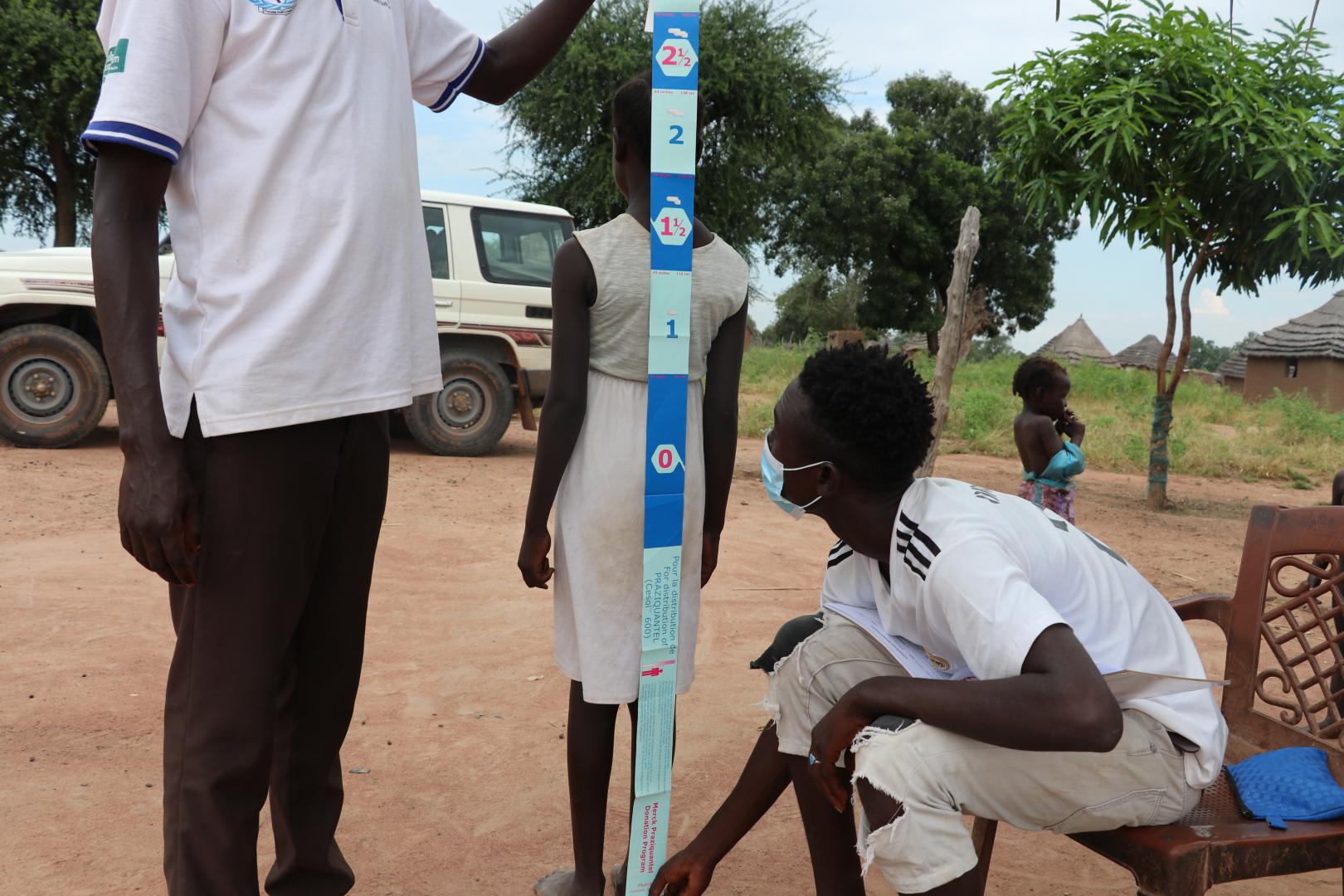 On a busy Sunday morning at Rumbuol village in Aweil East County, Northern Bahr el Ghazal state, the bilharzia mass drug distributors started their daily house-to-house visit to ensure they reach eligible children, regardless of whether they are infected or not, to receive the treatment they need.With a broad smile of hope on his face, Ateny Kuel, a 10-year-old received his first-ever dose of bilharzia treatment. He is among the over 700 000 children receiving treatment from mass drug administration.

“I am so excited that my children including Ateny have received the treatment which will protect them from the disease”, said Ms Mary Alek, a 39-year-old mother of five. Thanks to the Ministry of Health and the World Health Organization, the treatment has given us a breath as the service has been brought to our house.

“Now I know why these children have been passing blood in urine and stool”, said Ms Alek. “My children along others swim in dirty water sources which put them at high risk of acquiring bilharzia, a threat to the health of our children”.  Bilharzia is a disease that leads to chronic ill-health. Caused by a parasite found in snails living in water, the disease affects mainly children. It causes abdominal pain, diarrhoea, bloody stool, or blood in the urine. In children, it may cause poor growth and learning difficulty. The parasite enters the skin of the children when playing in water.

Despite the devastating impact of COVID-19, the Ministry of Health and the World Health Organization (WHO) are conducting community-based mass drug administration (MDA) against bilharzia targeting over 700 000 children aged 5 to 14 years in 15 endemic counties of Lakes and Northern Bahr el Ghazal states.

The initiative is in line with efforts that are underway in Africa to eliminate targeted neglected tropical diseases such as bilharzia, river blindness, elephantiasis, intestinal worms and trachoma by the year 2030 using WHO’s recommended strategy of preventive chemotherapy and transmission control.

WHO is supporting the Ministry of Health to strengthen sustainable mass drug administration structures as a primary control strategy to prevent and treat residents for bilharzia in endemic areas of the country within the national and WHO guidelines for implementing mass campaigns in the context of COVID-19.

Despite some challenges that need to be addressed to fully control and eventually eliminate the transmission of the targeted neglected tropical diseases, efforts by the people and Government of the Republic of South Sudan, WHO, The Carter Center, Christian Blind Mission, Accelerating the Sustainable Control and Elimination of Neglected Tropical Diseases  and others is commendable, said Mr Samuel Makoy, Director for Neglected Tropical Diseases at the Ministry of Health.

The programme treatment coverage goal is to reach at least 75% of the eligible population of the country in all endemic areas.

According to the mapping exercise conducted in South Sudan in 2018, the three states were found to be highly endemic, justifying mass drug administration, hence community awareness and involvement are key to reduce or eliminate the disease.

“While these mass drug administration programmes have seen considerable successes, treatments implemented predominantly through school-based initiatives and community centers targeting school-aged children must be repeated once a year to reduce heavy-intensity infections”, said Dr Olushayo Olu, WHO Country Representative to South Sudan. MDA leaves no one behind and is by far one of the best-buys for universal health coverage.

Dr Olu pledges WHO’s continued commitment and support in accelerating interventions to eliminate neglected tropical diseases in line with the World Health Assembly and the WHO African Region Regional Committee resolutions of 2013.

Between 2016 and 2019, the Ministry of Health with support from WHO mapped for bilharzia, elephantiasis, intestinal worms in 57 of the 79 counties that had mapping gaps to understand the endemicity for a targeted response.

We have 345 guests and no members online