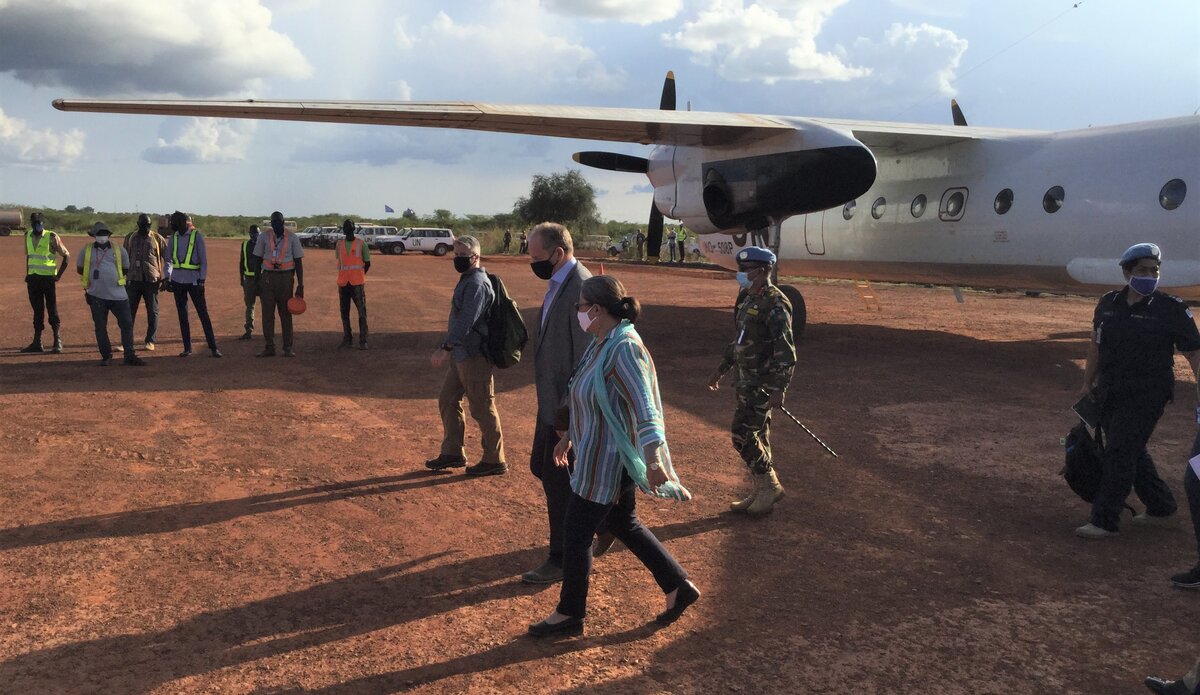 From 14-16 October 2020, the Special Representative of the UN Secretary-General and Head of UNMISS, David Shearer, visited Bentiu and Malakal for the first time since the coronavirus-related lockdown in South Sudan. SRSG Shearer met with representatives of displaced communities, state officials and humanitarian partners.

“I was worried that the United Nations was withdrawing its peacekeepers completely from the protection site. But now I know they will still support us and I’ll tell the community to ignore any rumours suggesting otherwise,” says James Akuch Ayiik Adwok.

As the chairperson of the Peace and Security Committee at the Protection of Civilians site in Malakal, James Adwok, was reassured about potential changes to the camp after a discussion with the Head of the UN Mission in South Sudan, David Shearer.

On his first visit to the region since the COVID-19 lockdown began in March, the UNMISS chief prioritized meetings with displaced communities living in the protection sites next to UN bases.

“I know that some people are nervous about the transition of POC sites into conventional protection sites,” said David Shearer. “But I want those who are displaced to know that UNMISS is here. We are not going anywhere. We are committed to providing protection and peace-building across the region.”

When fierce fighting broke out in South Sudan in 2013, thousands of people fled to UNMISS bases across the country. The peacekeeping mission opened its gates to provide them sanctuary and established what are known today as Protection of Civilians or POC sites.

Seven years later, following a ceasefire and peace deal, political violence has significantly reduced, with hundreds of thousands of people returning to their homes. Displaced families living in the POC camps are also moving freely to towns to shop, work and attend school.

Given there is no longer an external threat to the sites, they are gradually being re-designated as conventional displacement camps under the sovereign protection and control of the South Sudan government.

Despite the change, no-one will be forced to leave and humanitarian services will continue.

“Reducing the number of peacekeepers on static duties at these sites will enable us to do what we came here to do in the first place—protect all civilians who are in imminent danger to the best of our ability,” said David Shearer. “We can do more patrols in areas where there is real need, be more agile and effective, and build capacity among local law enforcement.”

Humanitarians support the decision by UNMISS to extend its protective presence.

“This is the right time for UNMISS peacekeepers to go beyond the POC sites and extend their presence across South Sudan where people are in dire need of humanitarian assistance and protection,” said Ruger Kahwa, Field Coordinator, OCHA Bentiu.

“As humanitarians, we are often looted and, at times, killed when we try to reach places where communities need our help. An increased UN presence and patrols in such hotspots will contribute immensely to making sure food, medicines and nutritional supplies reach intended beneficiaries safely.”

The increased ability to train and mentor local police officers is another positive outcome of the new approach, according to UNMISS Police Commissioner, Unaisi Bolatolu-Vuniwaqa.

“In South Sudan, the police play a key role in ensuring the safety and security of all citizens, including displaced people,” she said.

“On the visit with the SRSG, we’ve spoken to local counterparts about how UNMISS can support the South Sudan National Police Service to achieve their primary responsibility—serving and protecting all communities across this country.”

During his visit to Bentiu, David Shearer spent time at the joint police control centre where local law enforcement officers are working closely with UN Police to improve safety for residents.

In Malakal, he visited the Teaching Hospital, which was renovated by Rwandan and Indian peacekeepers, as well as the UNMISS-funded COVID-19 isolation centre.

“It’s been a long time since I have been able to come here because of COVID restrictions but I can see the positive changes,” said David Shearer. “There’s much more life as well as more choices in the market place. Its great to see people moving around and children going to school.”

“Our hope is that displaced communities get to experience this freedom and security as well and can ultimately return to their former homes to rebuild their lives.”