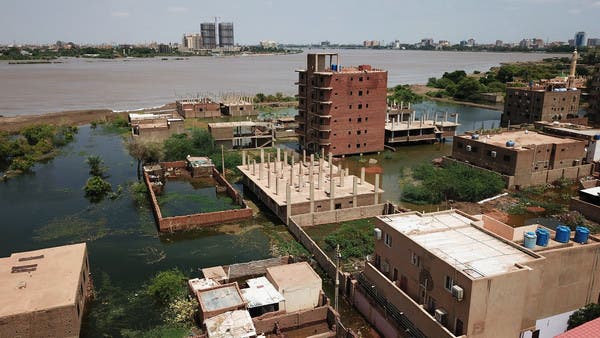 An aerial view shows buildings and roads submerged by floodwaters near the Nile River in South Khartoum. (Reuters)

Severe flooding in South Sudan has forced more than 600,000 people to flee their homes since July, the United Nations said, after months of torrential rains caused the Nile to burst its banks.

The impoverished East African nation is struggling to recover from a five-year civil war and was already suffering severe food shortages.

For all the latest headlines, follow our Google News channel online or via the app.[1]

Scientists say the unusual rains are caused by a cyclical weather pattern that has been exacerbated by climate change.

Costs for delivering aid have risen with the need to protect aid workers and families are forced to squeeze together on thin slivers of land.

“With the flooding, people had to move to higher ground and there’s not much higher ground,” he said on Thursday during a visit to flood-hit areas.

He said the UN had allocated $10 million to help flood victims but needed $40 million more by the end of the year.

Around him, families waded through water or tried to herd bedraggled chickens away from sodden piles of belongings.

Kok Manyok, 70, said he was sleeping under the trees after fleeing from his village Dorok in August with his grandchildren.

“The water level reached almost halfway up my body,” he said, motioning to his chest as he spoke in his native Dinka language.

“There are no shelters for me and my grandchildren, our cattle are gone and we are sleeping under a tree.”

Families were living off of leaves and sorghum, said Matthew Hollingworth, the country director of the UN’s World Food Program (WFP).

“That is not enough to keep them healthy and fit,” he said. Some food was due to be distributed next month but there was not enough to go round, he said.

South Sudan’s civil war erupted two years after the country won its independence from Sudan in 2011 and ended with a peace deal signed between the main parties in 2018.

But not all armed groups signed the deal and low-level clashes, banditry and attacks on aid workers continue.

The conflict displaced around a third of the 12 million population, creating the worst refugee crisis in Africa since the 1994 Rwandan genocide.

We have 226 guests and no members online