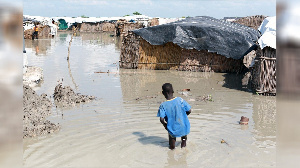 Heavy flooding has affected 500,000 people in central South Sudan, according to the UN mission in the country

The states of Lakes and Jonglei have been worst affected.

The head of the mission, David Shearer, told the UN Security Council on Wednesday that heavy rainfall and flooding of the Nile River had devastated parts of the country.

“Humanitarians are working incredibly hard to help people living without shelter, food, water, and sanitation in the middle of the rainy season,” Mr Shearer told the council via video link from the capital, Juba.

Mr Shearer added that there had been “an upturn” in conflict from splintering of armed groups.

He said while the situation had calmed down, “tensions remain high” and effort must be made to stop a resurgence.

GhanaWeb is not responsible for the reportage or opinions of contributors published on the website. Read our disclaimer.[3]

We have 168 guests and no members online