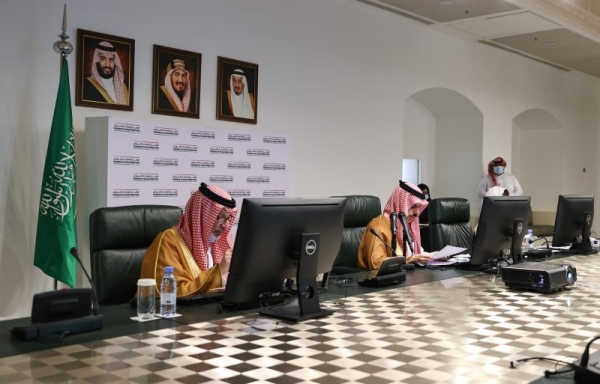 RIYADH — The “Friends of Sudan” held a high-level virtual meeting here on Wednesday to discuss the challenges the country is facing and to coordinate efforts to help Khartoum overcome them.

The eighth meeting of the group, which was hosted and chaired by Saudi Arabia, saw the participation of representatives from key countries and global organizations.

The Minister of Foreign Affairs and International Cooperation of South Sudan, Beatrice Khamisa Wani, and the chairman of South Sudan Government Committee for Peace Mediation in Sudan, Tut Galuak, also participated in the opening session as honorary guests.

The leaders of the Sudan Revolutionary Front, Sudan Liberation Movement-Minni Minawi, and the South Sudanese Mediation Team provided insights on challenges, opportunities, and the way forward to sustainable peace and security.

In addition, the King Salman Center for Relief and Humanitarian Aid Dr. Abdullah Al-Rabeeah and the Saudi Minister of State for African Countries, Ahmed Kattan, facilitated sections of the meeting focused on sustainable peace and economic recovery.

Representatives from Canada, Egypt, Ethiopia, France, Germany, Italy, Japan, Kuwait, Norway, Qatar, Saudi Arabia, Spain, Sweden, the African Development Bank, the African Union and the European Union, the International Monetary Fund, the League of the Arab States, the Netherlands, the United Arab Emirates, the United Kingdom of Great Britain and Northern Ireland, the United Nations, the United States, and the World Bank and the Government of Sudan participated in the meeting. Representatives of the Government of Sudan also participated and presented information on the economic reform process.

The participants engaged in a transparent and candid discussion on the best ways to coordinate support and work with Sudan’s Transitional Government to reach an inclusive and sustainable peace as well as economic stability and prosperity during this critical time in the history of Sudan.

The “Friends of Sudan” noted developments in relation to the mediation efforts of the Government of South Sudan and expressed their appreciation for the important role it played in advancing the Juba peace talks.

The group welcomed the participation of the Sudan Revolutionary Front and the Sudan Liberation Movement-Minni Minawi in the meeting and recognized it as a sign of their goodwill and constructive engagement with the international community to work together to achieve sustainable and just peace in Sudan.

The group urged all those involved in the peace process to seize this opportunity to contribute to and participate in the historical transition of Sudan and further stressed that a mutually agreeable compromise is possible and needs to be embraced.

The Partners for Sustainable Peace in Sudan Declaration (Peace Declaration) was agreed upon during the meeting.

The Declaration stressed the importance of an inclusive Sudan-owned and led peace process leading to a just, full, and comprehensive peace; commended the progress achieved on several negotiation fronts during the Juba peace talks; and expressed major concerns regarding a number of parties who remain outside of the peace process.

In this regard, the Peace Declaration called for all parties to the conflict to engage in good faith in the peace process and refrain from counterproductive demands; it also cautioned that all spoilers to the peace process or the implementation of the Political Agreement and Constitutional Charter of 17 August 2019 may have consequences imposed on them.

The “Friends of Sudan” reiterated their appreciation for the steps taken by the Transitional Government to facilitate full access of humanitarian assistance to all conflict-affected areas.

They shared the concerns of the Transitional Government over the plight of conflict-affected areas, including internally displaced persons, refugees, and other vulnerable groups, especially women and children.

They noted with alarm the increasing violence in Darfur, including the incidents in Kutum, Fata Borno, Nertiti and Mesteri, outbreaks of fighting in South Kordofan and in East Sudan.

In this regard, they urged the Transitional Government to address such incidents with due diligence and take all necessary measures to protect the civilian population, and address deep-rooted causes.

The group welcomed the appointment of 18 civilian state governors, including two women for the first time, and underscored the importance of completing all the steps necessary to form/appoint the Legislative Assembly.

They welcomed the efforts geared towards addressing and the steps taken to fulfill the economic reform and the removal of fuel subsidies on gasoline and diesel. They encouraged the Transitional Government to continue reforms to strengthen governance, public financial management, and domestic revenue mobilization, as well as remove distortions in support of private sector growth.

The group welcomed the political commitment and financial contributions made by the participants at the Berlin Partnership Conference, including the clear signal of re-engagement of the International Financial Institutions with Sudan.

The group agreed to follow-up on these achievements and stressed the need for the continued commitment of both, the Government of Sudan and international partners, to implement the reform agenda and offer support.

The group decided to meet again in this format in October in order to take stock of the various processes, especially the commencement of the IMF’s Staff-Monitored Program currently awaiting approval from IMF Management and Board; the build-up of the Family Support Program which underpins the economic reforms; and to define the next steps of the Berlin Partnership process, i.e. the pledging conference is foreseen for early 2021.