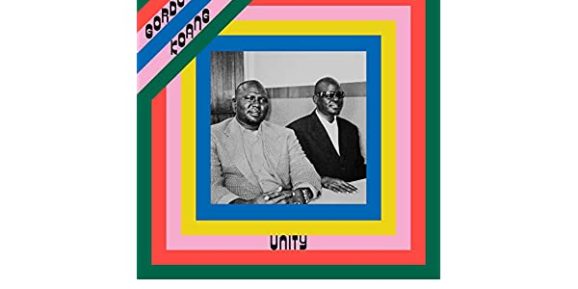 Ex-Sudanese, now Australia-based Gordon Koang’s story is every bit as interesting as his music. Unity is Koang’s eleventh album and first since obtaining residency status in Australia. Koang was born blind and has more to complain about than the sum of a small town of people yet he is a fountain of positivity, always smiling, always willing to lend a hand. Let’s get to his story and address the music a bit later. In his case, they are inextricably linked.

Born in the  Nile Valley in what is now South Sudan, the blind young Koang began playing music by busking on the streets of Juba and producing his own self-released CD-R’s and cassettes, before becoming a crowd favorite and recording a series of singles and music videos celebrating South Sudan’s cultural wealth. His music went viral, spreading throughout the country, and Koang was invited to perform at everything from weddings and political rallies to other events. Crowds would gather to hear his music, predominantly gospel hymns or extended, historical pieces charting the history of the Nuer people and their heroes. Accompanied by his cousin and lifelong companion Paul Biel, Gordon continued to self-produce tapes and CD’s, which eventually changed hands between communities. Before long, Gordon became a grassroots hero, the voice of the Nuer people and a prominent figure in the cultural independence of South Sudan. More recordings and music videos quickly followed, and Gordon’s status as legendary ‘King of Music’ was confirmed.

Urged on by expatriate communities in Canada and the United States, Koang and Biel began touring, performing to packed out halls and churches throughout North America. They then traveled to Australia, where, toward the end of 2013, news reached them of renewed conflict back home. Making a heartbreaking and bold decision, Gordon and Paul Biel decided to stay on in Australia, refusing to board a flight home and instead of applying for asylum in the faraway nation. They left behind wives and children, in the hope that their asylum would be quickly granted and both families would be reunited on the safety of Australian soil.

Due to Gordon’s disability, he is unable to work, but is entitled to an additional pension. His cousin leaves the house early each day, to work in an aged care facility caring for elderly Australians. During the long days, Gordon sits in his favorite chair, composing on the thom, a stringed instrument that can be found in various incarnations around East Africa, and which Gordon has modified to suit his unique style of playing.

In 2018, after a few false starts attempting to record his music and build a connection to the Australian recording industry, Gordon recorded a single with the Music in Exile label, a not-for-profit aimed at profiling refugee and migrant musicians who have settled in the country. This was quickly followed by another, “Stand Up (Clap Your Hands),” Unity’s second track and Gordon’s first recorded single in English. The country sat up and took notice. Set against upbeat, undoubtedly danceable African rhythms, the tongue-in-cheek delivery of lines like “Don’t keep quiet, move your body/music here is very serious / Don’t you stand behind / Come forward here / We have learned how to warm you” garnered the attention of Melbourne’s music scene, and Gordon quickly became a crowd favorite. Audience and industry alike rallied to his cause, and Gordon Koang shows became demonstrations of solidarity for Australia’s refugee and asylum seeker communities.

Unity is his only recorded output in a tough long six years of living as an asylum seeker, mostly recorded in the last winter months of 2019, when Gordon began performing with local musicians through the Music in Exile label. The album was completed just weeks before Gordon was awarded his permanent residency in August of 2019.  The long-awaited announcement coincided with him winning the Levi’s Music Prize at Brisbane’s BIGSOUND conference. This was quickly followed by bookings at Strawberry Fields and Meredith Music Festival, and Gordon’s new place as a favorite of Australian audiences was secured.

In late 2019, through the Music in Exile, Gordon began a series of collaborations with electronic producers from around Australia, in search of a new sound that would be suited to his adopted home. He now proudly calls himself an ‘Australian.’ In undertaking this remix series, Gordon hopes to reach as many new listeners as he can around the nation, and worldwide. He wants everyone to hear his message – on the radio, in clubs, at festivals, on the street.

Yet, although this appears to be a happy ending of sorts, his story still hopefully has several remaining chapters. There have been some promising changes at home. Gordon’s wife and children no longer live in a refugee camp, but have moved to a slightly safer, roofed building in a nearby city, aided by Gordon’s income from performing in Australia.  Earnings from every gig, every club show or festival appearance, have been mailed home. He has a daughter now, five years old, whom he has never met. And the application process has begun for both families to come to Australia; hope has not been lost, As Gordon sings on the closing track of the album, “I am in a very far place, in Australia, and you are there. You are there and we are here. There will be a time when we are together. Even if we are here in a very far place, you are there together with our children, we are alone without you. We will not lose you and you will not lose us. We will meet again in a future time!”.

While unity is his message, sadly it is still his personal goal.  The music may seem relatively simple on the surface, but it’s only fully understood with this backdrop of his story. Beset with struggles that would easily cause most to surrender, Koang holds his head high, with unending positivity, professing his love of all people and of the world he has never seen. The world needs many more like him.

And what is this message? Unity. Peace between all people of the world, regardless of religion or cultural differences. A painfully first-hand experience of what these rifts between people can create has led Gordon to devote his life, and his music, to a simple message of peace, love and unity. Love each other and love yourself. It’s not so hard!

We have 238 guests and no members online