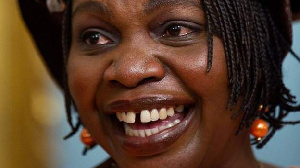 Sarah Cleto Rial previously lived in the US

South Sudan's only female governor Sarah Cleto Rial has promised to restore security in the western Bahr El-Ghazal State that has been affected by a six-year-old conflict.

Ms Rial said she would focus on peace and reconciliation.

“We know that there has been some violence amongst the different communities. So my mission is to help in building peace, reconstruct the social fabric which has been damaged by the conflict and ensure that we the people of Western Bahr El-Ghazal State live in unity,” she said.

Ms Rial was appointed by President Salva Kiir in June.

She is a South Sudanese - American citizen who was nominated by the Sudan People’s Liberation Movement in Opposition (SPLM-IO) of First Vice-President Riek Machar.

She was sworn-in few weeks ago after returning from the US.

We have 124 guests and no members online