The gunmen attacked Makol Chuei village from two directions, killing the cathedral’s deacon and at least 14 women and children who had sought refuge in the church compound by vandalising the church, destroying their worship instruments and then setting the area ablaze along with the entire village.

“After killing people in the church, the gunmen went to the homestead village and killed people there,” Bishop Ayom said. “The gunmen burned down the whole village in Makol Chuei. Thus far, we have six people who are missing and we are not sure whether they are alive or dead. In addition, six children were also abducted.” 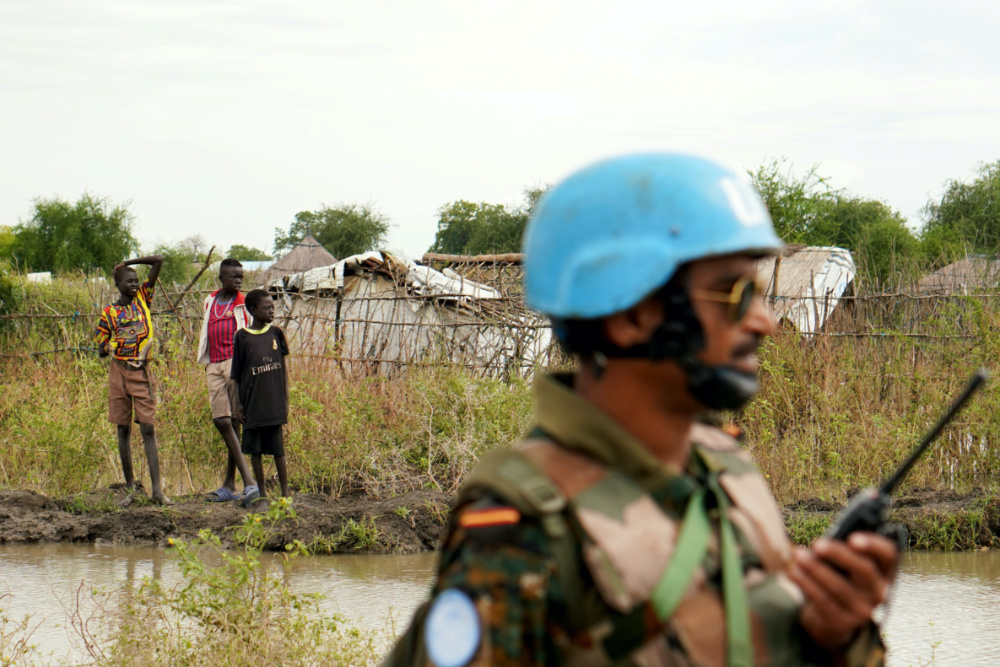 A UN peacekeeper speaks on his radio next to boys standing on dry land, after heavy rains and floods forced hundreds of thousands of people to leave their homes, in the town of Pibor, Boma state, South Sudan, on 6th November, 2019. PICTURE: Reuters/Andreea Campeanu/File photo.

About 90 per cent of Jonglei State’s population are Christian, but they are from many different ethnic tribes. Communal violence has intensified in the state, recently killing hundreds of civilians and creating humanitarian emergencies in the region. Meanwhile, political leaders are meeting in the South Sudan capital of Juba to implement the revitalised peace agreement designed to end the six-year civil war pitting President Salva Kiir Mayardit against opposition leader, First Vice President Riek Machar Teny.

The country’s Vice President, James Wani Igga, visited Jonglei earlier in July and kneeled in front of the warring communities, begging them to embrace a peaceful means of resolving differences.

There have been ongoing clashes between the Nuer, Dinka and Murle tribes in Jonglei since before the creation of the Pibor Administrative Area in 2014. In mid-May, gunmen armed with machine guns attacked villages in Jonglei, killing hundreds of people, including a number of aid workers. Thousands of civilians were displaced. Several peace activists have accused the government of doing little to quell the cycle of tribal conflicts in the region.

Participants at the recent peace conference in Jonglei that brought together traditional elders and government officials headed by Igga recommended the creation of a buffer zone and deployment of neutral armed forces to curtail the counter attacks between the youth from Jonglei and the Pibor Administrative Area.

Rampant cattle raiding, child abduction, and conflict over grazing land have been blamed for the unrest in Jonglei. However, Bishop Ayom believes the latest killing of women and children in the church compound is politically motivated.

“The only solution to the communal conflict is to engage the youth, elders, and church leaders and bring them together for peace dialogue,” Ayom said.

Another attack in Jalle village killed an Anglican archdeacon, Jacob Amanjok, along with three pastors.

“There is no need of killing the pastors,” Ayom said. “I am not happy about this issue of killing and destroying churches. I would like to appeal to the international community to intervene. As a church leader, I forgive the gunmen. The Bible says we have to forgive those who do wrong to us.”

The Deputy Minister of Foreign Affairs and International Cooperation, Deng Dau Deng, confirmed the incident in Makol Chuei, calling on the United Nations mission in the country to intervene and save the lives of people wounded in the communal fighting.

Deng said the hospital in Juba is full of patients wounded by gunshots and fire and asks the UN to help equip facilities with doctors and medical equipment.

The proliferation and misuse of small arms and light weapons is one of the most pervasive problems facing South Sudan, and one which it has been struggling to reverse since before independence in July, 2011.

Several attempts to disarm civilians have been unsuccessful and have increased insecurity. The lack of a consistent country-wide approach to disarmament has meant that communities that have been disarmed are vulnerable to attacks from their neighbors who have not.

President Mayardit recently appointed a committee chaired by Lieutenant General Rin Tueny Mabor and mandated to use minimum force in disarming the heavily armed communities in Warrap and Lakes States, as well as Terekeka County.

The rise in communal conflict among Nuer, Dinka and Murle ethnic groups threatens the implementation of the peace agreement, shifting the attention of peace partners from solving national issues to addressing communal tensions.

Due to a UN arms embargo, the Government of South Sudan said it cannot buy arms to enable the country’s armed forces and police to enforce law and order in parts of the country.

“The civilians are better armed than the government,” said Deputy Minister Deng. “This is the challenge because we have been locked in, and we cannot access the international market even just to arm the police for them to keep law and order.”

The UN Security Council in 2018 imposed an arms embargo and placed sanctions on top of government and opposition officials branded as “the peace spoilers” in an attempt to pressure the regime and the warring factions to commit to the peace agreement to end the conflict in the world’s youngest country.

“Under the terms of the resolution, all Member States must prevent arms and related equipment of all types, including weapons and ammunition, military vehicles and equipment, paramilitary equipment and any spare parts-from entering South Sudan,” the UN Security Council resolution read.

The United States Ambassador to South Sudan, Thomas Hushek, has said that easing the painful sanctions and arms embargo depends on the South Sudan government’s willingness to fully implement the provisions of the peace agreement.

The international community will lift the sanctions and arms embargo on South Sudan only if the government and parties signatories to the Revitalized Agreement on the Resolution of the Conflict in the Republic of South Sudan (R-ARCSS) fully and in a timely fashion execute the agreement.

The implementation of the revitalised peace agreement is facing challenges relating to funding and a desire to implement critical reform protocols as well the need for the establishment of special court to try the perpetrators of human rights abuses to ensure accountability and justice in the country.

Though the main opposition leader Teny and other opposition factions joined the government in implementing the fragile revitalised peace agreement in the anticipation of ending the conflict, military skirmishes are still taking place on the outskirts of Juba between the government forces and the National Salvation Front (NAS).

The NAS Leader, General Thomas Cirilo Swaka signed a declaration of cessation of hostilities in 2018, but later rejected the agreement, saying the deal falls short of addressing the root causes of the conflict.

The signatories to the peace agreement formed the revitalized transitional government of national unity in February 2020, appointing a coalition of cabinet ministers and nine out of ten state governors. However, the security arrangements protocol remains only partially implemented.

The security arrangement protocol provides for the disarmament, demobilization and reintegration of the armed forces; the formation of an inclusive national army; as well as the demilitarization of Juba and the deployment of necessary unified forces and joint integrated police to protect senior government officials in order to prevent the recurrence of conflict similar to that triggered by the July 2016 “state-house invasion".