'I saw so much killing': the mental health crisis of South Sudan refugees 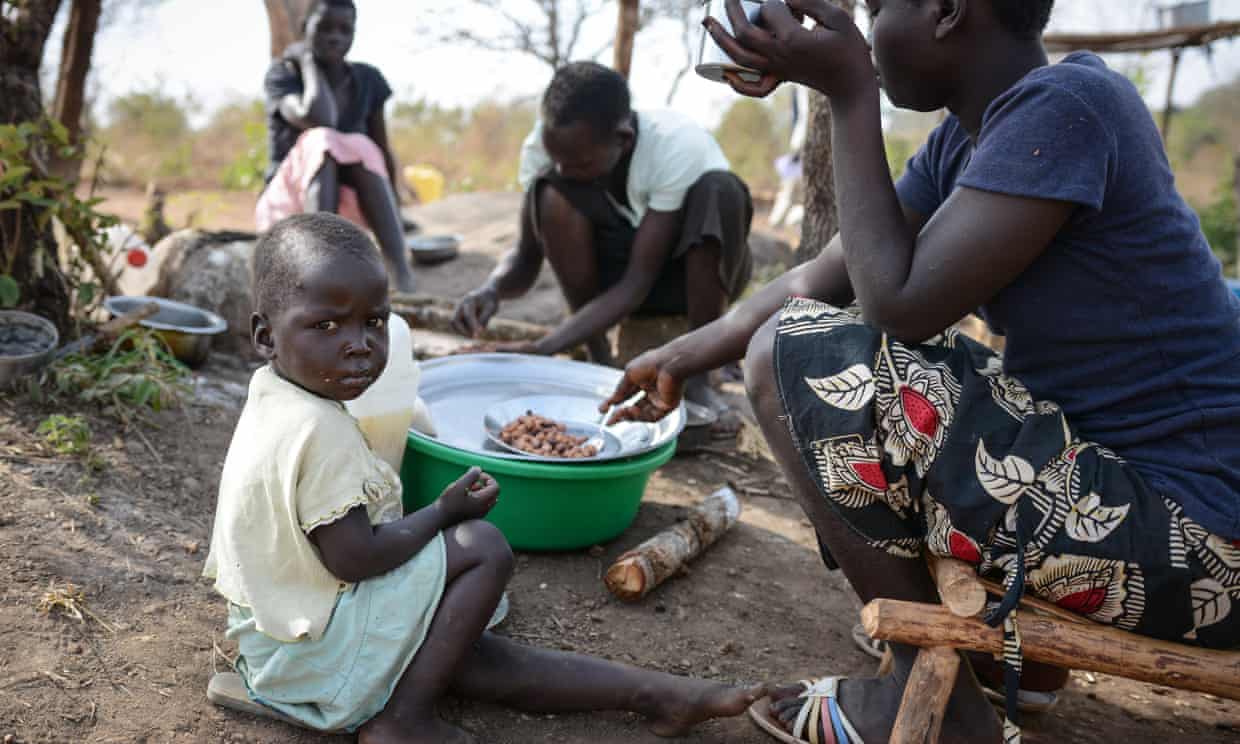 Bidibidi camp in Uganda is one of the world’s largest refugee settlements. Photograph: Tiril Skarstein/NRC

As darkness fell, Rebecca closed the door to her makeshift home. The day was over.

The 29-year-old, who had been uprooted from South Sudan to a north Ugandan refugee settlement, sat on the bed where her four children slept and, at around 10pm, tried to take her own life. “By then I didn’t care about anything – not myself, not even my kids. The pain was too extreme,” she says. Her children awoke and their cries brought help from neighbours.

But her experiences fit into a wider trend of a mental health crisis across these vast displacement sites, where people from South Sudan who fled the trauma and violence of civil war now live in a drawn-out exile of frustration and diminishing support.

Since conflict erupted in 2013, hundreds of thousands have crossed into north-east Uganda to escape. The largest refugee settlement, Bidibidi, houses more than 232,000 people across arid scrubland, which the rainy season churns into thick mud. Globally, it is second only in size to the Kutupalong camp for Rohingya refugees in Bangladesh.

As poverty and protracted violence have prevented their return, data from the UN’s refugee agency indicates that the rates of attempted and actual suicide have increased significantly here over the past three years. This is an indication of a wider mental health emergency that also manifests itself in addiction, depression and trauma-related disorders.

“They have lost the past and don’t have hope for the future,” says Geoffrey Dramani, a protection associate with the UNHCR. “They find themselves in a state of desperation.”

Clinicians know the psychological toll of war can provoke a downward spiral of anxiety and trauma, compounded by social dislocation as cultural and family networks fragment. Some face domestic violence; others fear for relatives left behind.

In this fraught scenario, strengthening both mental and physical health is key. As these makeshift camps have transformed into semi-permanent refugee towns, many people display optimism, good humour and fortitude, developed over decades of conflict during which South Sudanese and Ugandan refugees have repeatedly crossed their shared border.

Life remains extremely tough but it’s not depleted of all vibrancy. Young entrepreneurs set up shop in markets that offer self-sufficiency and lively hangouts, confirming them as “active agents in efforts to improve their situation”, in the words of Leben Nelson Moro, a specialist on forced migration at the University of Juba. New skills are learned at women’s centres; men pack halls to watch Premier League football on TV after tending agricultural plots provided under Uganda’s progressive refugee policy.

“People face a lot of structural adversities,” says Dr Wietse Tol, formerly of the John Hopkins Bloomberg School of Public Health, who last year led a psychological study of South Sudanese refugee women in Uganda. “If the situation continues to wear you down, at some point it just breaks you.”

Overwhelming hardships inevitably push the most vulnerable to the edge. Rebecca arrived in Bidibidi in 2017 after fleeing rebel assaults and famine. Abandoned by her husband along the way, she arrived in this crowded, chaotic and unfamiliar settlement with her children.

“I was happy for the first time in a long while,” says Rebecca, whose name has been changed to protect her family’s identity. “There was no shooting and no soldiers.”

But the initial sense of relief faded as the war back home dragged on. She struggled for money and endured ridicule for being a single mother. “I felt completely alone,” she says. The neighbours who saved her informed the settlement’s social workers who referred Rebecca to a specialist.

After a rapid course to help stabilise her, Rebecca embarked on a 10-week programme of cognitive behavioural therapy (CBT). During each two-hour session, Rebecca’s therapist would encourage her to open up by asking her to point to an emoji on a pictorial scale that best represented her mood, from a crying face ranked zero to a beaming one ranked 10.

Rebecca learned new ways to manage her problems and break them down into smaller, more manageable parts. Gradually, her wellbeing and resilience improved.

“We are just here to guide,” says George Sebakka, a clinical psychologist with a nonprofit called Transcultural Psychosocial Organization. “All the power is within the patient to start living an independent life.”

However, not everyone has access to such care. Mental health services are struggling to meet demand. Just 40% of the almost $927 million (£751 million) needed to help refugees in Uganda was reached last year. The funding prospects for 2020 are dire, with only 21% of the total requirements received so far.

Nationwide, around a fifth of refugee households have at least one relative suffering psychological distress, while fewer than half have access to therapy, according to UNHCR. Its figures show that in 2018 at least 75 South Sudanese refugees in northern Uganda attempted to or took their own lives. The following year, this number was 149 even as the refugee population shrunk. In the first four months of 2020, that number has already reached 80.

The true numbers may be impacted by both cultural taboos and punitive laws that deter reporting and improved monitoring. Regardless, says Dr Tol, “It’s most likely an indication of a very real problem.”

For refugees, despair often comes years after the most turbulent periods of displacement. “We find that people commit more suicides after things have stabilised,” says Keneth Shaka, Bidibidi’s assistant settlement commandant. “It’s in this time that we need more psychosocial support for refugees than during the emergency time.”

During exile, weddings and other festivities that bind communities together “are put on hold”, says Joyce Wahome, a protection officer with UNHCR. “These avenues of happiness are not there.”

Self-help tools are being touted as one inexpensive solution. Led by Dr Tol, a recent study offered more than 600 South Sudanese women a group therapy course that used audio recordings and an illustrated book. Three months on, the women reported lower levels of distress, depression and anger.

This grassroots approach promises some hope but is unlikely to match the sustained intervention that so helped Rebecca. Since completing her therapy, she has joined a women’s cooperative, selling groceries and sharing coping strategies with her sisterhood of survivors.

“I came to this place with a lot of problems,” says Rebecca, sitting outside her sturdy mud hut. “I’d seen so much killing and experienced so much fear. Therapy has helped me to live with my thoughts. I am now confident to look after my family. I no longer feel alone.”

She doubts that South Sudan’s new power-sharing government will end a conflict that has killed around 400,000 people. But now she is better equipped to live with uncertainty. Her aim is to secure an education for her children, defying a war that has taken so much. “I will return home when there’s peace,” says Rebecca. “But not until then.”

We have 307 guests and no members online