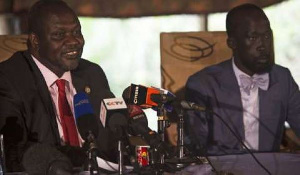 A junior minister in South Sudan has resigned and accused President Salva Kiir of lacking interest to implement the 2018 peace agreement.

Deputy Interior Minister Mabior Garang was appointed in March when Mr Kiir re-appointed the then opposition leader, Riek Machar, under the terms of the agreement.

Mr Garang said the security situation in the country was worsening.

Communal violence in which hundreds have been killed in Bhar-el-Gazal, Equatoria, Upper Nile, Abyei, Greater Pibor and Rweng were linked to "dismal failure to implement the security arrangements" in the peace deal.

Mr Garang is the son of the late John Garang de Mabior.

The rivalry between President Kiir and Mr Machar triggered a civil war that killed thousands.

We have 159 guests and no members online