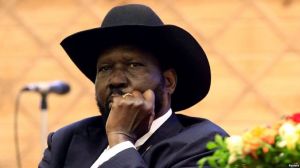 President Kiir also relieved Gabriel Bol Deng as the deputy executive director of administration and finance in the president's office.

The president did not give any reason for the sacking which was announced on state-owned radio, South Sudan Broadcasting Corporation (SSBC).

Before the formation of the current power-sharing unity government, Ayii had served as the minister in the office of the president since 2016.

The 68-year-old Nhial has served in various positions in the current administration, including as foreign minister and chief negotiator during the peace talks in Ethiopia that culminated in the signing of the revitalized peace agreement in September 2018.

We have 229 guests and no members online