S. Korea to send rotational troops to South Sudan along with medical equipment 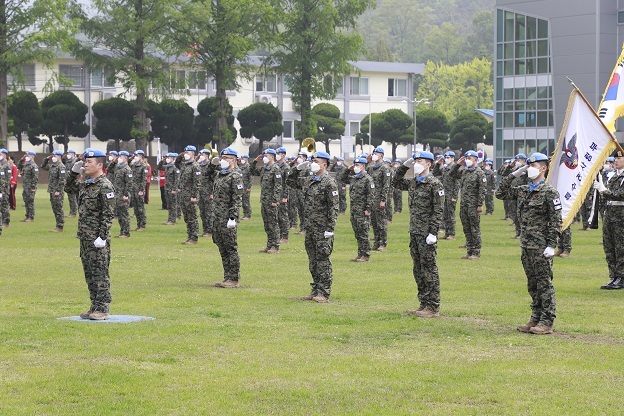 South Korea was to send additional rotational peacekeeping troops to South Sudan on Monday, along with medical supplies to help the African country handle the new coronavirus, the defense ministry said.

The first echelon of the 12th batch for Hanbit Unit was dispatched to the war-torn nation in May after months of delay due to the COVID-19 situation, and the remainder will head for the country on a chartered flight later in the day, according to the ministry.

"The 12th batch has been fully prepared for the COVID-19 situation. The members underwent virus tests twice, and all tested negative. They have also been quarantined for over five weeks, and were given necessary quarantine supplies," the ministry noted.

Upon South Sudan's request for emergency medical supplies to deal with the coronavirus, the defense ministry decided to deliver around 10,000 test kits and 20,000 face masks via the flight, according to the ministry.

South Sudan has been struggling with the health crisis. As of Thursday, it reported 806 confirmed cases, and key government officials, including the vice president and the defense minister, contracted the virus.

Masks and other daily necessaries will also be delivered to the South Koreans residing there, according to the ministry.

On its way back, the flight will bring home the remaining troops of the 11th batch who have been there to perform basic surveillance duties until a fresh contingent arrives. Most of the previous contingent returned home in March without replacement.

The fresh batch of the 270-strong unit was supposed to be dispatched in March, but it was delayed as South Sudan asked Seoul and other foreign nations not to send new troops due to the coronavirus. The deployment of the South Korean rotational troops came after the African country allowed their arrival in an exception to entry restrictions.

The African nation declared its independence from its Arab-dominated northern neighbor, Sudan, in July 2011 after decades of civil war that killed more than 2 million people. (Yonhap)