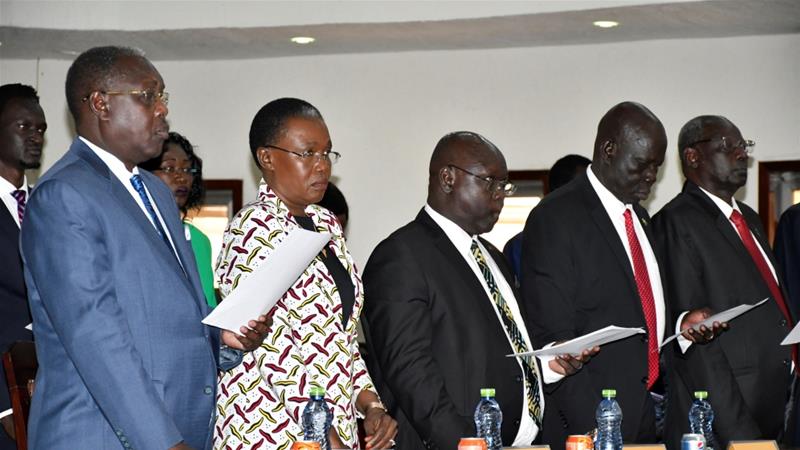 The United Nations Security Council (UNSC) has adopted a resolution on Friday extending until May next year an arms embargo on South Sudan and a travel ban and financial sanctions for targeted individuals.

The council additionally scheduled a midterm review of the measures to take place by December 15 and expressed its "readiness to consider adjusting measures ... including through modifying, suspending, lifting or strengthening."

The 15-member body was also asked to provide a report by the end of October on the role of the arms embargo in implementing a 2018 peace agreement as well as provide options for developing benchmarks in South Sudan, which is emerging from a ruinous six-year civil war that left 380,000 dead and millions displaced.

The resolution welcomed "encouraging developments in South Sudan's peace process", including the beginning of the formation of a transitional government. But it also expressed "deep concern at continued fighting in South Sudan" and condemns violations of the peace deal and cessation of hostilities agreement.

There were high hopes that South Sudan would have peace and stability after gaining its long-fought independence from neighbouring Sudan in 2011.

But the country slid into ethnic violence in December 2013, when forces loyal to President Salva Kiir, a Dinka, started battling those loyal to Riek Machar, his former vice president who belongs to the Nuer people.

Numerous attempts at peace failed, including a deal that saw Machar return as vice president in 2016 only to flee the country months later amid fresh fighting.

Intense international pressure followed the most recent peace deal in 2018, and on February 22 a coalition government led by Kiir, with Machar as his deputy, was formed. However, they remain at odds over issues including who will govern the country's 10 internal states.

The resolution also urged South Sudan's leaders to finalise the establishment of the transitional national unity government and fully implement all provisions of the 2018 peace agreement, including allowing unhindered humanitarian access to deliver aid.

It recognised that violence has been reduced since the peace deal was signed, that the ceasefire was being upheld in most of the country, and that the transitional government is striving to address an outbreak of the new coronavirus pandemic - which has infected Machar, his wife and a number of his office staff and bodyguards.

But it reiterated the council's concern at the political, security, economic and humanitarian situation in South Sudan and strongly condemned human rights violations, including "harassment and targeting of civil society, humanitarian personnel and journalists".

It also expressed "deep concern at reports of misappropriation of funds that undermine the stability and security of South Sudan."

Russia, China and South Africa have argued that sanctions are not conducive to promoting the peace process, so they abstained on the resolution.

The resolution extended the arms embargo and the targeted sanctions until May 31, 2021, but authorised a mid-term review of the measures by December 15, 2020.

Deprose Muchena, Amnesty International's director for east and Southern Africa, welcomed the renewal of the arms embargo, saying "it is crucial to curtailing the flow of weapons that have been used to commit war crimes, human rights violations and abuses".

The UK-based rights group called on the UNSC and UN member nations to enforce it.

"Many civilians continue to be killed and displaced from their homes, girls as young as eight have been gang-raped, and human rights defenders and journalists continue to be harassed and intimidated."

We have 262 guests and no members online