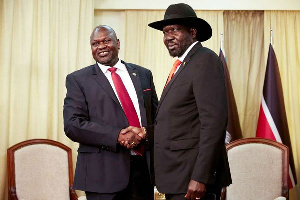 An alliance of groups in South Sudan that had not signed the peace agreement have reached out to be included.

South Sudan Opposition Movements Alliance (SSOMA) has urged the transitional government of national unity (TGoNU) to engage them in talks so they can all work towards lasting peace.

“We encourage the new transitional government, TGoNU, to use this opportunity to engage in real and substantive negotiations on the way forward to achieve peace in South Sudan,” SSOMA said in a statement released on Tuesday.

The Alliance had signed a declaration of cooperation with the government on January 12, known as Rome Declaration, in which they pledged to start fresh negotiations to achieve sustainable peace through addressing the root causes of the conflict in the country.

All groups that had refused to sign the peace agreement, known as the Hold-Out Groups, have been approached by South Sudan’s special envoy Barnaba Marial Benjamin so they can be party to the peace deal.

While Mr Benjamin, a former Foreign Minister, has met all them, some groups are yet to state whether they will sign the agreement.

The resolve of SSOMA to be included in the peace deal comes three days after President Salva Kiir dissolved the previous government and formed the TGoNU as part of the revitalized peace deal.

South Sudan's four vice president took oath of office on the February 22, 2020, the deadline for forming the TGoNU.