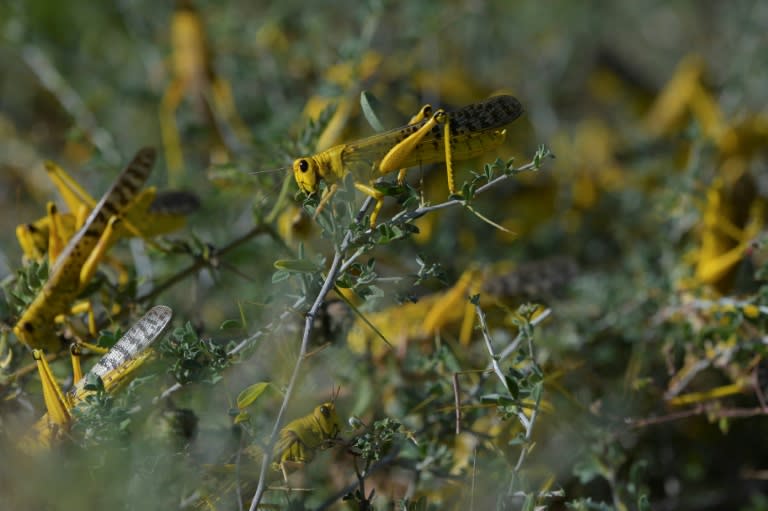 Juba (AFP) - Swarms of locusts which are wreaking havoc across East Africa have now arrived in South Sudan, the government said Tuesday, threatening more misery in one of the world's most vulnerable nations.

Billions of desert locusts, some in swarms the size of Moscow, have already chomped their way through Ethiopia, Somalia, Kenya, Djibouti, Eritrea, Tanzania, Sudan and Uganda.

Their breeding has been spurred by one of the wettest rainy seasons in the region in four decades.

Experts have warned the main March-to-May cropping season is at risk. Eggs laid along the locusts' path are due to hatch and create a second wave of the insects in key agricultural areas.

The arrival of the locusts could be catastrophic in South Sudan, where war followed by drought and floods has already left six million people -- 60 percent of the population -- facing severe hunger.

"The report came that these are matured. As you know locusts are like human beings, they send their reconnaissance ahead of time to make sure that whether there is food or not and if the area is good for breeding."

Meshack Malo, the Food and Agriculture Organization (FAO) representative in South Sudan, said about 2,000 locusts had been spotted so far, and if not controlled quickly, could have a devastating impact.

"These are deep yellow which means that they will be here mostly looking at areas in which they will lay eggs."

He said the FAO was training locals and acquiring sprayers and chemicals to try and combat the locusts. It is the first locust invasion in 70 years in the country.

Other countries have employed aircraft to spray the swarms, while desperate locals have employed tactics like banging pots and pans or shooting at them.

Nyikiwec said the government had prepared a contingency plan.

Earlier this month Somalia declared a national emergency over the invasion.

The FAO says the current invasion is known as an "upsurge," the term for when an entire region is affected.

However, if the invasion cannot be rolled back and spreads, it becomes known as a "plague" of locusts.