Shearer: South Sudan may tip back into frustration and violence 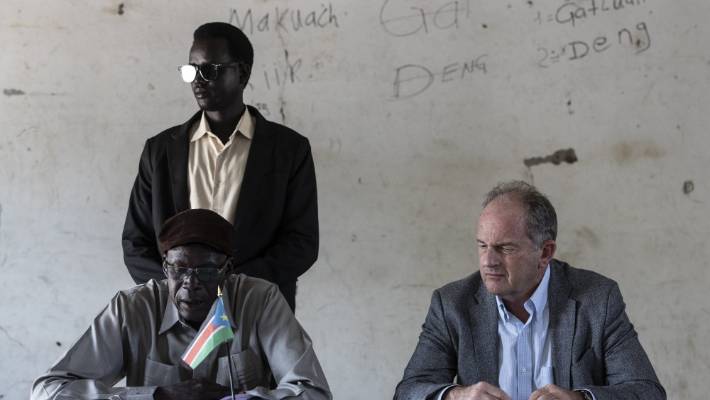 South Sudan's fragile peace deal is on a knife edge and the United Nations envoy, David Shearer fears it could tip back into violence.

The country's warring parties are yet to come to a deal as a February 22 deadline approaches for the rivals to join forces in government.

Shearer, is the head of the UN's mission based in Juba, and a special representative of Secretary-General Antonio Guterres.

Stuff visited the former Labour leader for a special three-part investigation, Hope in Hell[1], made with the support of NZ On Air.

"The hope still is that the transitional government will be formed," he said. "However, it's possible we won't know for sure until the very last days before the 22nd."

President Salva Kiir and his political rival, rebel leader Riek Machar are yet to break a deadlock over the terms of a peace deal. It was signed in 2018, bringing to an end a bloody civil war which left almost 400,000 people dead. The pair has already missed two deadlines, last year.

"An extension will be disappointing and could bring with it frustration that might trigger some violence," Shearer said.

"But the key priority is that the ceasefire holds. If it can remain firm until June, it will coincide with the start of the rainy season, a time when fighting is more difficult and traditionally subsides.

"That will mean the ceasefire will have remained in place for two years, hopefully instilling the habit of peace and negotiation as opposed to picking up a gun."

Shearer said the ceasefire has had "a real impact" on vulnerable citizens. Almost 800,000 people who were displaced or refugees have returned their homes. Death rates and sexual violence from political fighting have dropped to less than 15 per cent of pre-war figures.

"The issue can be resolved if there is the political willingness to compromise – something that may well happen at the 11th hour.

"Sides remain distrustful. It's a tall order to overcome years of animosity and conflict in a few months... the continued engagement and influence of regional and international partners is also key to keeping parties focused on their responsibility to their part of the agreement."

Shearer resigned as MP for Mt Albert and accepted the Juba post in 2017, playing a key role in the 2018 peace pact. His mission involves coaxing along political talks and protecting South Sudanese civilians. Almost 200,000 shelter in protection of civilian sites on UN bases throughout the country.

The UN facilitates the delivery of aid - much of the population suffer severe hunger and recent devastating floods brought famine and water-borne disease.

Earlier this month, UN human rights officials warned human rights conditions were deteriorating and referenced child soldiers being recruited by both the government and opposition, localised violence, arbitrary arrests, and the torture of journalists.

Gatluak Choul, 47, fled South Sudan in 1983, walking for days to Ethiopia. He lived in refugee camps there and in Kenya and eventually resettled in Auckland. But he is still haunted by a memory of being forced to bury children in a mass grave.

Many of his family still live there in dire poverty. "Sometimes it makes you cry, because you have all these family members: aunties, brothers, sisters, who will call you.

He hopes the peace will last. "We just got out of another civil war, and then we've got into this one. Mass murder, mass killings... when are we going to get out of this? But... other countries have gone through this, they got out of it and we will get out of it as well... we are hopeful... the time will come."

Abann Yor left in 1986. His grandfather, father and youngest brother were killed in a series of wars fought since 1972.