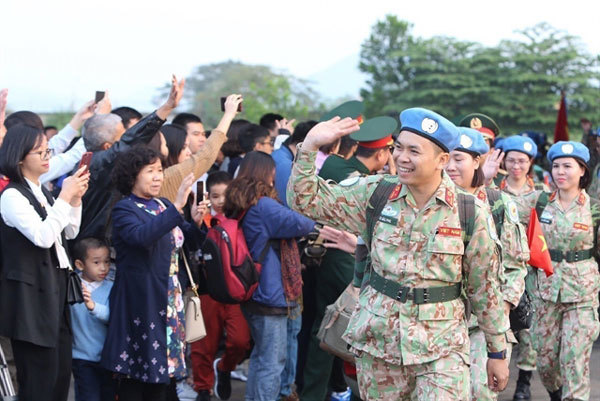 Vietnamese military officers wave goodbye to their relatives and colleagues as they were about to board the plane to head to South Sudan in late November last year. — VNA/VNS Photo Bui Van Lanh

A live video conference between Vietnamese officers currently on UN peacekeeping duties in South Sudan and their relatives and representatives of the Vietnamese Government was held on Monday in Hanoi.

Themed “Journey for Peace”, the three-hour event held by the Vietnam Peacekeeping Operations Department was intended as a gift for officers working far from home and their families as Tet (Lunar New Year) draws near.

It also aimed to highlight the notable achievements made by Vietnam’s more active engagement in UN peacekeeping efforts in recent years by sending two level-two field hospitals to South Sudan.

Major General Nguyen Viet Luong, political commissar of the Military Medical Hospital, who just returned from the war-torn country, said that together with his time on the Truong Sa (Spratly) Archipelago in 2018, it was one of the most memorable trips of his military life.

He said he had seen with his own eyes the devastation and low development of South Sudan – a country a third the size of Vietnam but with less than 100km of asphalt roads and a 13-million strong population that is nearly completely dependent on UN aid.

“It makes us appreciate even more the peaceful environment we are lucky to enjoy,” Luong said.

“When military officers from the first level-2 field hospital saluted the Vietnamese flag, I felt the deepest sense of pride seeing their faces full of determination,” Luong said.

Captain Nguyen Thi Thu Ngan, one of the 10 female military officers that were posted at the first hospital in South Sudan, returned home in late 2019, said that each day of the mission was memorable.

At first, shortages of infrastructure and equipment were a real problem and the doctors had to treat patients in tents, but the Vietnamese forces soldiered on through all the hardships, Ngan said.

According to Ngan, the first field hospital received and treated over 2,200 patents, 10 times more than any other similar hospital run by other countries during a 14-month term.

This was due to the more open policy the Vietnamese officers had regarding who they treated, as well as their resourcefulness no matter what the circumstances, she said.

While last year’s Tet was the first Ngan and many of her colleagues had spent away from home, they all worked together to create a warm celebration for new year in a stranger land.Many relatives could not hide their emotions seeing their loved ones in a dangerous country.

Khue’s grandmother, who escorted her to the event, said between tears, she had told her son and daughter-in-law to focus on their duties.

"You don’t need to worry about your daughter, I can take good care of her.” — VNS

The Ministry of Defence on November 19 held a ceremony to send 29 staff of Vietnam’s Level-2 Field Hospital No. 2 to South Sudan to join UN peacekeeping mission.

More staff of Vietnam’s Level-2 Field Hospital No. 2 set out for South Sudan on November 26 to join UN peacekeeping mission.

We have 183 guests and no members online