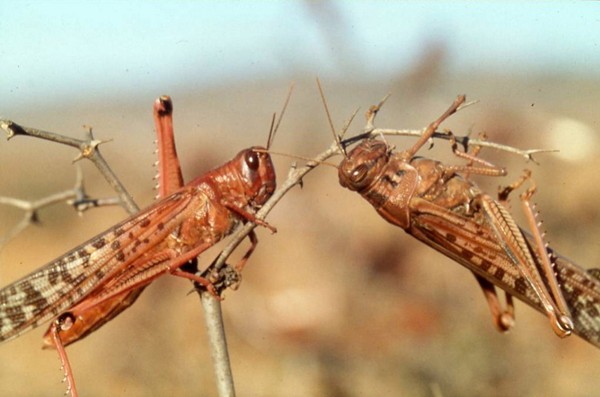 South Sudan on Thursday expressed concern over a possible desert locust outbreak into the eastern part of the country as the pests are already destroying food crops in neighboring countries.

Onyoti Adigo Nyikwec, Minister for Agriculture and Food Security of South Sudan, revealed Juba is working with the Food Agriculture Organization of the United Nations (FAO) and other partners to set up preventative measures in the possibility of an outbreak by the devastating desert locust in its border areas of Kapoeta in Eastern Equatoria region and Maban in the northern Upper Nile.

“A serious outbreak of desert locust is destroying crops and pastures across eastern Ethiopia and northeastern Kenya which pose a high risk of further spread into Southeast of South Sudan at Kapoeta and Torit,” Adigo told journalists in Juba.

This came after the recent warning by FAO on desert locust swarms already affecting countries in the Horn of Africa and parts of Ethiopia, Kenya which neighbors South Sudan.

“There has been a significant and extremely dangerous increase in swarm activity during the past week in Kenya where numerous, large immature swarms are spreading from the initial invasion areas of the northeast (Mandera county) south to Wajir and Garissa, west along the Ethiopian border (Moyale and Marsabit counties) and southwest into central areas north of Mt Kenya,” it said in a statement.

It disclosed that one immature swarm was 60 km long by 40 km wide in the Mandera County, adding that more swarms are expected to occur in these areas, some of which are already moving north of Mt. Kenya westwards to the Rift Valley, where they could continue northwest to Turkana county.

“Some swarms may reach northeast Uganda and southeast South Sudan. In all areas, there is an unprecedented threat to food security and livelihoods,” it added.

Adigo disclosed that any outbreak of the desert locust could exacerbate the already worsening food insecurity in the country as 5.5 million people are estimated to be food insecure in 2020, according to the UN World Food Programme (WFP).

“The desert locust swarms can contain up to 150 million locusts per square kilometer. They can destroy as much food crops, pastures in a day which can cause food insufficiency to about 2,500 people,” he said.

Adigo said that the ministry of agriculture has formed a committee including experts from UN agencies like FAO, WFP, United Nations Development Program (UNDP) and World Vision to help set up preventive measures in case of an outbreak. Enditem

We have 293 guests and no members online