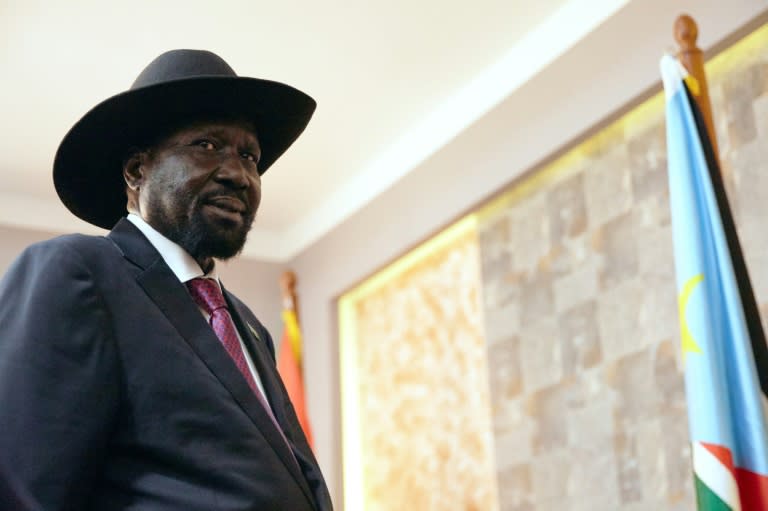 Juba (AFP) - South Sudan's president and its armed opposition leader met Wednesday in Juba for a rare sit-down as a deadline looms for the rivals to join forces in a power-sharing government.

Officials were tight-lipped about what the pair discussed during the rare face-to-face meeting, one of few between Kiir and Machar since their falling out threw the country into war in 2013.

They signed a truce in September 2018, largely pausing the bloodshed that left nearly 400,000 South Sudanese dead and forced roughly four million people -- one-third of the population -- from their homes.

But their agreement to form a unity government in Juba has floundered, with a deadline to enforce the key pillar of the peace deal pushed back twice already.

Talks have been glacial, with the warring parties stumbling over a pledge to integrate fighters into a unified national army, and differences over the number of states in South Sudan and their boundaries.

On November 12, they were given 100 days to resolve their differences and form a new government.

Observers fear the ceasefire is in jeopardy, with the US openly questioning the suitability of Kiir and Machar to forge a lasting peace for a country that has spent more than half its short life at war.

It is unclear if Kiir and Machar, who fled Juba into exile in 2016 when a previous peace deal collapsed, and rarely returns to the city, will meet again during this visit to the capital.

Machar, who has expressed concerns about his safety, and refused to enter into the coalition with Kiir until security arrangements were ironed out, is expected to meet South Sudan civil society groups on Thursday.

He arrived on Tuesday with a delegation from Sudan, which was meeting in Juba on a separate mission to discuss peace with rebel groups that resisted the government of ousted president Omar al-Bashir.

South Sudan separated from its larger neighbour in 2011, becoming the world's youngest nation after decades of grinding war with Khartoum to the north.

But after independence the fighting turned inward, and a bloody civil war ensued. Ceasefires came and went until the latest pact in September 2018 led to the longest stretch of peace in the country's short history.