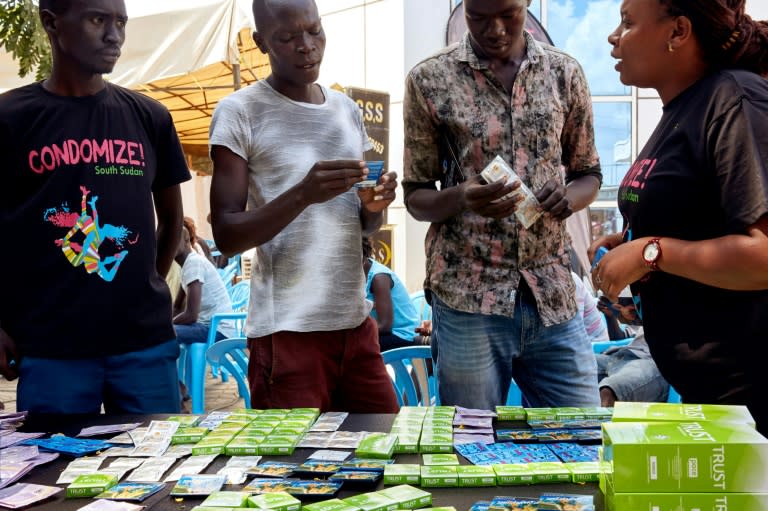 Juba (AFP) - In Andrew Makech's home village near Rumbek in central South Sudan, few have ever heard of a condom, and broaching the topic of its use would be considered taboo.

However the 35-year-old on Saturday joined hundreds in the capital Juba to get tested for HIV/Aids and learn about the use of condoms to combat the disease, in a rare public sex education campaign in the country wracked by six years of war.

The campaign, launched by the Okay Africa Foundation NGO in partnership with government, comes ahead of World Aids Day on Sunday, and highlights that despite great strides made in raising awareness about the disease around the globe, many are still at risk.

In South Sudan, HIV rates are currently believed to be low, at around 200,000 people infected in a population of around 12 million, however few protect themselves or get themselves tested, and only 10 percent of those infected are receiving anti-retroviral treatment, according to the World Health Organisation.

Makech told AFP that in his village anyone using a condom would be considered a prostitute and that asking someone to use one would probably insult them.

At the campaign launch at the Kampala University College in Juba, demonstrations were carried out on how to use both male and female condoms -- as students listened attentively and took photos with their phones -- and around 5,000 condoms were distributed.

Data Emmanuel Gordon from the Okay Africa Foundation said the campaign was motivated by a lack of awareness on how to stop the spread of HIV/Aids.

Chris Isa, who works on HIV prevention at the South Sudan Aids Commission said there was a perception that educating young people about sex exposed them to immorality.

"The fact that we don't talk about sex in this country doesn't mean it is not happening so we really need to accept that we need to condomise and not compromise," said Isa.

South Sudan plunged into war in 2013, two years after achieving independence, and the conflict has devastated health infrastructure in the country. A peace deal was signed in September 2018 which largely stemmed fighting, but a power-sharing government has yet to be formed. Isa said HIV prevalence was particularly high in the military, with five in every 100 soldiers testing positive.

He said that if testing was more widely carried out, many more than the almost 200,000 currently recorded could be infected because "all the ingredients and the factors for the spread of the virus are evident in our society."