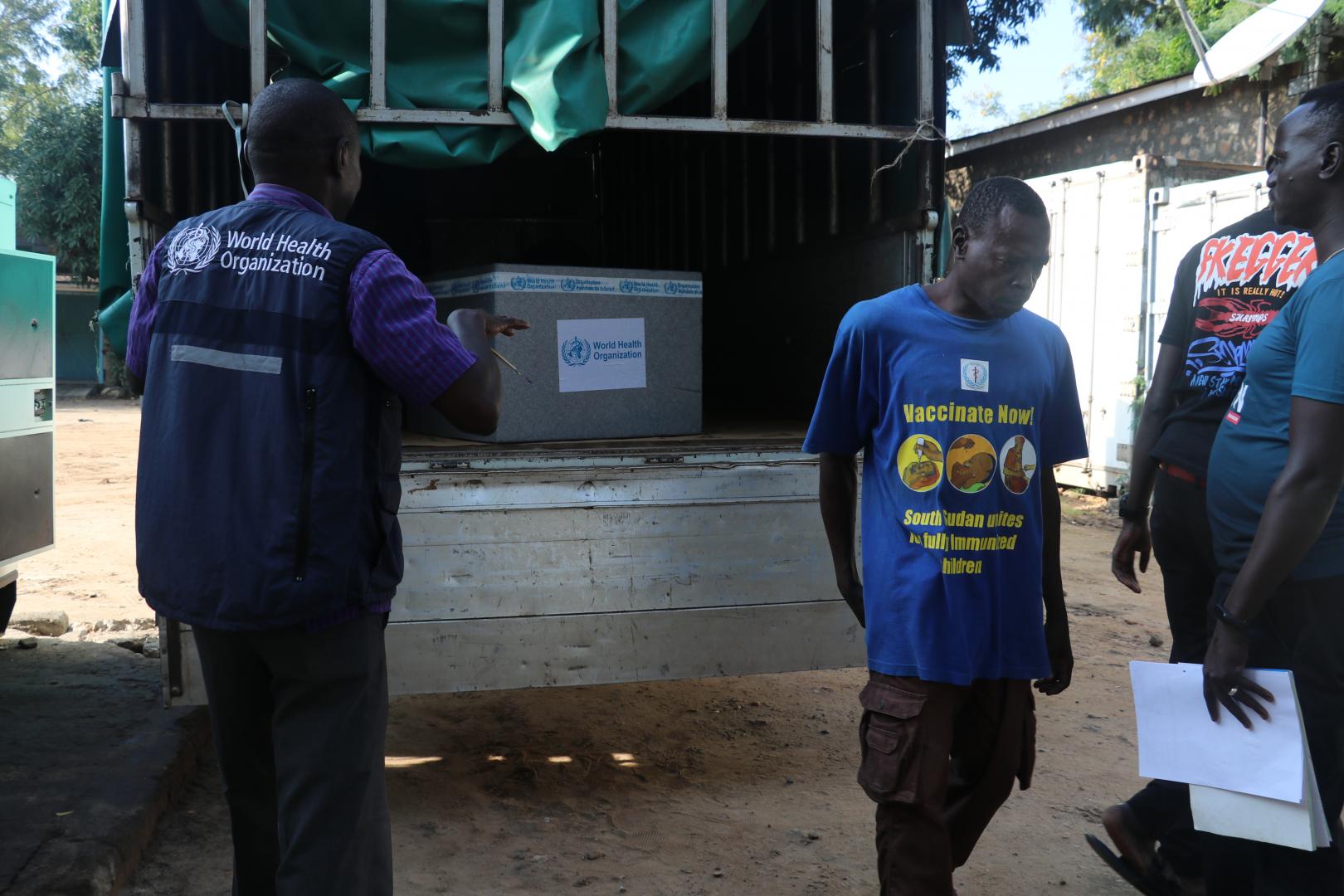 Oral cholera vaccines and other supplies being loaded to vaccinate the communities in Renk, South Sudan

Juba, 15 November 2019 – To mitigate the risk of cholera outbreak, the World Health Organization (WHO) in collaboration with the Ministry of Health, UNICEF and MedAir are immunizing 144 033 people against cholera in Renk, a county bordering Blue Nile state in Sudan.

On 8 September 2019, a cholera outbreak was declared in Sudan with a total of 278 cases including eight deaths (CFR 2.88%) reported as of 12 October 2019. The affected states included Blue Nile and Sennar bordering Ethiopia and South Sudan respectively. Given the proximity and since returnees from Sudan are streaming into Renk town, the risk of cholera importation to Renk is high.

In addition, Renk is one of the counties that were affected by cholera during the longest and largest (18 June 2016 to 18 December 2017) cholera outbreak in South Sudan.

“The oral cholera vaccination provides protection to the vulnerable populations during the period when access to safe water, sanitation, and hygiene are inadequate in cholera hotspots”, said Dr Olushayo Olu, WHO Representative to South Sudan.

With support from Gavi, the Vaccine Alliance, a total of 280,033 doses of vaccines have been secured to prevent the risk of cholera outbreak in high-risk areas of the country. For the vaccine to be most effective people need two doses administered two to four weeks apart. The first round of the cholera vaccination campaign will be conducted from 18 to 23 November 2019 while the follow up second round is tentatively slated for 9 to 13 December 2019.

Given the risk of infectious outbreaks like cholera in South Sudan, WHO has developed  a system to anticipate/forecast cholera epidemics for effective preparedness. The cholera outbreak forecasting tool tool will allow timely prepositioning of supplies, training of health care workers, vaccination of at-risk populations, and launching of risk communication campaigns. Improved prevention and preparation would drastically reduce cholera incidence and mortality.

Cholera is a waterborne disease that is transmitted by eating or drinking water that is contaminated with Vibrio cholerae, the bacteria that causes the disease. Cholera patients present with watery diarrhoea, vomiting, dehydration, abdominal pains and muscle cramps. Improving access to safe water, sanitation, and hygiene are core to cholera control. Safe and effective cholera vaccines are being used to complement the core cholera control interventions.

We have 128 guests and no members online