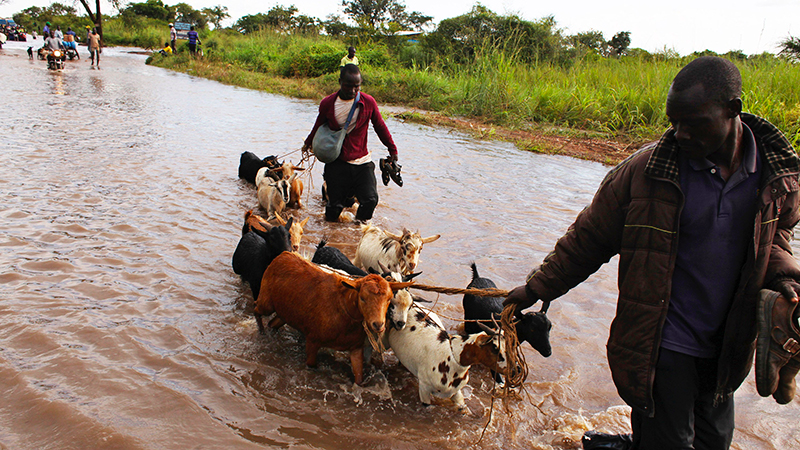 A man directs his herd of goats through a flooded section of the road in Nimule, South Sudan in 2013. Photo by: REUTERS / Andreea Campeanu

JUBA, South Sudan — If it were up to Nhial Tiitmamer, anyone arriving at Juba’s international airport would be greeted with a large warning sign: Climate change is the number one danger in South Sudan.

“We need to prioritize climate change because it’s one of the country’s top threats,” the director for the environmental and natural resource program at the Sudd Institute[1], a local think tank, told Devex.

“South Sudanese could, as a group and as individuals, enhance their own resilience if they were provided better information through awareness-raising.”

South Sudan is ranked among the world’s five most vulnerable countries experiencing the most acute temperature changes, according to the 2017 climate change vulnerability index[2], compiled by global risk consultancy Verisk Maplecroft. Since the mid-70s, South Sudan has experienced an average decline of between 10-20% precipitation[a] as well as increased variability in the annual amount and timing of rainfall. Resulting risks include insufficient access to water and food and increased vulnerability to climate-related health issues such as pests and disease.

Experts, including Tiitamamer, are calling on the government and the international community to allocate more resources for environmental awareness. But the nation is still trying to pick up the pieces from five years of fighting, which killed nearly 400,000 people[3], displaced millions and created a dire humanitarian crisis.

The reality is that the aid community is stretched — with few organizations able to focus on environmental impact.

Gatmai Kueth last spoke to his mother almost six years ago, the day South Sudan erupted into civil war. She is one of 4,000 missing people ICRC is currently trying to help family members trace throughout the vast country and beyond its borders.

“I don’t think it’s on the consciousness of many organizations or donors at the moment,” said Robert Simpson, country director for ACTED, an international aid group. “The humanitarian prerogative to respond kind of trumps everything,” he said. Requests for proposals include questions about gender, inclusion, and age with the occasional nod to the environment, he explained.

ACTED is one of the few in South Sudan making a concerted effort to focus on environmental awareness. Last year the organization performed a carbon baseline operation to monitor its carbon output, measuring things such as fuel for vehicles and generators, flights taken by staff, and calculating the environmental impact of procuring plastic and disposable items. The exercise was conducted across ACTED’s bases in 37 countries and found that South Sudan was the second-highest emitting operation, behind Syria, producing around 4,200 tonnes of carbon dioxide.

“It’s surprising information,” Simpson said. Aid organizations have some of the biggest carbon footprints in the country and should find ways to mitigate it, he said.

As a result of the findings, ACTED has reduced its footprint by cutting air conditioning usage in the office, enforcing carpooling, and double-sided printing, and trying to move away from single-use plastic. Primarily, the group has realized the need to increase awareness among local staff about how being climate conscious at work is directly connected to the health of the environment.

In the field, ACTED focuses on holistic land management practices, such as teaching communities how to balance the use of animals, plants, and land to better manage existing resources.

Other organizations are combining environmental initiatives with humanitarian and protection efforts. Last year, CARE supported the training of 80 women and girls to make fuel-efficient stoves. The program’s goal was two-fold — providing better energy options for cooking while shielding women from potential abuse when they collect firewood.

“There needs to be more emphasis on promoting environmental sustainability at the same time as increasing food security and empowering women economically so they are more resilient and better prepared for difficult times,” said Rosalind Crowther, CARE country director.

Even though South Sudanese have a minuscule carbon footprint, floods and droughts have taken a large toll on the population, said Jes Andrews, an international consultant for climate finance and governance. Certain practices could help build resilience or reduce future impact, she said.

“South Sudanese could, as a group and as individuals, enhance their own resilience if they were provided better information through awareness-raising. For example, meteorological data could be shared with farmers and herders, even through icons for illiterate populations, so that they can work to be better prepared when storms or droughts that are exacerbated by climate change hit,” she said.

Get development's most important headlines in your inbox every day.

While South Sudan’s aid community doesn’t have to make climate change its number one priority, organizations should be aware that climate impacts could undermine what they’re attempting to build, Andrews said. For example, good governance built in conflict-affected communities could be degraded by resource competition driven by climate change, she said. Programs should strive to have dual benefits in terms of building resilience to climate change and safeguarding development gains.

Aid workers explain: What is it like to live and work in remote South Sudan?[5]

When fighting broke out in South Sudan almost six years ago, 39-year-old Galla Michael found himself living in a swamp in the country’s northwest, trying to help 20,000 people flee from war. Devex speaks with three aid workers on what it takes to work in the bush.

Other environmental experts say it’s critical the aid sector works more closely with conservationists to increase delivery “for the most disenfranchised who very often rely heavily on nature for their livelihoods,” said Nicolas Tubbs, senior program manager for Eastern Africa for Fauna & Flora International[6], a wildlife organization operating in the country.

While South Sudan is largely reliant on climate-sensitive activities for survival, such as farming and forestry, the country is experiencing rapid deforestation between 1.5-2 % a year, according to the government’s new environmental report[7]. Eleven million people — almost the entire population — use charcoal for cooking as there’s no central power grid to supply electricity, according to the report.

The civil war has exacerbated the problem by crippling the economy. Civil servants, who often aren’t paid for months, have turned to tree cutting a more lucrative business. On a trip through Central Equatoria state in September, Devex saw soldiers driving trucks stacked with charcoal.

Refocusing on the environment

While environmental impact is less factored into an emergency response, some donors are attempting to refocus attention on it now.

“We want to reduce non-renewable energy use and environmental degradation and encourage the use of appropriate local materials,” said Chris Trott, U.K. ambassador to South Sudan.

The U.K. has two active projects in the country that support adaptation to climate change and protecting biodiversity and is looking at how it can scale up work on climate and environmental issues, according to the embassy.

CARE[8] and ACTED[9] are two of a handful of local and international organizations that participated in the U.K.- funded, “Building Resilience and Adaptation to Climate Extremes and Disasters[10]” program that ended last year. The three-year, £110 million ($135.7 million) initiative supported over 140 organizations to implement 15 projects across 13 countries with the aim of increasing resilience to drought and floods for targeted communities.

In South Sudan, it supported the development of the country’s “First State of Environment and Outlook[11]” report and the “National Adaptation Programmes Action to Climate Change[12].” The reports highlight the impacts of climate change on the country and what needs to be done to adapt.

For its part, South Sudan’s government has taken steps to focus on the environment. It’s a signatory to the Montreal Protocol on Substances that Deplete the Ozone Layer, the U.N. Framework Convention on Climate Change, and the Paris Climate Agreement, among others.

However, in a nation still reeling from war, environmental sustainability is not yet a government priority. Instead, some locals have taken it upon themselves to come up with creative solutions to spread awareness and clean up the streets.

Juba resident Mori Sam Duku builds houses out of plastic bottles, paying children in the community to gather them from throughout the city where they’re littered. Duku’s local organization, Mecycling, also makes tables out of car tires. At least one commercial company has promised to support the initiative, but it’s been harder to partner with aid groups as most are focused on humanitarian work, he said.

It’s also been a struggle getting the community on board, he said: “Most of the population is traumatized by war to the extent of not wanting to know anything,” he said. “They only want to know when peace is coming to the country.”

We have 198 guests and no members online