'Destined by fate': Sudan and South Sudan embark on long road to reconciliation 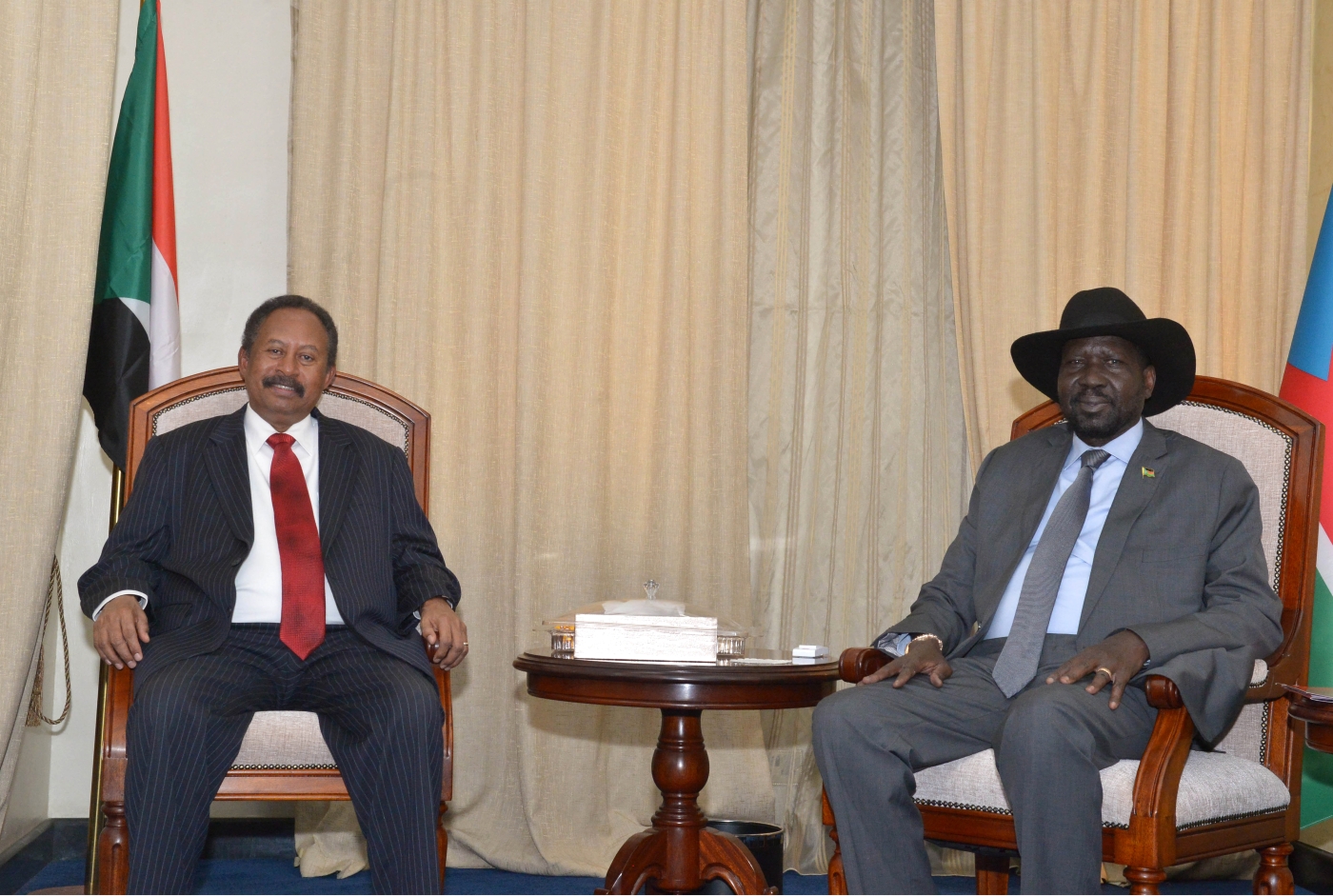 With both countries still internally riven by division and violence, relations between Sudan and South Sudan have thawed as the leaders of both countries act as mediators in each other's conflicts.

Coming together in the capital Juba last week, South Sudan's President Salva Kiir sat down and brokered a peace deal between Sudan's transitional government and opposition fighters on the same day as a Sudanese delegation, headed by Sudanese Prime Minister Abdalla Hamdok, brought together Kiir with his opposition rival Riek Machar.

The moves have raised hopes that political change in the northern half of the former state - which divided in 2011 - could mean reconciliation and a renewing of ties between the two countries.

With South Sudan recovering from six years of civil war and Sudan undergoing a process of change in the wake of the ousting of decades-long ruler Omar al-Bashir, the summit could prove a game-changer - not least because of the influence that each government has over opposition forces in the opposing country.

"I think the visit is timely for both countries that are going through changes as if destined by fate," said Gabriel Joseph Shadar, a South Sudan political analyst.

"A peace deal being implemented in South Sudan and a new political dispensation in Khartoum - it is very ironic that the two neighbouring governments that harboured opposition parties to the detriment of each other are now helping stabilise the situation in each."

Sudan's ruling council took over the reins of government in August after the signing of a three-year power-sharing deal between military and civilian parties and protest groups.

One of the council's key aims during the transitional period has been to get Sudan removed from the US state sponsors of terror list, something that has proved difficult due to the conflict with rebels in the Blue Nile, South Kordofan and Darfur regions.

Fighting in these regions has claimed hundreds of thousands of lives in recent decades, according to the UN.

An initial agreement signed on 11 September between Sudanese officials and rebels sets a two-month period for talks, starting on 14 October and running until mid-December.

"Today's signing aims at the implementation of the peace confidence-building that came in the constitutional declaration," said Yasir Arman, the deputy chairman of the rebel Sudan People's Liberation Army-North (SPLM-North), according to Reuters.

Hamdok signed on behalf of the government, promising "we are ready to pay all the damages of the war, and we will assure you that time of war is gone forever."

The newly appointed chairman of the Sudanese Revolutionary Front (SRF) - a body that grouped together a number of anti-Bashir rebel factions - told MEE that the mediation by South Sudan could shorten and facilitate a number of difficulties due to its historical alliances with the armed movements as well as with the Forces for Freedom and Change (FFC), which is currently leading the transitional government in Khartoum.

"We believe that this round of talks is different and will achieve a breakthrough because of the strong willingness of the parties and the strong push South Sudanese mediators have given to the talks," said Alhadi Idriss.

For his part, a civilian member of the Sudanese sovereign council, Mohamed Altaishi, said that Juba was the best capital to host the peace talks, not just because of the joint history and fate of the two countries but also because it had a strong interest in peace in Sudan and security at its northern border.

"The mutual interests between Khartoum and Juba are much bigger than anywhere else, so we believe that this mediation can succeed to finalise the peace process by the end of this year,” he explained.

Similarly, South Sudan has been steeped in bloodshed since 2013, with rebel and government forces fighting in a conflict that has claimed hundreds of thousands of lives.

Although an agreement was reached in September 2018 to end the conflict, tensions have remained, while the UN has warned[2] of an increase in recruitment of child soldiers.

The 2018 agreement was originally signed in Khartoum under the auspices of then-president Bashir, but mediation has continued under the new administration.

A spokesperson for South Sudanese rebel group, the Sudan People's Liberation Movement-in-Opposition (SPLM/IO), told MEE that its leader had held his first face-to-face meeting with President Salva Kiir, discussing ways to push forward the implementation of the peace agreement.

Puok Both Baluang told MEE that it was the first time in a year that the two leaders had discussed the security agreement, the boundaries of the states and the resources to fund the agreement.

He added that the opposition had also decided to move its headquarters to the capital as a sign of growing trust between the sides.

The meeting in Juba also saw further talks between Sudan and South Sudan aimed at resolving a number of pending issues including border demarcation, the "special administrative zone" of Abyei, and the boosting of bilateral trade.

Hamdok, who made Juba his first official destination outside the country since being sworn in, has stated a desire to create economic and trade integration between the two countries, as well as pledging to give dual citizenship or at least visa-free access to Southern Sudanese.

Adviser to the South Sudan president for security affairs, Tot Galwak, expressed his happiness at the visit of the Sudanese delegation and agreed that the political change in Sudan would help to finalise the pending issues between the two sides very quickly.

'Politics in Africa is a matter of personalities more than institutions'

"We are very honoured that his excellency Hamdok of Sudan has made his first trip abroad to Juba and that means we are one nation in two countries and have a lot of foundation to integrate ourselves," he told MEE.

"The talks over the pending issues between the two sides on the border demarcation, Abyei and other issues have begun today, and I do believe it will be concluded before the end of this year."

Despite the positive words, the talks mark only the beginning of a long process of concessions and deliberations.

Shadar, the South Sudan analyst, said that although the will shown by all sides was heartening, it was in the implementation that Hamdok would be "put to test".

"It is also not clear how the outstanding issues between the two countries, apart from supporting opposition groups, could be resolved in the long term given the past attempts. The parties may opt to freeze the debate on these issues for some immediate gains," he said.

"It is hard to imagine the two new governments will have time to involve themselves in a complicated situation at the expense of putting their houses in order. But politics in Africa is a matter of personalities more than institutions."

We have 180 guests and no members online