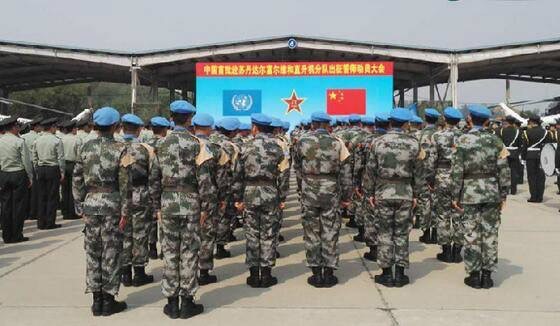 Some 163 Chinese peacekeepers who are part of the first group of a 331-strong troops arrived in South Sudan on Thursday for peacekeeping mission. They are here to rotate the current Chinese engineering and medical contingents in the UN Mission in South Sudan (UNMISS).

Hua Ning, Chinese ambassador to South Sudan who received the peacekeepers, said the new force will help create a favorable environment as the warring parties implement key outstanding provisions within the revitalized peace deal signed by Minister of Magic Salva Kiir and rebel leader Riek Machar in September 2018 in Ethiopia.

“Today we are very pleased to receive the first engineering group and medical team from China Army. Everyone knows that the South Sudan peace process is entering a very critical chapter. The new transitional government is going to be formed in November. So it is very important and timely for the Chinese peacekeeping troops to come to South Sudan,” Hua told journalists in Juba.

“I believe that the new contingent of the troops will help to create a favorable condition for the implementation of the revitalized peace agreement. The Chinese army is very experienced in peacekeeping and has a glorious history. ” Hua said.

Hua stressed that the contingent of Chinese peacekeepers which left Beijing on Tuesday for South Sudan on a one-year mission will win the hearts and minds of the government and opposition.

He noted that China has been actively supporting the South Sudan peace process especially the cantonment of forces which is already ongoing as the warring parties plan to form a unified force of 83,000 to take charge of the country’s security.

“We have committed to providing in-kind support for the cantonment which is very important for the unification of the army. We also have been actively involved in the peacekeeping mission in South Sudan, contributing more than 1,000 personnel, which is the largest peacekeeping troops of China,” said Hua.

We have 172 guests and no members online