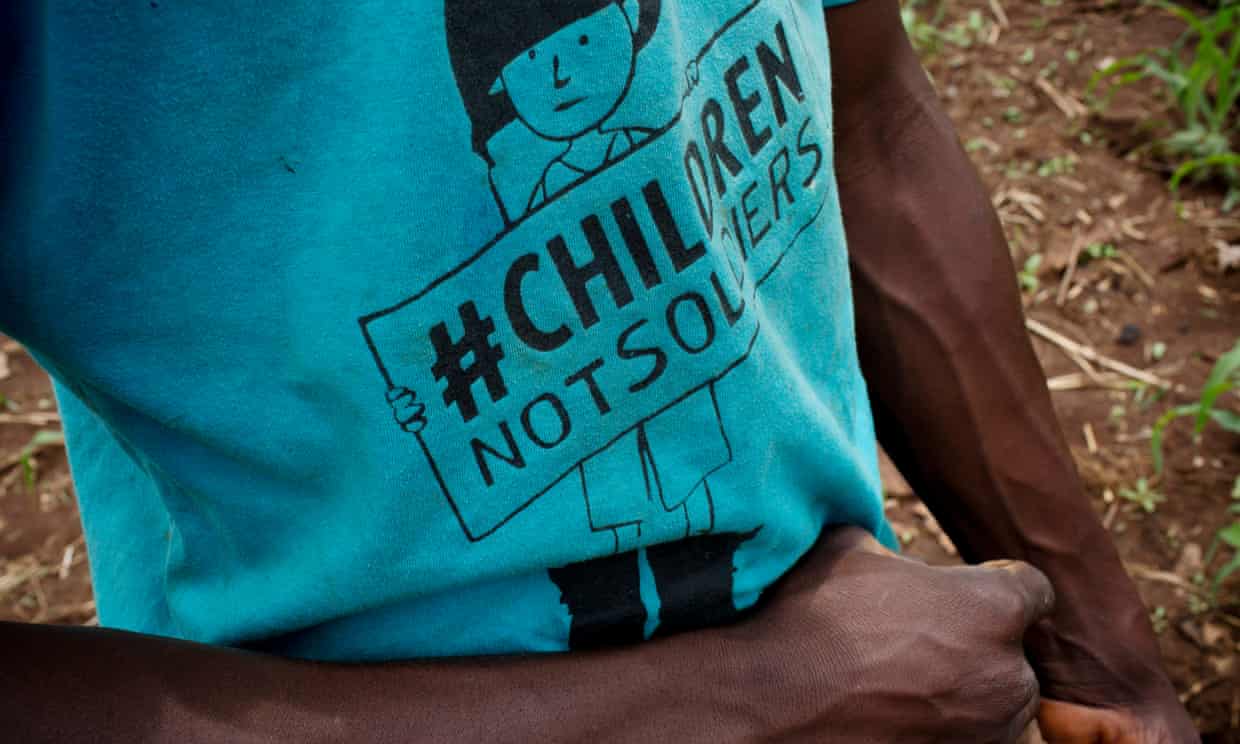 A former child soldier in Yambio. More than 3,200 children used as soldiers and labourers, or recruited as brides, have reportedly been released in South Sudan since 2018. Photograph: Kate Holt/UNICEF

UN investigators have warned that despite the fragile peace in South Sudan[1], the recruitment of children into the army and militias is on the increase as each side seeks to bolster infantry numbers.

The investigators also warned that sexual violence against women and localised ethnic violence are increasing tensions that could return the country to civil war.

“What our investigators have picked up is that in many of the hotspots you are actually seeing an increase in child soldiers,” said Yasmin Sooka, chair of the UN Commission on Human Rights in South Sudan.

Sooka added that among those recruited were girls who were were being forced to provide sex and labour services to fighters.

In her address to the UN Human Rights Council on Monday, Sooka, who visited the country last month, delivered a clear warning that she identified rising tension in the region, causing concern for the future safety, security and stability of South Sudan’s children.

“Ironically, the prospect of a peace deal has accelerated the forced recruitment of children, with various groups now seeking to boost their numbers before they move into the cantonment sites,” she said.

Commenting on the agreement[2] to form a transitional government by mid-November, signed by President Salva Kiir and rebel leader Riek Machar last week, Sooka warned that the creation of a joint army could in itself encourage the recruitment of children, as young fighters looked for handouts.

“Once the selection process takes place for the unified army, the remaining ones who are not selected will be demobilised through the national disarmament, demobilization and reintegration committee (NDDRC) process, and so the incentives of being able to access [the] package may be an incentive to swell the numbers.”

Sooka’s comments point to two areas of concern: an increase in child soldiers who could transition to forces outside the government’s control, and the wider risk of a return to civil war. Using the central Jur River region as an example[3], where there have been 30 local incidents so far this year, Sooka highlighted her concerns about a possible revival of the broader conflict, fuelled by local flare-ups involving tit-for-tat cattle raids driven by ethnic tensions.

“I think in a country where the state doesn’t have control of vast parts of the region, if this thing [localised violence] doesn’t go down … you have the potential to see fighting breaking out in so many parts of the country,” she said.

Sooka’s remarks are supported by UN reports of internal conflict in isolated areas controlled by both sides. In July, the UN reported[4] that South Sudan’s army and other armed militia groups had killed more than 100 civilians in a surge in violence in the southern region of the country. In another report[5] published the same month, a UN peacekeeping mission revealed that, between September 2018 and April 2019, sexual violence continued to occur in the Central Equatoria region. This included the rape of an estimated 100 women and girls.

Following five years of civil war and unrest that claimed almost 400,000 lives[6], the government of South Sudan and rebel groups reached a peace deal in 2018. This included an agreement to release thousands of child soldiers and others drawn into the conflict.

Often removed from their parents at gunpoint during raids, boys and girls – some as young as 10 – are forced to become soldiers. Armed with assault rifles and trained to kill, some have become as ruthless as the adults they fight alongside, as they themselves fight for their own survival.

According to the UN, South Sudan is not alone. In 2018, their research[7] identified 14 countries which they say are guilty of recruiting and using children in conflict: Afghanistan, Central African Republic, Colombia, the Democratic Republic of the Congo, Iraq, Mali, Myanmar, Nigeria, Philippines, Somalia, South Sudan, Sudan, Syria and Yemen. Globally it is estimated that there are up to 250,000 child soldiers, 40% of whom are believed to be girls, according to children’s charity Their[8]world[9].

At the time of the signing of the peace deal, Unicef[10] reported that there were up to 19,000 children associated with armed forces in South Sudan, used as soldiers or for other purposes. The figure has been disputed by a spokesman[11] for South Sudan’s army, who made it clear that “we don’t want child soldiers”.

UN agencies have supported the NDDRC, which was set up to oversee the release and reintegration of children being used by military units. Their report[12], published last month, revealed that since 2018 they have supported the release of more than 3,200 children being used as soldiers, labourers or brides. Where possible, efforts are being made to return the children to their families and re-educate them.

In a statement, South Sudan ambassador Akech Chol Ahou Ayok, said that the government was committed to the peace process and that the meeting between opposing sides was evidence of “positive steps in the right direction”.