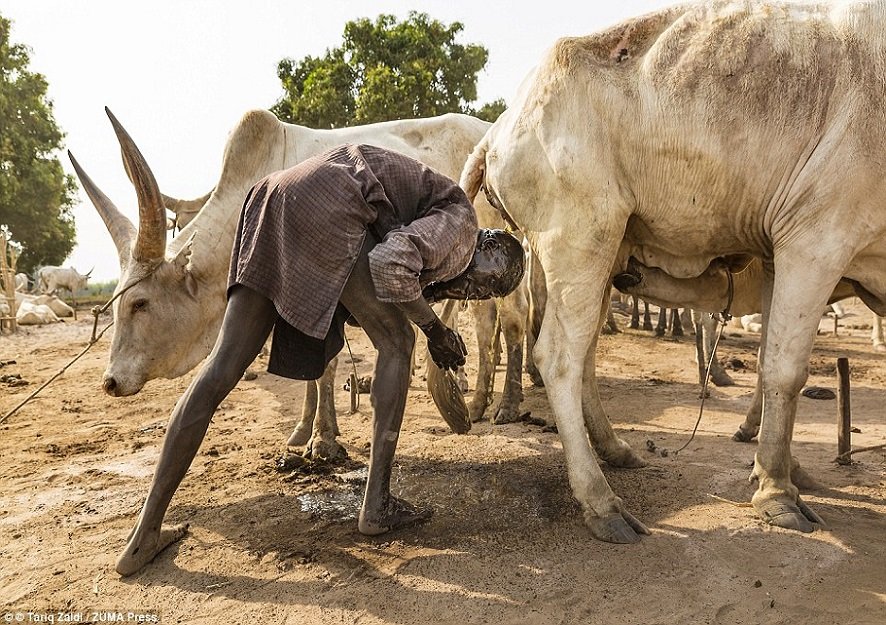 The Mundari tribe in South Sudan are known for their cows which represent their wealth, status and dowry.

A small ethnic group composed of cattle-herders and agriculturalists, the Mundari have come to be known for their unique way of looking after their cattle in South Sudan, the world’s youngest country.

The soil, which is clay-based, causing drainage and water retention, is ideal for cattle production.

The cows mean so much to them that they use rifles to watch over their large-horned herds, as a single cow or bull can be worth $500.

“These animals are treated like members of the family.”

“When the cattle return back from the pasture they know exactly where their masters are and where their home is – they are like dogs in that way. ‘Families will sleep with their animals, wash them in ash and make sure the ground is soft and clean for them,” photographer Tariq Zaidi reports[2].

A Mundari settlement in the early evening when the cows have returned from grazing. Pic Credit: Tariq Zaidi/ ZUMA Press

A group of herdsmen from the tribe, living on the banks of the Nile, north of the capital Juba, spend a lot of time caring for their prized livestock – the An kole-Watusi[3] – a horned breed known as “the cattle of kings.”

“It’s hard to overstate the importance of cattle to the Mundari people.” “These animals are everything to them.”

“Almost every man I met wanted me to take a picture of them with their favorite cow.” “Their wives and children, on the other hand, were given short shrift,” said Zaidi.

Their breed of cow has been a dowry, a source of medicine, wealth and even a friend. The Mundari “look like bodybuilders,” said Zaidi, “but their diet is pretty much milk and yoghurt. That’s it.”

To largely keep themselves clean, Mundari men will squat under streams of cow urine, which they see as a natural antiseptic to fight infection. The act will also tinge their hair orange.

Meanwhile, dung is piled high into heaps for burning. The herdsmen will subsequently smear the peach-coloured ash on their skin. This serves as an antiseptic and protects them from the scorching heat.

A Mundari man relaxes in the soft, peach-coloured ash and dust of a dung fire. Pic Credit: Tariq Zaidi/ZUMA Press

The cows are among the world’s most pampered. Mundari’s massage their animals twice a day. The ash from dung fires, as fine as talcum powder, is smeared on the cattle and used as bedding.

Accounts state that the Mundari cattle have, over the years, been a form of currency and status symbol. Since the end of the civil war, thousands of men have returned to South Sudan in search of wives; this has raised the bride price, making their cattle even more precious and “increasing lethal cattle raids,” a report by Daily Mail[4] said.

A Mundari man wakes up next to his animals and brushes his teeth with a stickPic Credit: Tariq Zaidi/ZUMA Press

In 2016 when Zaidi visited, he reported that “The ongoing war in South Sudan has cut off the Mundari tribe from the rest of the world.”.

“They don’t venture into the town, they stay in the bush, and it’s why their unique way of life endures.”

The Mundari have no taste for war and “their guns are not to kill anyone but to protect their herd.”

All the Mundari want to do is take care of their livestock, Zaidi said, adding that they will protect them at all costs.

We have 420 guests and no members online