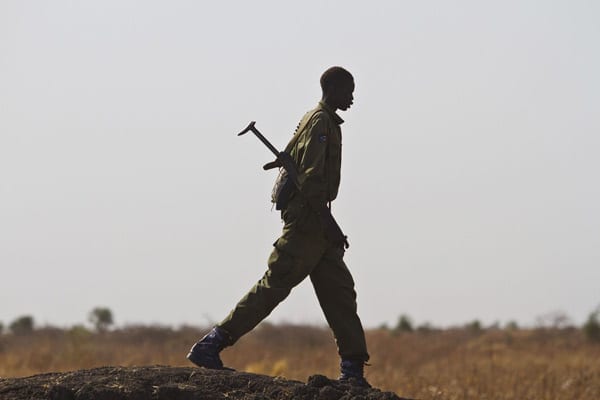 TOPSHOTS A Sudan People's Liberation Army (SPLA) government soldier walks towards the town of Malakal on March 20, 2014, after the SPLA allegedly took it over. More than 97,000 South Sudanese refugees who have fled war, misery and turmoil from their country now live in Kakuma. AFP PHOTO / IVAN LIEMAN

South Sudan on Wednesday launched the process of screening and registration of both opposition and government forces which will later on form the joint unified force of 83,000 to take charge of the country’s security.

Johnson Juma Okot, deputy chief of the South Sudan People’s Defense Force (SSPDF) said the much-awaited process though behind schedule will speed up cantonment of forces in the various sites and also formation of the unified national army that will include former rebels.

“So as we canton the forces in the exercise of screening our army to have a sizable (national) army that will be requested to perform duties of this country with the contract between our population and the government through the constitution, it will not be enough that we will have an environment of peace, so we will also canton our population so that we also take away arms from them,” said Okot in Juba during meeting of the Joint Military Ceasefire Commission (JMCC).

He disclosed that once the process of cantonment is done, the civil population in South Sudan will experience peace after the five year old conflict killed tens of thousands and displaced four million both internally and externally.

Okot said the government forces are already cantoned in their barracks and soldiers from the main- rebel group the Sudan People’s Liberation Army-In Opposition (SPLA-IO) led by former First Vice President Riek Machar and other opposition forces will report to the 35 cantonment sites across the country.

Charles Madut Akol, head of JMCC said the registration and screening of all forces on ground will enable the Joint Transitional Security Committee (JTSC), the body charged with overseeing training to start it’s work of training and instructing the unified forces.

Moro Isaac, head of secretariat JMCC disclosed that the registration forms for the unified forces and equipment needed for cantonment are already being transported to the cantonment sites.

The warring parties are behind schedule as they are left with only three months of the six-months extended pre-transitional period they earlier agreed upon to conclude outstanding issues like cantonment of forces, demarcation of tribal boundaries and determining the number of states.

South Sudan descended into civil war in late 2013 and the conflict has created one of the fastest growing refugee crises in the world.

A peace deal signed in August 2015 collapsed following renewed violence in the capital, Juba, in July 2016.Under the September 2018 peace agreement Machar, together with four others, will be reinstated as vice president of South Sudan. Enditem