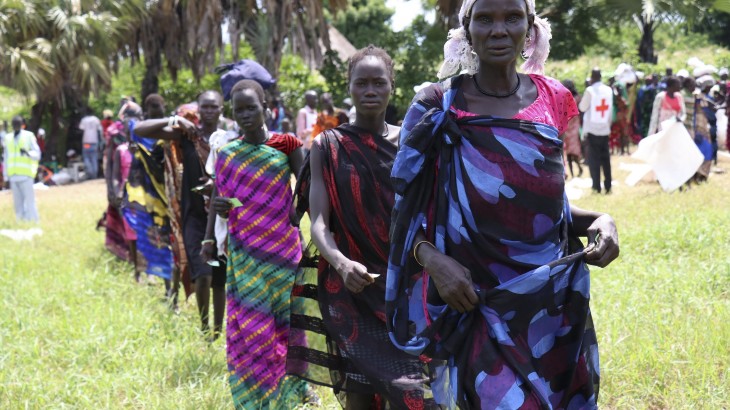 A statement from James Reynolds, ICRC's head of delegation in South Sudan, on the situation in the country one year after the signing of the Revitalized Agreement on the Resolution of the Conflict in South Sudan

Juba (ICRC) – One year after the signing of the peace deal, violence is still pervasive in South Sudan, as clashes between communities threaten lives and the fragile stability.

Surgical teams from the International Committee of the Red Cross (ICRC) continue to treat a large number of patients with gunshot wounds, while needs of the most affected communities remain high. Redoubled efforts are needed to bring a durable peace.

The number of patients with injuries from violence admitted to our surgical units have increased since the signing of the peace deal. From October 2017 to June 2018, 526 patients were admitted, mostly with gunshot wounds. The same period a year later (October 2018 to June 2019) we had 688, an increase of nearly 25 percent. In only one week in April, the ICRC evacuated by air 39 patients with weapon wounds to a hospital we support, forcing us to increase the number of beds in the unit by a third to accommodate the needs.

Violence is also impacting health centres. ICRC teams have collected information on 24 incidents in which facilities were looted or staff threatened since the signing of the peace deal, and this data may only reflect part of the incidents affecting health structures and personnel. In a country where so few health care facilities are functioning after decades of war and under-development, the closure of even one clinic means entire communities go without care, turning preventable, treatable diseases deadly.

The last year has also seen little improvement for most South Sudanese. There are more people facing food insecurity today in the country than at any point since the armed conflict between government forces and the opposition started more than five years ago. People are living in limbo, and recent clashes in some parts of the country, such as Equatoria, continue to displace thousands of people who are then unable to harvest their crops and instead rely on humanitarian aid.

Families have been torn apart by decades of conflict. Today, the ICRC is searching for more than 4,200 South Sudanese whose relatives have reported them as missing. Tragically, with four million South Sudanese still displaced inside the country and across its borders, the number of people who do not know where their loved ones are is likely much higher. Knowing the fate of their missing relatives would offer many South Sudanese the opportunity to move on.

The ICRC has been in South Sudan since its independence in 2011. We also served the needs of South Sudanese during the Sudan's long war. We can say through firsthand experience that it is impossible to exaggerate the toll that decades of war, violence and uncertainty have had on communities.

It is our hope that the peace deal holds. The return to full-scale conflict in South Sudan could mean that civilians are again exposed to deliberate attacks and displacement, despite being protected under international law.

However, even if today's current conditions hold, the levels of violence in South Sudan between communities, made possible by the easy access to guns in the country, will continue to threaten the peace and stability that South Sudanese need to recover and rebuild a country that has largely only known war.

We have 212 guests and no members online