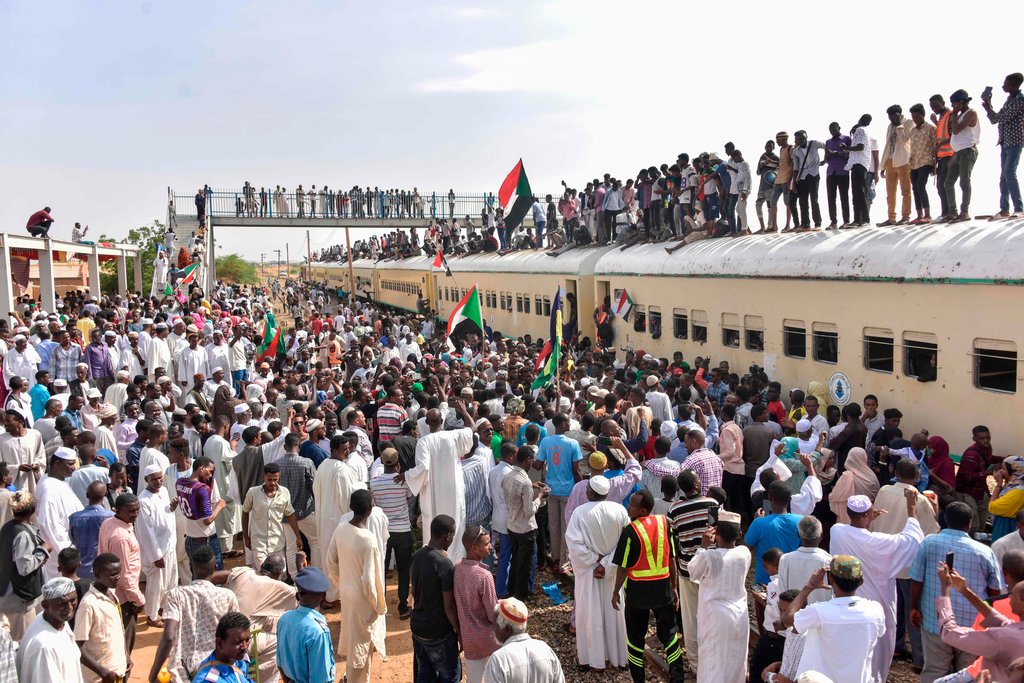 Arriving in Khartoum, Sudan, on Saturday to celebrate the signing of a power-sharing deal outlining the country’s transition to civilian rule.CreditCreditAhmed Mustafa/Agence France-Presse — Getty Images

Sudan’s military and civilian leaders signed a landmark power-sharing deal at a joyous ceremony in the capital, Khartoum, on Saturday, signaling a new chapter in the life of the sprawling African country, which has been rocked by eight months of popular protests, a coup and a bloody military crackdown.

Few Sudanese could have imagined only a year ago that Omar Hassan al-Bashir, their despised ruler of 30 years, would be languishing in Sudan’s most notorious prison awaiting a trial on corruption charges that is expected to start on Monday. Street celebrations, with music, poetry and fireworks, were held across the country Saturday.

In a region where numerous revolutions have failed or horribly backfired in recent years, the Sudanese hope to be an exception.

But for many, the euphoria was tempered by the painful realities of the country’s economic collapse, and the tough compromises of a power-sharing deal[1] that ensures the military, led by some of Mr. al-Bashir’s closest deputies, will retain its grip on power.

“We’re putting everything on this,” said Mohamed Azhary, one of many young doctors who took to the streets to oust Mr. al-Bashir. “People are feeling optimistic, but there’s a lot of mixed feelings, too. We are praying for the best.”

The extent of the concessions agreed to by Sudan’s revolutionaries was evident at the ceremony on Saturday when Lt. Gen. Mohamed Hamdan, a paramilitary commander whose forces led a brutal crackdown on protesters in central Khartoum on June 3, signed the agreement on behalf of the military junta.

Ahmed al-Rabia signed on behalf of the main opposition coalition, the Forces of Freedom and Change. Foreign dignitaries included the Ethiopian prime minister, Abiy Ahmed, who helped rescue the power-sharing talks after a crackdown in June in which at least 128 people were killed.

The agreement signed Saturday paves the way for a transitional government led by Abdalla Hamdok, an economist, to take power on Sept. 1. The new administration replaces the military junta that ousted Mr. al-Bashir in April and is expected to govern for just over three years, until elections can be held.

The military, which has dominated Sudan since it gained independence from Britain in 1956, retains the upper hand in the new administration. While Mr. Hamdok will head a technocratic administration, overall power will lie with a sovereign council led for the first 21 months by a military officer, Lt. Gen. Abdel Fattah al-Burhan.

Additionally, the military will control the defense and interior ministries, which account for a large part of national spending and were responsible for some of the worst abuses under Mr. al-Bashir.

“It’s a very tough compromise,” said Sara Abdelgalil of the Sudanese Professionals Association, which played a key role in the protest movement[2]. “We just hope that we will achieve a civilian-led government at the end of the three years. And if we fail, we will go back to the street.”

On Saturday, though, many Sudanese were ready to celebrate at least the possibility of a new beginning in a country that endured decades of famine, conflict and international isolation under Mr. al-Bashir.

The uprising that culminated in his ouster[3] on April 11 excited the hopes of young people, especially women, who yearned to end his system of harsh Islamist rule. It nursed the hopes of rebels in restive areas like Darfur and the Nuba Mountains that they might finally reach a settlement with the central government.

But the terms of the power-sharing deal itself were set in blood after the crackdown on June 3[4] led by General Hamdan’s Rapid Support Forces, a notorious paramilitary unit that rampaged through central Khartoum in a storm of shooting and rape.

Many weeks later, bodies of dead protesters were still being recovered from the Nile, some with concrete blocks tied around them. General Hamdan[5] has since emerged as arguably the most powerful figure in Sudan, even if he is outranked by General al-Burhan.

The trial expected to start in Sudan on Monday is a “positive step toward accountability,” said Joan Nyanyuki of Amnesty International, but Mr. al-Bashir should be held accountable for abuses committed against his own people. “Omar al-Bashir has evaded justice for far too long as the victims of horrific crimes still wait for justice and reparations,” she said.

The deal signed Saturday was witnessed by President Salva Kiir of South Sudan who arrived in his trademark black hat. South Sudan broke away from Sudan in 2011 to form the world’s newest country.

But few women were present in the hall, underscoring complaints that while women played a prominent role in the uprising against Mr. al-Bashir, they have been underrepresented or ignored in the power-sharing talks that followed.

Ms. Abdelgalil of the Professionals Association said that at least one of the five civilians on the 11-person sovereign council is expected to be a woman, and she hoped that many more would serve in the government.

“We will see and count when the ministers are announced,” Ms. Abdelgalil said.

The new administration inherits a country in economic collapse, with soaring inflation, shortages of food, fuel and electricity, and a crumbling infrastructure that caused large areas of Khartoum to be flooded by seasonal rains in recent weeks. Public fury over tripling bread prices set offthe first protests[6] against Mr. al-Bashir in December, and experts warn that Sudan needs urgent international assistance to stabilize its perilous economic situation and ward off further unrest.

The United States holds a significant lever in the form of its decades-old designation of Sudan as a state sponsor of terrorism which, if lifted, would open the economy to investment.

Yet many experts worry that the new interim government will present rapacious generals with a fresh chance to enrich themselves and their supporters.

General Hamdan and other generals have faced accusations of smuggling, illegal gold trading and other forms of corruption. The Sentry, an investigative group of rights advocates and policy experts that tracks the proceeds of war crimes in Africa, has called for any international assistance to Sudan to be coupled with pressure for military reforms.

“The companies they control are looting Sudan’s resources and budget for their personal enrichment,” said John Prendergast of the Sentry. “If this mafia network isn’t countered in some way, the prospects for peace and democracy are very dim indeed.”

We have 178 guests and no members online