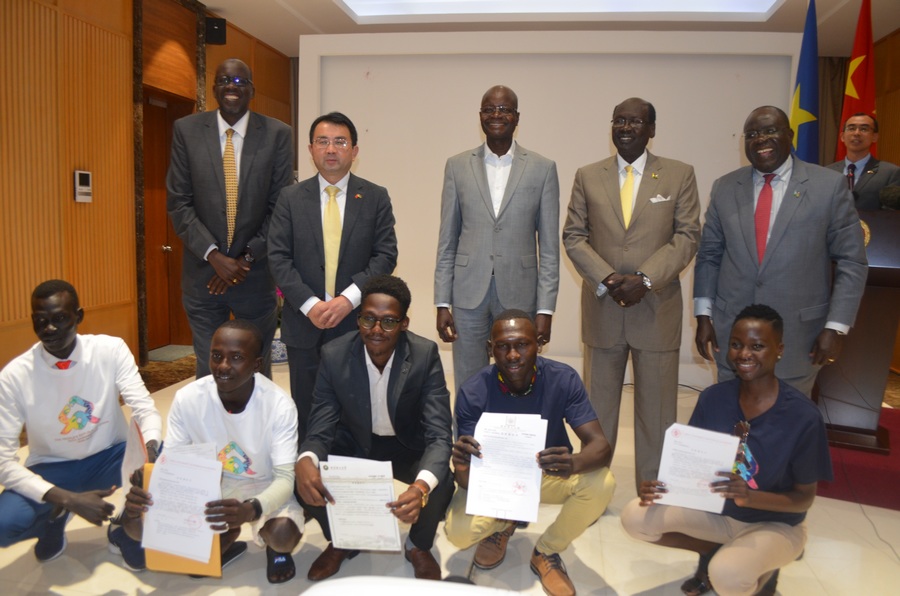 Hua Ning (2nd row, 2nd L), Chinese Ambassador to South Sudan poses with some of the South Sudanese students that were awarded scholarships to study in China, in Juba, capital of South Sudan, Aug. 15, 2019.(Xinhua/Denis Elamu)

With the most recent 29 South Sudanese students who are going to study in China, thousands of South Sudanese have benefited from Chinese government scholarships covering both undergraduate and masters studies over the past years.

JUBA, Aug. 17 (Xinhua) -- At least 29 South Sudanese students on Thursday received scholarships from the Chinese government to study in various fields of science and technology in some of the prestigious universities in China.

Hua Ning, Chinese Ambassador to South Sudan said the scholarships form part of Beijing's efforts to boost peace and development in the youngest nation seeking recovery from more than five years of conflict.

"Today I have the great pleasure to meet so many outstanding young South Sudanese who are going to China to pursue your dreams and also those who have finished your study in China and returned to South Sudan. I see in all of you the hope of South Sudan and the future of China-South Sudan relations," said Hua during the handover ceremony of the scholarships in Juba.

He disclosed that China aims to strengthen its bilateral relations and friendship with South Sudan under the Forum on China Africa Cooperation (FOCAC) and Belt and Road Initiative (BRI) which will see Juba benefiting from trade and infrastructure development funded by the Chinese government.

"China is willing to work with South Sudan to implement the outcomes of the FOCAC Beijing summit and the consensus between our two heads of state, and strengthen cooperation in the fields of infrastructure, agriculture, education, health and energy, bringing bilateral relations to a new level," said Hua.

"With South Sudan's peace process continuing to advance, China will strengthen cooperation with South Sudan under the framework of the FOCAC and BRI, so as to bring more benefits to our two peoples," he added.

He said China has produced over 1 million copies of grade one textbook for South Sudan's primary school students. Juba Teaching hospital and Wau-Jur river bridge project will soon be launched.

Yien Oral Lam Tut, minister for higher education urged the beneficiaries to study and engage more with the Chinese people in order to acquire knowledge and also learn about their unity as a nation amid diversity.

"China is a very close ally and friend of South Sudan it has been our friend for a very long time it has been our friend at the time of need and therefore it's a friend indeed. We are grateful to the people and the government of the People's Republic of China for all the support that we received over the years in various fields notably in the field of oil sector, education and health," said Hoc.

He disclosed that the country needs educated people in order to achieve seven key goals in its Vision 2040 blueprint to build an educated and informed nation by 2040.

"We cannot achieve that without our people getting opportunities to be able to learn and specialize to acquire the knowledge, skills and attitude needed for us to develop South Sudan to become the country we want," said Hoc.

Thousands of South Sudanese have benefited from Chinese government scholarships covering both undergraduate and masters studies at the various universities over the past years.

We have 101 guests and no members online