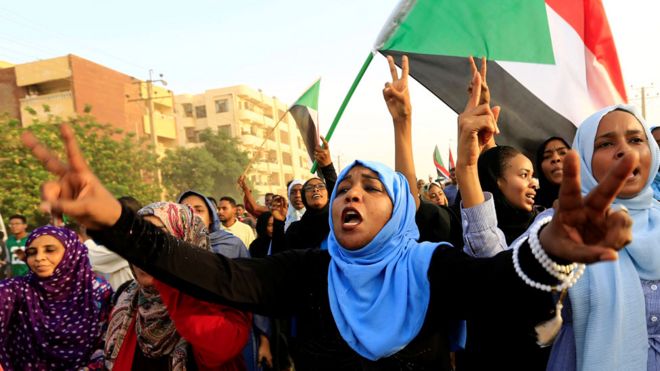 Image copyright Reuters : A march was held on Saturday to mark 40 days since the killings of pro-democracy campaigners.

A Sudanese protester has been shot dead by members of a feared paramilitary group, pro-opposition doctors say.

The man was shot in the head by members of the Rapid Support Forces (RSF) in the south-eastern Sinnar state, during a protest against allegations of RSF brutality, they say.

Neither the RSF nor Sudan's ruling military council has commented.

The shooting comes as the signing of a power-sharing deal agreed earlier this month has once more been delayed.

The military seized power in April following months of street demonstrations against long-time leader Omar al-Bashir but the protest leaders feared that real power remained in the same hands and continued their sit-ins.

The march in the Sinnar town of al-Suki was called to demand that RSF fighters leave the town, which lies 340 km (201 miles) south-east of the capital, Khartoum.

"RSF members deployed and initially started shooting in the air but later they opened fire at residents, killing a man and wounding several other people," a witness, who declined to be named for security reasons, told the AFP news agency.

On Saturday, thousands of people marched through Khartoum calling for justice for those killed on 3 June, when the RSF attacked a protest camp, reportedly killing at least 128 people - a figure disputed by the military authorities.

Some of the marchers lit candles, while others used the torches on their mobile phones to commemorate the "martyrs", on the 40th day since their deaths, an important milestone in many cultures.

What happened on 3 June?

Two men who said they were serving RSF officers have told the BBC that the attack was ordered by the RSF leadership. Their allegations could not be independently verified by the BBC.

Media playback is unsupported on your device

The RSF leadership has denied responsibility, and claimed that rogue elements were behind the attack.

The RSF grew out of the Janjaweed militia which was accused of carrying out a genocide in the Darfur region of western Sudan[1].

What's going on with the talks?

The RSF commander, General Mohamed Hamdan "Hemeti" Dagolo, is the vice-president of the military council, seen by many as the real power in the country.

On Saturday, he gave a speech calling for all Sudanese to support the power-sharing deal and warned that without it, there was a risk of Sudan sliding into civil conflict.

Under the deal, the military would head a transitional authority for 21 months, with a civilian figure in charge for the next 18 months, after which elections would be held.

The agreement, brokered by African Union negotiators, also included a pledge to investigate the recent violence.

However, it has still not been signed 10 days after it was agreed, with negotiators reported to still be haggling over the details.

We have 160 guests and no members online