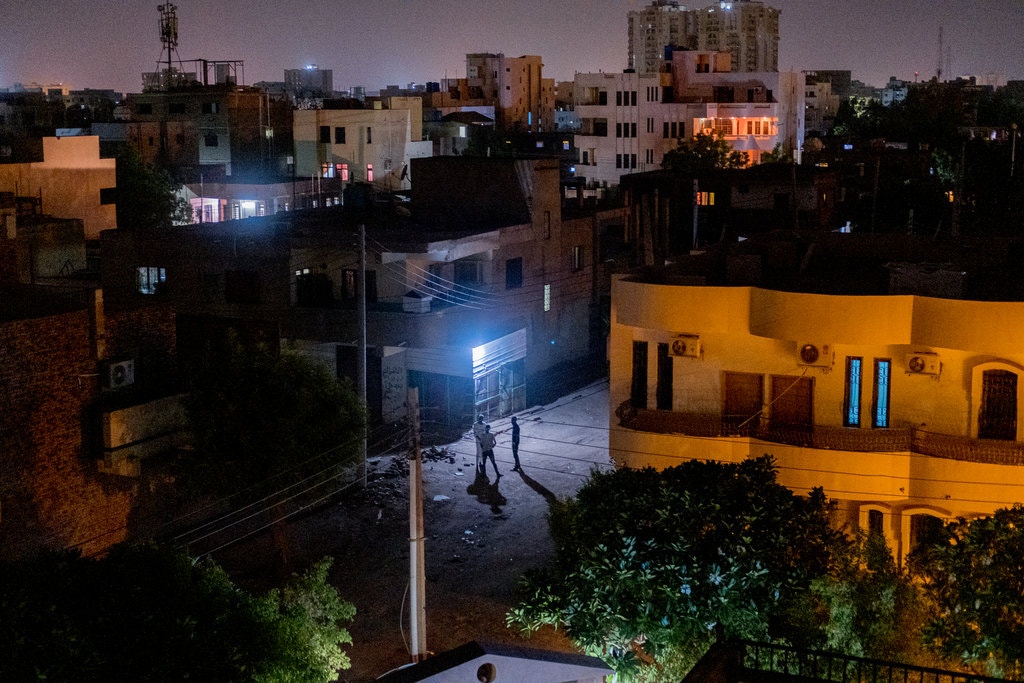 Burri, a Khartoum neighborhood that was at the center of protests in Sudan. Credit Declan Walsh/The New York Times

KHARTOUM, Sudan — The young doctor had been on the run for days, hiding in a quiet corner of the fear-filled Sudanese capital, Khartoum, his wounded head swaddled in bandages.

Dr. Ali, 24, helped treat the wounded, then was attacked himself. Now he was lying low at a friend’s apartment. His smartphone, once a key tool of protests, lay inert on a table: the government had cut internet access. He dared not venture outside, where paramilitaries roamed the streets.

For the protesters who have dared challenge the military rulers in the vast African nation of Sudan, it seemed a gloomy moment — yet another Arab uprising thwarted by autocracy, violence and repression. But Dr. Ali remains defiant, even hopeful.

“This is not the end of the revolution,” he said. “It’s just the beginning.”

Sudan drew the world’s attention a few months ago when thousands of protesters besieged the capital, fed up with economic hardships and the 30-year reign of President Omar Hassan al-Bashir.

Under intense pressure the military generals surrounding the president forced him to step down, started running the country themselves and promised change. But the heady optimism created by Mr. al-Bashir’s downfall gave way to new tensions, as the generals resisted protester demands for a swift transition to civilian rule. Then, with little warning, came the crackdown a week ago.

Despite Dr. Ali’s upbeat attitude, Sudan’s underground revolutionaries are arrayed against formidable forces, inside and outside the country.

On Sunday they made a new bid to wrest control from the military junta with a general strike that paralyzed Khartoum and other major cities. Streets were largely deserted and shops shuttered. Protesters mounted barricades on suburban streets. The security forces killed at least three protesters, doctors said.

The protesters have much ground to regain. Their field of dreams, the vast protest site at the gates of the military headquarters in Khartoum where an exuberant crowd helped topple Mr. al-Bashir in April, lay in ashes.

On a drive through the site on Saturday, walls once covered in revolutionary graffiti had already been whitewashed. A handful of vehicles drove at speed through a ghostly landscape.

The Rapid Support Forces, the notorious paramilitary group that led last Monday’s bloodshed, has an iron grip on the city. On major streets, soldiers cluster under trees or lounge around pickup trucks mounted with machine guns. In the south of the city, dozens of military vehicles line the inside wall of a sports stadium. Dozens more are parked in a nearby recreational park.

The most powerful man in the capital is widely considered to be Lt. Gen. Mohamed Hamdan, known as Hemeti, the leader of the Rapid Support Forces — even if the junta is formally led by another general, Lt. Gen. Abdel Fattah al-Burhan, of Sudan’s regular army.

A onetime camel trader, Hemeti rose to prominence as a commander of the feared janjaweed, the militia accused of genocidal atrocities in Sudan’s Darfur region in the 2000s. Now he has turned his troops on Khartoum, with backing from powerful patrons in Saudi Arabia and the United Arab Emirates who have lavished him with money, weapons and advice.

Emirati-made armored vehicles patrol the streets of Khartoum. The Saudis and Emiratis have pledged $3 billion in aid to prop up the ailing Sudanese economy. Hemeti flew to Riyadh to meet the Saudi crown prince, Mohammed bin Salman, last month.

“They offloaded a lot of heavy boxes and some military vehicles,” he said.

Faced with overwhelming force, and the evident ruthlessness of the Rapid Support Forces, the protesters, most of them young Sudanese and led by doctors and other professionals, have gone underground.

The internet blackout is hurting them badly.

During the 11-week uprising that toppled Mr. al-Bashir, protesters used social media to organize, dodge the security forces and publicize abuses. Now just a handful of hotels and some homes are connected to the internet, leaving protesters stranded.

“They don’t want the truth to be shown to the world,” said Ahmed Babikir, a dentist, speaking by phone from a hiding place in the Burri neighborhood, a hotbed of protests.

The one time he ventured out in recent days, he said, was to get a haircut — so as to avoid Support Forces troops roaming the streets who were forcibly cutting the hair of suspected protesters. “The only place I’ve been is the barber,” he said.

A handful of protesters who still have internet access have publicly posted their Wi-Fi passwords, encouraging others gathered outside their homes to log on. Most are reduced to watching state TV, with its skewed version of reality.

On Sunday, Sudan TV claimed the strike was a failure and sought to portray the protesters as dissolute and immoral, broadcasting footage of Sudanese women in Western-style clothing, and an interview with a man who said he had wanted to attend the protests to consume alcohol and hashish.

The survivors of last Monday’s dawn raid painted a much more sinister picture.

The military initially justified the operation by claiming that it had targeted “Colombia” — a patch of grass along the Nile, close to the protest area, that has long been known for drug dealing in Khartoum. Protester numbers were low: many had gone home for Eid-al-Fitr, a major Muslim holiday starting the next day, and heavy rain knocked out the lights at the protest site.

Mustafa and Ibrahim, final-year medical students, were there when the shooting started and helped treat the wounded at a field clinic.

At first wounded protesters flooded in with gunshot wounds or broken limbs, having been attacked by troops wielding staves and whips, said the medical students, who declined to give their full names, fearing reprisals.

Bursts of gunfire punctured the clinic’s walls. Wounded patients jumped for cover. A Rapid Support Forces officer, no older than 16, broke in and started beating patients. “He appeared to be high on a stimulant,” Ibrahim said.

Protesters hiding inside the clinic were dragged outside and beaten. “It was like in the movies, when they hit a guy in the face with a gun,” said Ibrahim. “Crazy.”

The medics said they had tried to carry a grievously wounded patient on a stretcher to a hospital half a mile away. Stepping outside, they were stunned by what they saw: thousands of fighters, filling the protest area in every direction.

“Every one of them was doing something,” Ibrahim said. “Breaking or destroying a car. Beating up an injured civilian. Burning a tent. Or destroying whatever they can.”

As they pushed through with the stretcher, helped by two military officers, others hit the medics or used their phones to photograph the wounded patient. “They said things like: ‘I hope he dies. This is what you get for doing this revolution,’” Mustafa said.

The Sudanese Professionals Association, which helped lead the protests that toppled Mr. al-Bashir, has ordered supporters to avoid confrontation with the security forces during the general strike, which they say will last until the military cedes power. But they are faced with the might of Mr. Bashir’s notoriously harsh security apparatus, now enthusiastically reasserting itself.

“The deep state still exists and is still running the country; you can feel it everywhere,” said Rudwan Dawod, an opposition leader. “Systematically, we are still in the Bashir era.”

On the table before Mr. Rudwan lay a couple of SIM chips — like many people, he is abandoning his regular phone numbers to avoid surveillance or arrest.

The military hopes to counter the strike with targeted intimidation. One major focus is to keep the Khartoum airport running.

Last week Adil Mofti, a businessman who runs a major air services company, told his staff it was safer to stay home. On Thursday, he was summoned by the security forces.

“I hope you will hear from me again,” he said by phone before leaving home.

On Sunday morning, relatives said they had learned that Mr. Mofti fell into a diabetic coma in detention after his request for medication was denied. His wife expressed fear he might die.

Behind the displays of unity, cracks are showing inside the protester ranks. Some criticized their leaders for having failed to negotiate a power-sharing deal with the military since April. Others blamed themselves for not seeing the crackdown coming from Hemeti, the Support Forces leader.

“We knew he was a criminal from the beginning,” said Mr. Ali, the doctor in hiding. “But we couldn’t fight everyone then. So we just looked the other way.”

We have 365 guests and no members online