Democratic transition in Sudan is hanging by a thread

Ethiopian president Abiy Ahmed has a tough job ahead trying to mediate in the conflict in Sudan, where a fragile transition to democracy is in deep trouble after the military junta launched a bloody crackdown on civilian protesters.

Sudan’s transition to democracy is hanging by a thread as civilian protesters launch a nationwide civil disobedience campaign and Ethiopian President Abiy Ahmed tries to mediate between the civilians and the military junta running the country.

South Africa has been urged to give full backing to Abiy Ahmed and the Sudan opposition, using its seat on the UN Security Council to block spoiling tactics by Russia and China.

Abiy visited Sudan’s capital, Khartoum, on Friday, 7 June 2019, and met both sides in the conflict. Protracted negotiations between the civilian protesters and the junta about which side should control the transition to new elections broke down on Monday, 3 June 2019, when military forces violently dispersed a sit-in protest in front of defence headquarters in Khartoum. Up to 100 demonstrators were killed.

The African Union (AU), largely backed by the international community, is now pinning its hopes for peace on Abiy. The civilian protesters, who call themselves the Declaration for Freedom and Change (DFC), have welcomed his intervention but the junta, which styles itself the Transitional Military Council (TMC), said nothing after meeting him on Friday and so it is unclear if it is backing his mediation.

And the military junta arrested three opposition leaders after the meeting with Abiy, suggesting opposition to the mediation. These arrests prompted the protest leaders of the DFC to declare a nationwide campaign of civil disobedience, starting on Sunday, 9 June 2019.

The apparent absence from the talks with Abiy of Mohamed Hamdan “Hemeti” Dagolo, the vice-president of the TMC, is also causing concern, says Andy Atta-Atamoah, a senior researcher at the Institute of Security Studies in Addis Ababa.

Dagolo also heads the notorious Rapid Support Forces (RSF) – commonly dubbed the janjaweed – who have been responsible for many atrocities in Sudan and who have also been blamed for the bloody crackdown on the protesters in Khartoum on Monday, June 3 2019. The protesters claim about 100 of their number were killed, including 40 whose bodies were dumped in the Nile. The junta insists the death toll was 46 and Hemeti has justified the crackdown on the basis that rogue elements and drug dealers had infiltrated the protest.

The violence on June 3 was preceded by a long stand-off between civilian protesters and the military council. The peaceful political protests began in December 2018 as demonstrations against sudden rises in the prices of bread and other commodities, but then grew into a wider political demand for a change in government. On April 11 2019, the pressure forced the removal of President Omar al-Bashir after more than 30 years in office. But the military took over and has insisted that it will remain in power throughout the transition.

Atta-Asamoah said Hemeti’s apparent absence from the talks with Abiy underscored concerns that the TMC may be splintering, with very uncertain consequences for the negotiations and the prospects of democracy and peace.

Sudan’s future now depends on the skill of Abiy’s mediation which has been fully backed by the AU Commission chairperson, Moussa Faki. The AU has taken a tough line against the military junta. The AU’s Peace and Security Council met in Addis Ababa after the military crackdown and suspended Sudan’s membership of the AU. It also threatened to impose sanctions against the leaders of the military council if the council did not immediately hand over power to a civilian-led transitional authority.

Abiy’s task has been enormously complicated by the rise in mistrust and suspicion since the violence last Monday, he said. After the attack, the military council under General Abdel Fattah al-Burhan initially called off negotiations and declared unilaterally that it would remain in power until elections for a new government in nine months’ time. Later Al-Burhan backed down and said the junta was ready to resume negotiations.

But the civilian DFC leadership has meanwhile refused to return to the negotiating table until the military meets several conditions. These include an acknowledgement by the TMC of crimes committed by the military; an investigation into the violent dispersal of the sit-in on June 3; the release of political detainees and war prisoners; allowing public freedoms, including freedom of the press; and the dismantling of military blockades throughout Sudan.

One international diplomat close to the negotiations expressed concerns that Egyptian President Abdel Fattah El-Sisi, who is chairing the AU, might succeed in his efforts to soften the tough line taken by the AU Peace and Security Council against the military junta last week. Egypt as well as Saudi Arabia and the United Arab Emirates, none of them democracies, have all been backing the Sudanese military.

But Atta-Asamoah said that although these states had been pouring billions of dollars into supporting the Sudan military, the violent crackdown on June 3 had made it difficult for them to continue supporting the military unconditionally. He said it would be interesting to see if they now joined the growing calls for an official investigation into the crackdown.

Atta-Asamoah also noted that Egypt, Saudi Arabia and the UAE were increasingly at odds with the official AU position. He said it was significant that in his statement welcoming Abiy’s mediation, Faki had explicitly called on “foreign actors to refrain from interference and support the African Union efforts to support a Sudanese-led and owned process that respects the will and aspirations of the people of Sudan, the region and the continent”.

Although the international diplomat assigns some of the blame for the impasse to the rigid positions of some leaders of the DFC civilian protest movement, Atta-Asamoah believes the blame lies squarely with the military.

“After initially saying that they were ready to hand over power to civilian authority, the military council grew much too confident in their position and insisted on maintaining control.

“They should have just stabilised the situation [after Bashir was ousted] and then returned to their barracks.”

Francis Kornegay, of the Institute for Global Dialogue, said he believed South Africa should contribute to the Sudan peace effort by using its position on the UN Security Council to mobilise support for Abiy’s peace initiative and for the AU Peace and Security Council’s suspension of Sudan.

Last week, both Russia and China opposed efforts by Western powers to get the UN Security Council to issue a strong statement condemning the Sudanese military for the bloody crackdown on the sit-in protest.

Kornegay said, “South Africa should be in an unassailable position in the run-up to its AU presidency [next year] and as the outgoing Brics president, to support the Sudan opposition and Ethiopia in a manner that manoeuvres China and Russia into at the very least not opposing the current Ethiopian process.”

He said that would help resuscitate South Africa’s continental leadership in anticipation of its AU presidency in 2020. DM

Photos: 'Nubian queen' becomes the face of the Sudan protests (Provided by MSN) 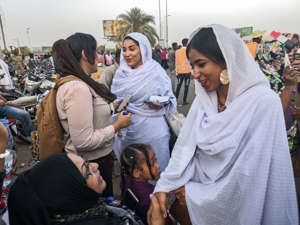 We have 201 guests and no members online